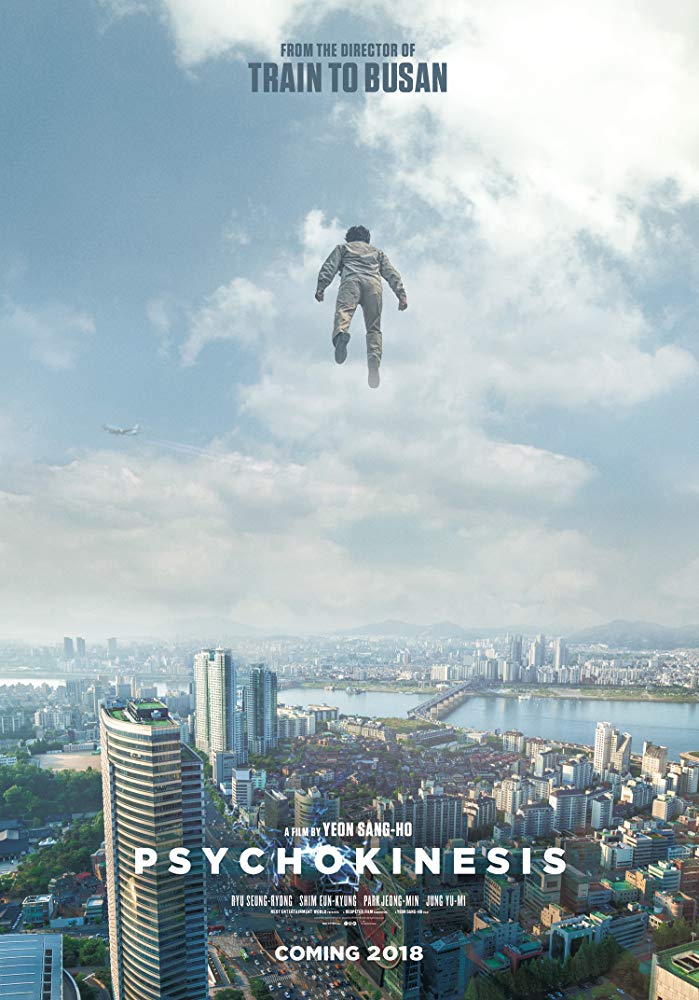 Ru-mi and her mother run a successful fried chicken restaurant. All the business owners on the street are under pressure from the Taesan Construction Company to get out because their buildings are wanted for redevelopment but are refusing to move. One night, Taesan thugs burst in and begin vandalising the restaurant. Ru-mi’s mother is killed when she tries to stand against them. Ru-mi’s estranged father Shin Seok-heon, who works as a security guard, is called to attend the funeral. There he is witness to a showdown between Ru-mi and Taesan thugs headed by Mr Min. Seok-hoon has drunken water from a fountain affected by chemicals from a passing meteorite. He begins to develop the ability to levitate objects with his mind. He goes to visit Ru-mi and is able to use these powers to drive off the Taesan thugs. This makes him the hero of the neighbourhood, although Taesan then plot ways to be rid of him so that they can clear the area.

South Korean director Yeong Sang-ho made a big international splash a couple of years before this with the zombie film Train to Busan (2016) and its animated sequel Seoul Station (2016). Prior to that, Yeong had made the animated films The King of Pigs (2011) and The Fake (2013), Psychokinesis was his live-action follow-up to Train to Busan.

The term Psychokinesis initially makes you think you are in for another psychic powers film. We have seen a number of these over the years from The Power (1968), Carrie (1976), The Fury (1978), Scanners (1981), Firestarter (1984), Akira (1988), Push (2009), The Mind’ Eye (2015), Freaks (2018) and The Darkest Minds (2018). There was even a South Korean film on the subject released around the same time as this with The Witch: Part 1 – Subversion (2018). And there are a number of scenes during the first third – with Ryu Seung-ryong demonstrating his powers by levitating objects, throwing attacking goons across the room – that indicate that this is the direction that Psychokinesis is going.

Psychokinesis certainly starts out looking like it is wheeling familiar plot devices into place – the down-on-his-luck loser who suddenly gains powers; the deadbeat father connecting with his peppery daughter who has issues but you know they are going to reconcile by the end; the small businesspeople resisting gentrification of their neighbourhood and the big evil corporation that is wanting to move them out – I kept being reminded of Batteries Not Included (1987) in these sections.

In the fairly easy plot arcs it seems to be wheeling into place, Psychokinesis seems to be aiming for middle-of-the-road commercial mainstream play. On the other hand, Yeon Sang-ho starts to take it in interesting places. Well I suppose if I had been subject to the Korean publicity campaign, I would have been more aware – there it was pitched as a Korean superhero film.

The surprise is that after about the two-thirds point, Ryu Seung-ryong’s psychic powers take a leap into outright superheroics. There’s a triumphal scene where Ryu bursts out of the jail cell and then races across the city in leaps and bounds, jumping in between traffic and bouncing off the sides of buildings. The siege is impressively scaled where it looks like the filmmakers have built an entire city block, filled it with extra dressed in police riot gear and even set it on fire before demolishing it. There are some entertaining scenes with Ryu Seung-ryong sweeping masses of cops aside, lifting a group of people free from a burning building, flying in to save a man hanging from a fire escape railing, and saving his daughter as she hangs from the end of a crane. The down-to-earth ordinariness of its superhero – Ryu Seung-ryong goes into action wearing no cape or armour, just a regular pair of pants and a coat – makes a refreshing change from the universe-shattering heroics of the MCU.

The latter third of the film ends up being stolen by Jung Ju-mi who gives a show-stealing performance as a corporate heavy sent in to sort the shambles out. Her tactics – calling for help as her men beat up the gang’s leader Kim Min-jae so that she can have a legal alibi, or the nastily manipulative deal she offers Ryu Seung-ryong to go to jail – all of which is delivered with complete assurance and a winning smile proves immensely entertaining.

One thing the film did leave me wondering was just how corrupt is the South Korean police force? Here we see them operating at the behest of a powerful corporation, even being ordered into action by a small-time gang leader and engaged in highly dubious actions such as beating protestors. At one point, they set the barricade on fire while protestors are still on top of it. In another scene, they turn a firehose on a man who is hanging for his life from a fire escape railing with no apparent concern for his safety and without anything to catch him below. It may be that there is some domestic comment that Yeong Sang-ho is making about Korean police here.

(Nominee for Best Supporting Actress Jung Ju-mi at this site’s Best of 2018 Awards).