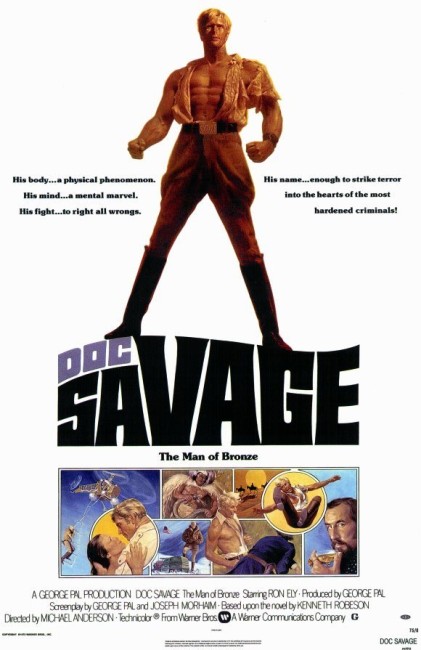 Master crimefighter and scientific genius Clark ‘Doc’ Savage Jr receives the news that his father has died from a rare disease in the South American republic of Hidalgo. Doc and his ‘Brain Trust’, a group of five, all experts in their fields, who assist his crimefighting, travel to Hidalgo to investigate. There Doc discovers evidence that his father was murdered. The trail places Doc in a race with the evil Captain Seas to find a tribe of Indians in a lost valley that overflows with gold.

Doc Savage was one of the great pulp heroes of the 1930s and 40s. A creation of pulp writer Lester Dent, who wrote all but two of the adventures under the Street and Smith house name of Kenneth Robeson, the bronze-skinned Doc Savage flourished between 1933 and 1949 for 181 issues of the eponymous Doc Savage Magazine, solving crimes with stoically superhuman derring-do and astringent virtue. The character proved popular and after two decades retirement made a major comeback in the 1970s with all 181 stories being reprinted in paperback by Bantam Books, as well as a Marvel Comic spinoff, several new paperback adventures from various writers, and the character even receiving an amusingly deadpan biography Doc Savage: His Apocalyptic Life (1973) by Philip Jose Farmer. And then there was this film version, which almost served to kill the Doc Savage revival off.

Doc Savage – The Man of Bronze was the final work ever produced by George Pal who died in 1980. George Pal had been a big name in the 1950s as producer and sometimes director of science-fiction classics such as Destination Moon (1950), When Worlds Collide (1951), The War of the Worlds (1953) and The Time Machine (1960). George Pal gambled on the popularity of the character in getting this film off the ground, optimistically taking out an option on all 181 stories. (The end credits even announce a sequel Doc Savage: The Arch Enemy of Evil, although this never emerged).

Certainly, the film achieves an accurate translation of the details familiar to the stories – Ron Ely, Tarzan from the popular Tarzan (1966-8) tv series, is well cast, emerging as a perfect incarnation of one of the Boris Vallejo covers of the Bantam reprints of the books in ripped shirt and artfully bared chest, calf-height boots, bulging biceps and brass ‘Doc’ belt buckle. The Brain Trust looks right, even if the actors play the roles as bumbling idiots. The story of the film touches bases with many parts of the first Doc Savage pulp novel, although imports characters and a villain from other stories.

Unfortunately, while the film is fine for trivia buffs, the rest of it makes one balk. It could have been a great adventure film homaging the classic era of serials in the same way that Raiders of the Lost Ark (1981) was a few years later. Alas, Doc’s fate was the time that the film was made where the prevailing outlook on screen superheroes was overshadowed by the campy unserious tone of the Batman (1966-8) tv series.

The opening sets the stride with twinkles animated over Ron Ely’s eye and the title done out in the colours of the US flag. The villains overplay as though in a mustache-twirling competition, the prize surely going to Bob Corso with scenes in a giant rocking bed, sucking his thumb and stubbing cigars out into telephone receivers. It becomes a sillier and sillier joke on the anachronism of the original stories – the assistants all order non-alcoholic beverages, applause accompanies Doc’s noble speeches on the soundtrack and the final scene shows the villains playing in a Salvation Army band after going through Doc’s rehabilitation program. The climactic martial arts fight with subtitles is the height of absurdity.

If there was still any possibility we were not getting the unseriousness of the exercise, the jaunty score determinedly camps it up at every opportunity. The subsequent adaptation of Superman (1978) showed how superheroics can be done without filmmakers having to be disparaging to the material and the results here are lamentable.

There have been rumoured plans in recent years for a new version of Doc Savage, with the name of Arnold Schwarzenegger being touted at one point during the late 1990s, although this never appears to have gone anywhere. A big screen remake has been announced during the 2010s under writer/director Shane Black and purportedly starring Dwayne Johnson.

Director Michael Anderson has made a number of other genre films including an adaptation of George Orwell’s 1984 (1956); The Shoes of the Fisherman (1968), a political thriller concerning a near-future Pope; the dystopian sf film Logan’s Run (1976); the killer whale film Orca (1977); the psycho-thriller Dominique (1978); the tv mini-series adaptation of Ray Bradbury’s The Martian Chronicles (1980); Bells/Murder by Phone/The Calling (1981) about killer telephone calls; the excruciating Adam and Eve softcore comedy Second Time Lucky (1984); the John Varley time travel film Millennium (1989); the tv movie remake of 20,000 Leagues Under the Sea (1997); and The New Adventures of Pinocchio (1999).