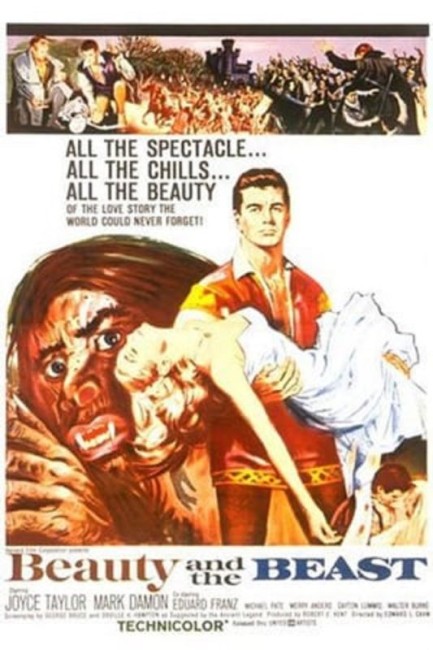 The Lady Althea travels to meet her betrothed, the Duke Eduardo of Arletto. However, when they meet, Eduardo tries to postpone the wedding and convince her to go away. She states she loves him and insists on staying. She soon uncovers Eduardo’s secret – how he suffers from a curse that was placed on him by a sorcerer that his father had ordered walled up, which transforms him into a hideous beast between the hours of dusk and dawn. Meanwhile, Eduardo’s jealous brother Prince Bruno stirs up the villagers to kill the Beast.

Beauty and the Beast has been an oft-filmed fairy-tale – there have been at least thirty plus other films and tv series with the same title (see below). The classic and still unsurpassed version is Jean Cocteau’s extraordinarily beautiful adaptation, Beauty and the Beast (1946).

This version is a rudimentary reworking of the fairytale. It is too mannered and unremarkable. The Beast never has much threat. Edward L. Cahn, a prolific director of B Westerns, crime thrillers and horror movies throughout the previous two decades, directs in a pedestrian manner. Cahn’s direction and the flat Technicolor stock and cardboard sets drown any potential flight of fairy-tale fantasy. More disappointingly, The Beast has now been changed into a standard romantic lead who is merely suffering from a curse that occasionally transforms him into a beast. As the Beast, Mark Damon looks more like an Afrod hippy with fangs, hardly the ‘foul creature from the depths of Hell’ he is described as being. When Beauty’s love finally saves him, it is more a wrap-up of the plot than anything that convinces you about the transforming power of love.