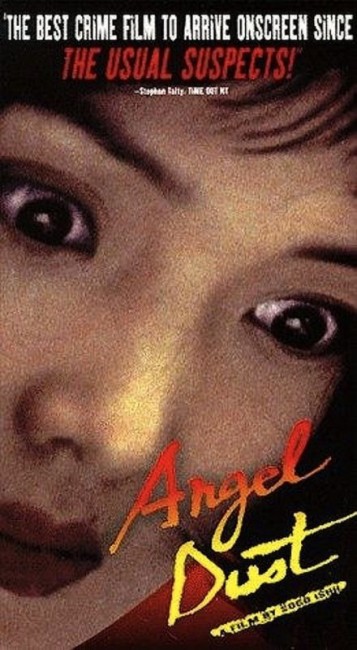 Forensic psychologist Dr Setsuko Suma is brought in by the police to help stop a killer who strikes on the crowded Yamanote Line of the Tokyo subway every Monday at 6 pm, injecting a girl in the neck with a lethal drug. As Setsuko tries to see a pattern in the seemingly randomly chosen victims, the mystery points toward her former lover Dr Rei Aku, who is now working as a cult deprogrammer and whose methods are regarded by many as dubious. Rei insists that the killer is “inside her”. Setsuko decides to undergo a journey of self-discovery in which she tries to identify with the killer and the victims’ – but in so doing so comes back under Rei’s mental control.

You could call Angel Dust a Japanese The Silence of the Lambs (1991) – it features a female psychological profiler trying to piece together the behavioural patterns of a serial killer in the course of which she allows herself to be drawn in by a dangerous, magnetic personality. Despite the similarity of thematic terrain, both are also quite different films – The Silence of the Lambs was a thriller that derived its frisson from the creepy presence of Anthony Hopkins; Angel Dust is more like a stylised art film where the entire journey is the heroine’s one.

Angel Dust is a beautifully composed and serenely cool film – it derives all its shocks quietly, not upfront in traditional thriller ways. There is no blood and butchery – just the quiet, almost understated image of the victims keeling over as subway crowds clear. The confrontation with the ambiguous character at the centre of the story comes not in a subterranean jail cell where he is imprisoned but with Zen-like calm in a landscaped garden.

On the minus side, the film only intermittently works as a thriller plot. It never fully hooks and drags one in with the chill, methodical unfolding of its twists, although there are certainly some unique spins it throws in – there is a genuine surprise revelation about the heroine’s husband’s identity, for instance.

Where the film does work is in its descent along with the heroine – Rei’s enigmatic insistence that the killer is inside her and her attempts to become exactly like the killer herself, eventually journeying down into her near-mental collapse. In Silence of the Lambs, Jodie Foster never underwent such a personal, traumatic association with the object of her inquiry. There are times the film swings striking metaphors – in one scene, the heroine’s husband produces a DVD of Disney’s Sleeping Beauty (1959), likening the syringe murders to Sleeping Beauty’s pricking her finger, and as we watch the heroine cuts her own finger and blood drips onto the sleeve of the video.

Angel Dust comes from Japanese director Ishii Sogo who has been credited by his given name Gakuryu Ishii since the 2000s. Ishii’s other films of genre interest include:- Burst City (1982) set in an anarchic future; the cryptic end of the world film August in the Water (1995); Labyrinth of Dreams (1997) about a woman who is attracted to a man who may be a serial killer; Electric Dragon 80,000 V (2001) about someone with electrically charged super-powers; Isn’t Anybody There? (2012) about a series of inexplicable deaths on a campus; The Flowers of Shanidar (2013) about a valuable medicinal flower that blooms on the chests of young women; and the ghost story Bitter Honey (2016).