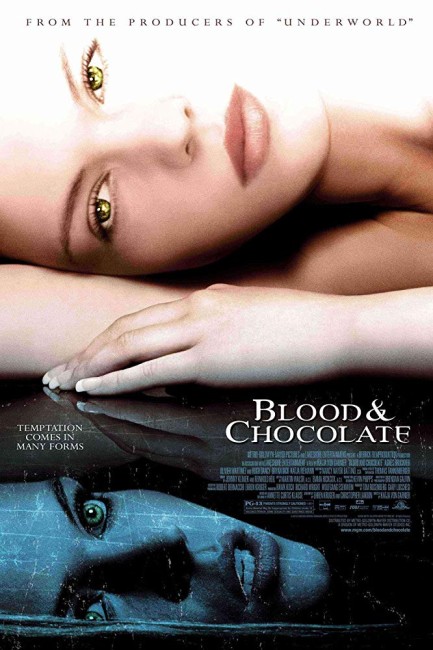 Vivian comes from a family of werewolves and was the only one to escape after the others were slaughtered in Colorado ten years ago. She has found a home among the werewolf community in Bucharest and has a job working in a chocolaterie. Under the leader Gabriel, the local werewolves adhere to a strict code designed to protect them from human hunters. Part of the law is that the leader claims a new wife every seven years. All of the others believe that Vivian will be next chosen as Gabriel’s mate, although this is a fate she does not look forward to. Vivian meets Aiden, an American graphic novel artist who is creating a work based around the local werewolf legends. They are attracted to one another, although she does not tell him anything about her true nature. However, Gabriel’s hot-headed son Rafe, who is seen as the next leader of the werewolf pack, tells Gabriel of their liaison. He is ordered to drive Aiden out of town but instead Aiden accidentally kills Rafe with a silver crucifix. This has his life marked amongst the werewolf community and forces Vivian to go on the run to protect him.

Blood and Chocolate did little business when it came out, it doing a miniscule $3.5 million earnings in the US and going straight to dvd in many other territories. Blood and Chocolate was the English-language debut of German director Katja Von Garnier who had previously made the German-language films Making Up (1993) and Bandits (1997) and was brought to the US to make the tv movie Iron Jawed Angels (2004) about the woman’s suffrage movement. The film is mostly UK and German produced.

Blood and Chocolate is a werewolf film but one that is clearly trying to do something different with the genre. It holds some highly original ideas that we have not seen on screen before – a depiction of the tribal world of the werewolf. We are initially only given partial glimpses of the werewolf society and the principles and hierarchies that it operates on and in a fascinating way that leave us trying to piece what is happening together. Katja Von Garnier makes maximum pictorial use of the Old World locations of Budapest. She creates a constant dreamy atmosphere that builds the city into a fairytale world. She gives many scenes a beautiful lyricism, especially the hunt through the forest – one is constantly reminded of the half-dream, half-fairytale world of Neil Jordan’s The Company of Wolves (1984).

Lead actress Agnes Bruckner seems lacking in much personality and only plays within a limited, closed off range. Equally, Hugh Dancy seems little more than a pretty boy. However, both French actor Olivier Martinez and British newcomer Bryan Dick have fun playing to the gallery and doing the sexy bad boy thing, to which Katja Von Garnier more than happily caters. Bryan Dick in particular plays with a dangerous swagger that steals a large part of the show and clearly pegs him as an actor worth watching in future.

The only aspect I felt disappointed with was the representation of the wolf transformations where Katja Von Garnier has gotten around the need for costly makeup effects or CGI by electing to use the far simpler method of having animated glows represent the transformations. There seems something disappointingly low tech about these – you feel that Blood and Chocolate was a film could have achieved something far more sophisticated.