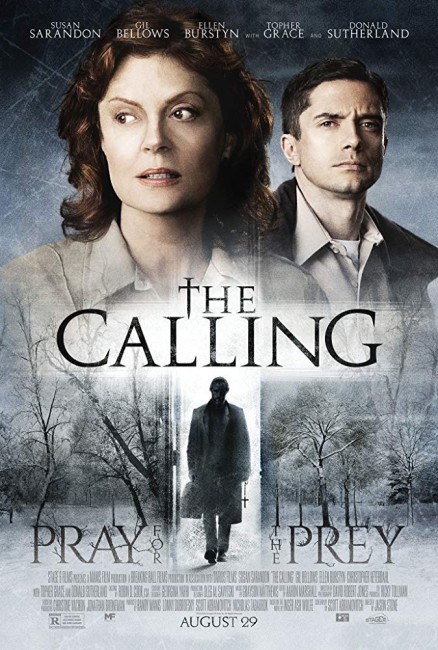 In the small lazy town of Fort Dundas, Ontario, police chief Hazel Micallef is faced with two bodies that have been murdered in near-identical ways. Her provincial superiors reject her theory that it is a serial killer and turn down her request to send more experienced detectives. She proceeds on investigating with the limited resources she has. She and her team deduce that the killer has manipulated the bodies post mortem and discover that the mouths of each victim, along other bodies that have been found in a trail across Canada, have been made to form a Latin prayer. Hazel discovers that this is an archaic Catholic ritual designed to resurrect the dead by offering up thirteen souls. As Hazel pursues the leads, they find themselves on the trail of a genteel healer who is persuading his victims to willingly die.

The Calling is a US-Canadian police thriller. It was a directorial debut for Jason Stone, previously known as, of all things, the director of Jay and Seth Versus the Apocalypse (2007), the short film that became the basis of This is The End (2013). The film is adapted from The Calling (2008), the first in a series of four detective novels featuring Hazel Micallef written by Inger Ash Wolfe, a pseudonym for Michael Redhill, a Canadian literary author, editor and playwright. Despite its US backing, this is one of the few American films that shoots in Canada and doesn’t try to pretend it is an American city – the only other one to do so was Taking Lives (2004).

On screen, The Calling emerges as one among the many serial killer thrillers that followed in the vein of The Silence of the Lambs (1991) having been uplifted and dumped into the midst of Fargo (1996). The film is slow and sedate, something that switched many reviewers off and the film an initial bad rap, which it does not deserve at all.

What the film is not is uninteresting as a thriller – Jason Stone gives it a cool measured pace, often focused around the interaction of a fine character ensemble. Once the plot kicks in, this is well constructed and holds our attention. The plot is rarely ever one that throws in improbable twists or stretches our credibility – although maybe the idea of piecing the faces in autopsy photos together to deduce that the mouths have been left to make a Latin prayer does seem an exceedingly obscure piece of deductive reasoning.

The Catholic serial killer angle has been done before – see films such as House of Mortal Sin/The Confessional (1976), The Rosary Murders (1987) and A Twist of Faith/Beyond Redemption (1999) – but this does interesting things with the idea. The idea of the killer trying to enact obscure rituals of resurrection takes the film closer to the Christian-themed serial killer thriller Resurrection (1999), although by contrast here the enigmatic final scene leaves the film sitting on an ambiguous potentially supernatural note.

The Calling could have easily slipped away and become just tv filler, although did achieve a brief theatrical release. All of the actors – Susan Sarandon as might be expected, a young eager Topher Grace, an aging Ellen Burstyn – give fine performances of many shadings. However, the actor who holds the screen throughout is the relatively unknown Christopher Heyerdahl as the killer. The way he phrases his sentences and seems to be choosing his words, the sagacity and wisdom he radiates along with what is at one point described as “kind eyes”, makes for a decidedly unusual and genteel serial killer, almost the complete opposite of anything we might expect. As a result, he entirely captivates the show whenever he is around.

Jason Stone subsequently went on to direct the SF film First Light (2018), as well as write the script for the horror comedy Teen Lust (2014).