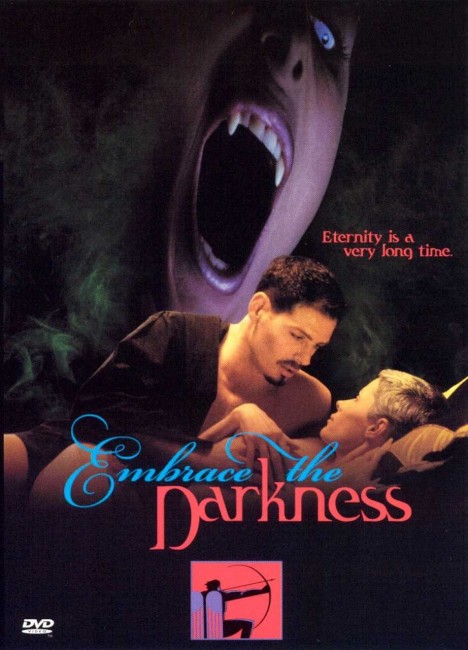 Embrace the Darkness is a work of vampire erotica. This is an idea that seems perfectly logical – after all, there is a huge flourishing body of vampire erotica in both professional and fan fiction. Such is only taking darkly romantic vampire films like To Die For (1989) and Tale of a Vampire (1992) to the next logical level. Vampire erotica has been touched upon before – in mainstream films like Bram Stoker’s Dracula (1992) and the body of softcore lesbian vampire films – The Vampire Lovers (1970), Daughters of Darkness (1971).

However, Embrace the Darkness is the first vampire film that has been made as an actual work of erotica per se. There have been works of hardcore pornography such as Dracula Sucks (1978) and Dracula Exotica (1980) but Embrace the Darkness is made-for-cable softcore erotica, where the emphasis is on sensuality not penetration. There had been one previous venture into the genre of light erotica, the rather terrible, video-released The Nosferatu Diaries: Embrace of the Vampire (1995).

Kevin Spirtas is particularly well cast in this regard. With his handsome good looks, goatee, bared chest under an open shirt, and composing piano music and touching black roses to his lips, he suggests a broodingly sensual melancholy at the heart of the film. Madison Clark has just the right degree of appealingly vulnerable sweetness as the corrupted innocent. With sharply boned face and unusually silver blonde hair, Angelina High has a marvellously predatory presence as Kevin Spirtas’s vampire sister. Thankfully, she does not let the part go camp as many straight films would be wont to do.

One of the most imaginative parts of the film are its small touches of fantastique. In erotica, most fantastique elements tend to be forgotten and treated with prosaic lack of imagination. The vampires here are accompanied by some intriguing touches – Angelina High’s negligee flying up onto her shoulders off the floor (in a simple but effective frame reversal), her tattoo that changes colour, roses dying in Kevin Spirtas’s hand, Spirtas’s mysterious appearances floating outside Madison Clark’s window and most appealingly his being able to tap people on the shoulder while standing down the length of an alley. There is also a superbly eerie and unusual score, principally reliant on violins, accompanying the erotic scenes.

(Nominee for Best Musical Score at this site’s Best of 1998 Awards).