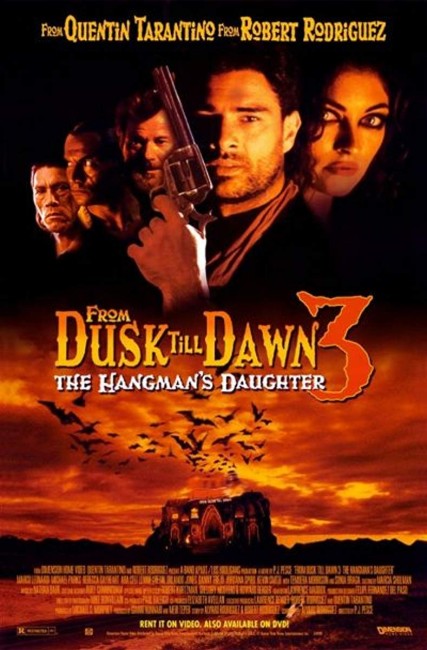 In the 1910s, the outlaw Johnny Madrid is about to be hung in a small Mexican town when a stranger shoots out the noose. Johnny makes an escape, sweeping the hangman’s daughter Esmeralda up and taking her with him after seeing her abused by her father. The hangman swears revenge and gathers a posse. Johnny rejoins his bandits and they raid a stagecoach containing the drunken American writer Ambrose Bierce, on his way to join Pancho Villa’s revolution, and husband and wife John and Mary Newlie, missionaries on their way to deliver Bibles. Johnny is also joined by his mysterious saviour, a teenage girl Reece who wants to become his apprentice. Disgusted at Reece’s worship of him, Johnny instead leaves her to hang. The various parties arrive at a saloon bar in the middle of nowhere. As they settle in for the night, they discover that the bar is inhabited by vampires presided over by the priestess Quixtla. The parties must set aside their differences in order to fight off the vampires.

All three From Dusk Till Dawn films retain the same basic idea – a group of outlaws on the run who end up at The Titty Twister and are forced to survive up against vampires. The Hangman’s Daughter‘s novelty is to take the story back and set it a century before the other two films as a Western. There is considerable ingenuity to this.

One particularly clever touch is the winding in of actual history, adding as a major character Ambrose Bierce, the real-life writer best known for his biting cynicism. Bierce wrote short story collections such as Tales of Soldiers and Civilians (1891) and The Devil’s Dictionary (1903) and a good number of horror stories, most famously the original deathdream fantasy An Occurrence at Owl Creek Bridge (1891) – see the film version An Occurrence at Owl Creek Bridge (1961). It is a touch that cleverly resolves Bierce’s mysteriously unexplained real-life disappearance South of the Border in 1914. [The subtitle of the film incidentally is borrowed from the title of one of Ambrose Bierce’s books The Monk and the Hangman’s Daughter (1892)].

There is an excellent opening scene with Marco Leonardi being saved from the gallows by someone shooting out the noose and he escaping while still tied, killing assailants with the knives hidden in the tips of his boots, and fleeing the mob while sweeping the hangman’s daughter (Ria Celi) up onto the back of a horse. It is a sequence that compares not unfavourably to Robert Rodriguez’s Western ballet Desperado (1995).

When it comes to the barroom brawl, the one staged here more than favourably compares to the same scene in From Dusk Till Dawn – in fact, with the absence of unconvincing morphing effects and the emphasis on much more believably physical action, one might be tempted to say that The Hangman’s Daughter conducts its barroom brawl much more modestly and effectively than From Dusk Till Dawn did.

The characters and their mutual crosscutting drama are superbly tied and the extended siege where the disparate characters are drawn together and forced to put aside their hostilities in the sake of mutual survival is well mounted. The end of the story cleverly ties back to become an origin story of one of the characters from From Dusk Till Dawn. Even the last shot is a 19th Century equivalent of the final shot of From Dusk Till Dawn with the temple stretching down the cliff. The only complaint that one might make is that lead Marco Leonardi fails to display the same anti-heroic charisma that George Clooney did in From Dusk Till Dawn. Michael Parks gives a wry and intelligent performance as the whiskey-soaked Ambrose Bierce.