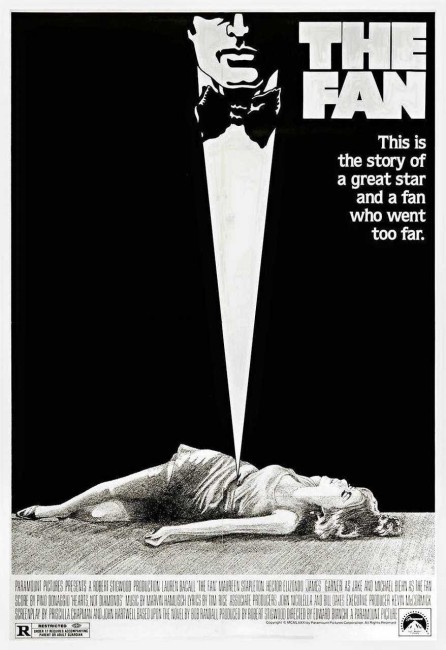 Record store clerk Douglas Breen obsessively writes fan letters to his favourite actress, the now middle-aged Sally Ross. When her secretary Belle Goldman writes back referring to him merely as one of Sally’s fan club, Douglas is deeply insulted. He believes that he and Sally are meant to be together as lovers. When Belle then tells him she will not write any more because of his indecent suggestions, Douglas sees Belle as interfering in his and Sally’s destined love. He follows Belle and brutally slashes her face on the subway. As Douglas starts to follow her everywhere, Sally begins to fear for her own life.

This is a so-so psycho-thriller. It was made by Robert Stigwood, a record producer who had had considerable success branching out as a film producer with hit musical films like Jesus Christ Superstar (1973), Tommy (1975), Saturday Night Fever (1977) and Grease (1978), as well as the bizarre experience that was Sgt. Pepper’s Lonely Hearts Club Band (1978). Stigwood had the bad taste to try and promote The Fan and its celebrity stalker theme in the wake of Mark Chapman’s shooting of John Lennon in 1980. The public and critical reception was negative and the film did mediocre business.

Any attempt to film Bob Randall’s stylish original 1978 novel, which was written in a wholly epistolatory style (that is, the entire story was relayed only through letters and memos) is something that seems necessarily doomed to inadequacy by the very nature of filming the book. The film at least makes occasional attempt to approximate this, having various letters read out. More aggravatingly however, it changes the book’s jolting twist ending for a more traditional and upbeat one.

56 year-old Lauren Bacall made a celebrated return to the screen with The Fan. (She had not appeared in a leading role for more than two decades). However, she is rather awful – she seems to be only barely resisting the desire to give an arch reading. The problem is that Lauren Bacall is an old school actress of the 1940s who was used to playing as a larger-than-life star. Film acting since became something quieter and more intimately observed. The role requires someone who can play it more restrained, seem convincingly afraid, rather than give it a grand old Bette Davis-type airing. Her exchanges with equally out-of-place James Garner are dreadful, with she having to deliver lines like: “I want to give too, not take, and now will you get the hell out of here.” The moments that she does soar are however in the excellent musical numbers, where she gives a wonderfully husky rendition during the Hearts Not Diamonds number.

Director Edward Bianchi is a sometimes stylish director with an eye for cold pictorial glitter. Best of all is Pino Donaggio’s stunning score, which comes over the credits wound in and around Michael Biehn’s narration of one of his letters with chopping staccato blocks of strings and a thunderous vibrato urgency.

Despite the similarity of titles and themes, this film is otherwise unrelated to The Fan (1996), which featured Robert De Niro as a celebrity sports stalker.