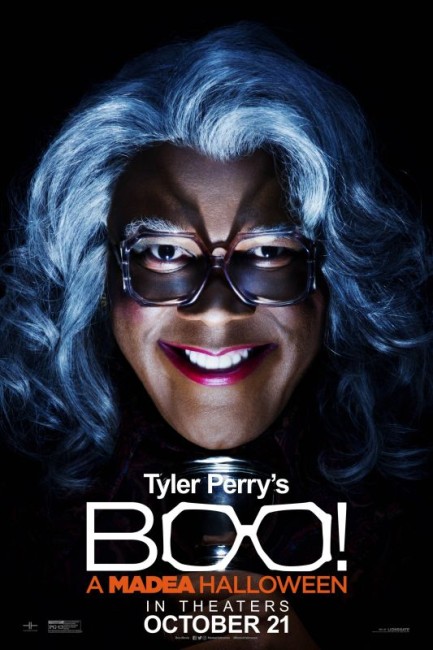 Brian Simmons becomes upset after finding that his seventeen year-old daughter Tiffany has been invited to a Halloween party at the Upsilon Theta fraternity. He has to go out so calls over his mother Mabel ‘Madea’ to make sure Tiffany does not leave the house. Madea arrives with her husband Joe and two best friends Bam and Hattie. Tiffany tries to make up a story about the house being haunted in order to get the others to go to bed early but when this fails to work she simply sneaks out. When she finds Tiffany is gone, Madea storms into the frat house in search of her. After they are thrown out of the party, Bam retaliates and calls the police. The fraternity swear vengeance. Back at Brian’s place, Madea and the girls then find themselves surrounded by killer clowns, spooky happenings and zombies.

Tyler Perry has become one of the top African-American stars/creative talents in the world. Perry first appeared with the self-written/produced/performed play I Know I’ve Been Changed (1998) that slowly became a hit and led to wider stage work. The role that Perry has become most associated with is Mabel ‘Madea’ Simmons, the foul-mouthed, gun-toting Black woman with attitude (a role Perry claimed to base on his own mother). Perry first premiered Madea in the play I Can Do Bad All By Myself (1999) and has developed several other Madea plays. These spilled over onto film beginning with Diary of a Mad Black Woman (2005). Boo! A Madea Halloween is the eighth out of so far eleven follow-ups, which have also included the animated film Madea’s Tough Love (2015). Perry’s star has grown through these and he has played in other comedy films as well as several serious films, including the title role in Alex Cross (2012) and parts in David Fincher’s Gone Girl (2014), Teenage Mutant Ninja Turtles: Out of the Shadows (2016), even a small part as an admiral in Star Trek (2009).

Tyler Perry makes films for Black audiences. He has attracted some criticism for playing to caricatures, most notably from Spike Lee who called Perry’s work ‘coonery buffoonery’. That’s not my culture or background so I am an outsider looking in. I don’t have a pressing onus of concern on either side of the debate as to whether someone should have a responsibility to uphold positive values about the Black community or should be allowed to just be an entertainer – whatever the case, Black audiences seem to respond to Perry’s films and he has amassed a current worth of $750 million.

I do get Spike Lee’s comments and I think they are valid up to a point. What should perhaps be placed in perspective is that one would also say that 90% of the roles in Hollywood comedies are caricatures or at least cutouts that extend little beyond characters being given a name and/or a job description. On the other hand, should every filmmakers and creator be lumbered with the responsibility of upholding the values of the tribe they belong to? I am a white Australasian – am I allowed to poke fun at say the racial intolerance of Australians or Kiwi bogans without having to also shoulder the burden of concern whether I am offering a positive or a negative image of that society?

I also have to say that I am not a particular fan of Tyler Perry’s humour. What I will say in Tyler Perry’s defence is that he and his troupe, by this film at least, come together as a very well-rehearsed ensemble. Many of the scenes with the seniors sitting around remind of the family scenes in Eddie Murphy’s The Nutty Professor (1996) and The Nutty Professor II: The Klumps (2000), which you get the feeling that Perry is trying to emulate, especially in casting himself as multiple roles within the same scene. Perry is nowhere near as accomplished a performer as Murphy was in his impersonations, nevertheless you do have to applaud the skill with which he, Cassi Davis and Patrice Lovely get into their various roles. I’d certainly far rather watch another Tyler Perry film than any of the excruciating efforts put out by Adam Sandler.

What upset me less so than the question of whether Perry trades in racial caricature is the strain of humour that runs through the film on the subject of child rearing where we get lots of jokes about how Perry (playing Madea’s son Brian) should deal with his daughter Diamond White by ‘whupping her ass’ and accompanying jokes about how Brian was hospitalised by Joe when the same was done to him. While this does get a certain laugh and Perry (as Brian) is careful to position himself on the side of being a parent who would never lay a hand on his child, you wonder if people would still regard this as funny if Madea and co were giving him romantic advice about whether he should deal with his wife by beating her? It feels that making a joke out of child abuse is heading into an extremely dodgy area and I am not entirely sure if it is one that Perry sufficiently acknowledges is a serious issue as much as he is blinded by the comedy value of such talk.

Largely, what I am concerned with here is the extent to which Perry makes Boo! A Madea Halloween as a horror film. I found myself heavily disappointed. Overall, the level of comedy is far more sophisticated than some of the other genre comedies to have emerged from Black Comedy – Scary Movie (2000) and sequels, A Haunted House (2013) and sequel, 30 Nights of Paranormal Activity with the Devil Inside the Girl with the Dragon Tattoo (2013), which all make a beeline for crude and vulgar common denominator humour.

On the other hand, these others are films that you could at least say have an affection for the material they are ribbing, whereas the accusation you could make of Tyler Perry is that he seems entirely disinterested in the horror content. It is not until the one-hour point, for instance, that there is anything in Boo! A Madea Halloween that could be considered horror. Thereafter, Perry throws in a series of half-hearted scenes with a sinister clown, words appearing on a bathroom mirror, the group being pursued by a horde of zombies. Throughout these scenes, it is clear that he lacks much interest in directing them. Moreover, the film reaches a ludicrous end explanation that blames everything that happened on a revenge scheme by the fraternity – although how a group can manage to hack a house (a process that occurs through phone lines) to cause words to appear on a bathroom mirror and lights to go on and off is beyond me.

The end the film reaches grated with me as false. The entire film seems set up in terms of emotional thrust for Tyler Perry’s Brian to man up and get the balls to deliver an ultimatum to daughter Diamond White wherein the others prepare to pack up her things and toss her out on the street, terrifying her into agreeing to abide by parental rules. This is followed by an elaborate sting where Madea (who has been portrayed as a bad-tempered petty criminal elsewhere) manages to reign in the respect of her entire community and convince them to put on a scam to make the frat boys think they have been busted on a murder charge. This all serves so that Brian can deliver a faux moral lecture to Diamond White about the need to respect parental authority (which is contradictorily delivered in exactly the same scene as Madea is seen fleeing to avoid arrest on a warrant).