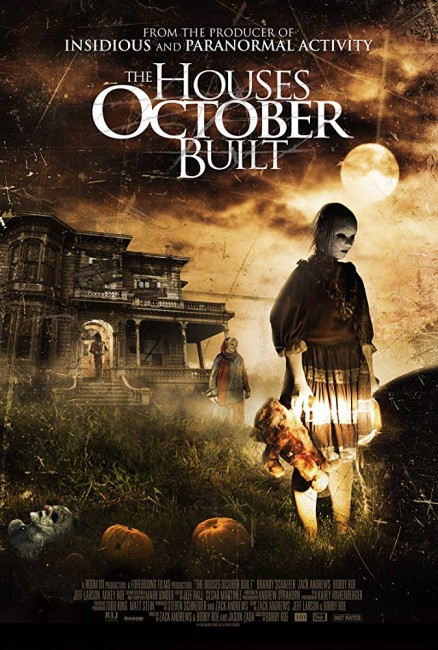 A group of five friends set out across Texas in a rented RV to visit various Halloween haunts in the five days leading up to Halloween. They film everything along the way. They are in search of extreme haunts and try to dig behind the staged performances at each attraction to find evidence of stories of convicted criminals working the haunts, of people dying during the performance or real human body parts being used. In their determination to find the most extreme haunt, they hear rumours of one called The Blue Skeleton held in a secret location in Louisiana. However, their investigation starts to uncover something and they find themselves followed by threatening costumed figures.

The Houses October Built was a debut for Texas-based filmmaker Bobby Roe. Roe and friends raised money and shot the film themselves. Confusingly, the IMDB insists that Roe made another version also entitled The Houses October Built in 2011 with the same cast and that it is a documentary – whether this is the same film mistakenly listed twice, a listing for a test screening of the film or that they actually did shoot the film twice is unclear as I have been unable to obtain any other information on the 2011 film.

The resulting film sits halfway between being a documentary and drama. This pushes The Houses October Built into the Found Footage arena. That said, as a Found Footage film, it has a looseness that feels like the actors are unrehearsed and not playing their parts according to a script. Their scenes feel more like the banter of a group setting out to make an amateur documentary, while some of the vox pop interviews and ventures through the haunts are clearly the real article, not staged film. On the other hand, when the film does try to add narrative material – the encounter with a spooky guy at a campsite, the performers from the haunts crowding around the RV – the fact that Roe is trying to dramatically stage things becomes obvious.

The investigation is none too different from the sort that occurs in Found Footage films all the time. The difference is that there it is staged as part of the plot, while here you get the impression that the film is making much of it up as it goes along. The thesis that the group set out to investigate seems to involve them searching for evidence of almost anything that suggests a twisted tabloid headline or urban legend associated with a Halloween haunt – of paedophiles being employed, that deaths/suicides occurred during the performance and nobody noticed, the real body parts have been used. You cannot help but think that if a real documentary crew set out in search of such stories, it would end up being an exercise in journalistic futility.

Later in the show, we get the introduction of the Blue Skeleton extreme haunt and the film starts to pick up a plot. It is also where The Houses October Built crosses over into far more standard Found Footage territory. There is a certain sinisterness to the scenes of the group being followed by menacing clown figures, strange girls with porcelain doll masks and a figure in a bloodied bunny costume. The film develops the same problem that other films set around Halloween haunted houses such as The Bates Haunting (2012) and 6 Degrees of Hell (2012) had – and that is that it has a difficulty differentiating between the theatrical effects that take place in the Halloween haunted houses and creating its own shock and suspense up on screen.

The premise also suffers from a vagueness – it keeps hinting there is something darker beneath the Halloween shows but it never says what it is and who the people shadowing the group are. Nevertheless, the film does finally kick in during the scenes when the group reach the Blue Skeleton location and are placed under hoods by sinister masked figures and in the final image of Brandy Schaefer buried alive with a camera in her coffin as soil is packed around her.

Bobby Roe and the same cast returned with a sequel The Houses October Built 2 (2017).