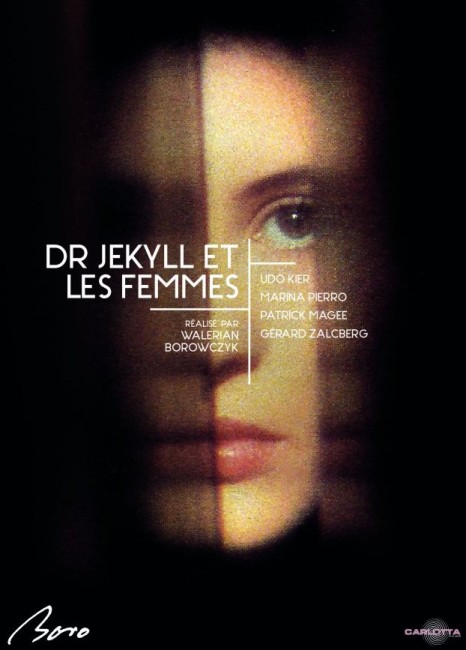 Dr Henry Jekyll holds a dinner party to announce his engagement to Fanny Osbourne. Dr Jekyll has been spending much time involved in medical research and has published a book voicing his views on transcendental medicine. As the guests dine and settle in for the night, a fiend appears to have entered the house and is ravaging the women and men, killing others. Fanny sneaks into Jekyll’s laboratory to observe him bathing in a bath of chemicals. These cause him to transform into an entirely different person. This person he calls Edward Hyde and is the bestial side of human nature that the chemicals have allowed to emerge and run free without restraint.

Walerian Borowczyk (1923-2006) was a cult director. The Polish-born Borowczyk started out as a painter, settling in France in the 1950s where he began to branch out making a series of stop-motion animated short films. It is however with his works of lush, dreamy artistic erotica that Borowczyk gained a name and appreciative audience. These include films like Goto, Island of Love (1968), Immoral Tales (1974), The Beast (1975), A Story of Sin (1975) and Behind Convent Walls (1977). Dr Jekyll and His Women (known under a variety of different names in English-language) was one of Borowczyk’s last films. He would go onto make three other works after this before his death in 2006, including Emmanuelle V (1987), which he disowned. The other two films, The Art of Love (1983) and Love Rites/Queen of the Night (1987) are less well considered and Dr Jekyll and His Women should be regarded as the last film where Borowczyk still had his old magic.

Borowczyk certainly takes his Robert Louis Stevenson with liberal regard and offers up one of the most variant tellings of the story. Perhaps the biggest change is that Dr Jekyll and Mr Hyde are played by two different actors. This is a new idea in cinema unless one wants to count the role being split between a man and a woman in Dr Jekyll and Sister Hyde (1971). (Actors usually like to get their teeth into the part because the delineation of the two roles offers a considerable acting challenge). In this case, the role of Dr Jekyll is played by an impossibly youthful and handsome Udo Kier (back in the heyday of the far-out Euro roles that gave him his cult name), while the role of Mr Hyde has been inherited by the unknown Dutch actor Gerald Zalcberg who has clearly been chosen because of his serial killer features.

Borowzyk’s other innovations include having Dr Jekyll enter a bath rather than drink a potion, which at least treats the transformation in a different way – although I am not sure if it is anything that necessarily adds or subtracts from any of the classic versions. The entirety of the Stevenson story has been stripped and condensed to take place in a single evening around the setting of a dinner party held by Dr Jekyll. Multiple transformations occur throughout the evening and the plot is akin to an Agatha Christie murder mystery where the guests are trying to deal with a mystery figure popping up to kill them. The other major change is the ending where Jekyll’s fiancee Fanny Osbourne (a new character named after the married woman who became the love of Robert Louis Stevenson’s life and he later married) who gets in the bath and transforms too. This gives a new quasi-feminist spin to the film, in essence giving equal time to the woman and her dark side. This leads to an openly anarchist ending where Borowczyk has them defying the cloying social conditions of Victorian England, burning his house to the ground (amid pointed shots of their engagement notice going up in flame) as they depart in a hansom cab while having sex.

As always, one of the virtues of a Walerian Borowczyk film is the lushness of the production design and set dressings. He incarnates Victorian England in the way that no other adapter of Dr Jekyll has ever done – not an old house filled with cliched deep wood and high ceilinged dining halls and studies but a cramped world of linoleum and glass porticoed doors, a look that is less a production designer showing off than a world that seems slightly shabby and lived in. Borowczyk loves antique bric-a-brac. He takes great delight in focusing in closeup on the old-fashioned toiletries, the equipment in the laboratory, the archaic print of Jekyll’s pamphlet, the guests signing the register as they arrive. He even delights in shots of General Carew’s daughter caressing the quasi-phallic shape of a gramophone horn, before being bent over it to be ravaged by Hyde.

The main problem with the film is that one is watching an incomplete version of it. The only version of it that I was able to download is an obscure English-language dub that comes with Dutch subtitles. The film was cut of some purported 26 minutes for British release. This version is more complete than that, although still reigns in 87 minutes and would appear to be missing at least five minutes of the original 92-minute running time. It is not certain what is missing from this, although one scene that does not appear is Mr Hyde’s sexual assault of the male guest. An encounter between Udo Kier and Marina Pierro towards the start of the film also appears to abruptly end just as he starts undressing her. This should be taken into account before calling Dr Jekyll and His Women somewhat tame in regards to the eroticism one expects of Borowczyk. (The Dutch subbed version is also taken from a video copy, which comes with a number of audio glitches and film pauses – still, this is the only available version of the film and will have to do for now).

Certainly, as the work of erotica one has come to expect of Walerian Borowczyk’s films, Dr Jekyll and His Women ranks as one of his tamer. The first half-hour of the film is very talky, centred around the dinner party with the lurking figure of Hyde in the background. There is the ravaging of the dancing girl but this remains chaste and only happens off-screen. Borowczyk does eventually kick into his old tricks in an outrageous scene where Patrick Magee’s General is tied up in a chair and forced to watch as Hyde ravages his daughter with a giant silhouetted erection while she is bent over a gramophone (which she seems to welcome). There is the clear suggestion that Hyde swings both ways with him reported as having ravaged male guests as well. However, up until the end scene with Hyde and Marina Pierro copulating in the cab, that remains it. Did the film not come from the pedigree of Walerian Borowczyk, it would be a hard stretch to classify it as a work of erotica, rather than merely a Euro horror film made by someone like Jesus Franco (albeit with a better budget).