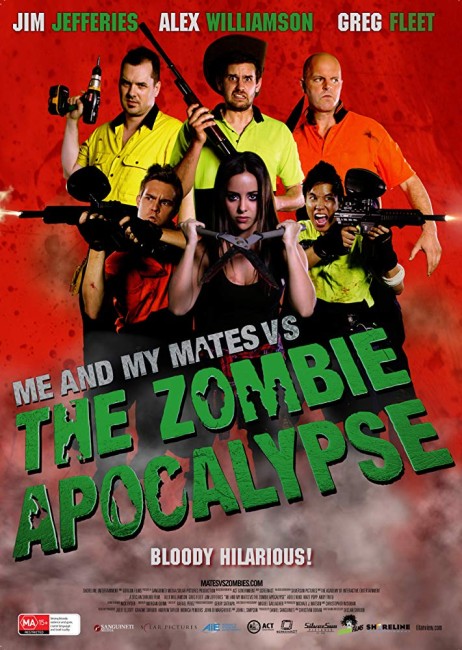 The zombie apocalypse has occurred. Darryl responds to a call and joins his co-workers Roy and Joel at the telephone exchange where they work and barricade themselves in from the zombies outside. Joined also by Roy’s daughter Emma, her boyfriend Lachlan and his friend Ryan, they try to wait it out until help from the military comes. Problems occur with the lack of supplies and beer, the lack of weapons, in Darryl’s ongoing efforts to have Roy consider him for the company cricket team and the fact that Darryl just had sex with Emma who thought Lachlan was dead.

The gonzo zombie film has become legion during the late 2000s/2010s wherein zombies are mixed with the most ridiculous and incongruous things. See titles such as Zombie Beach Party (2003), Poultrygeist: Night of the Chicken Dead (2006), Zombie Cheerleader Camp (2007), Zombie Strippers! (2008), Attack of the Vegan Zombies! (2009), Santa Claus vs. the Zombies (2010), Bong of the Dead (2011), Cockneys vs Zombies (2012) and Pride and Prejudice and Zombies (2016), among others. The reasons for this would simply seem to be the desire to infuse something different into a genre that has been demonstrating for some time that it only had a limited number of original plot moves. (For a more detailed overview of the genre see Zombie Films).

Australia, a great cauldron of B movies in the past, has been relatively slow to jump on board the zombie fad. The country did produce one effort back during the original fad with Zombie Brigade (1988) but it would be another fifteen years before the Spierig Brothers made the very strange Undead (2003). The modern era has brought sporadic efforts such as Dead Country (2008) and sequel Deader Country (2009), I Am Bish (2009), Theatre of the Dead (2013), The Dustwalker (2019) and most successfully Wyrmwood: Road of the Dead (2014). Wyrmwood aimed at the same territory but was generally a serious zombie movie, whereas Me and My Mates vs. the Zombie Apocalypse is the first Australian effort in the gonzo zombie genre.

The essential set-up of the film is to take a comically cliched bunch of ‘cobbers’ (or one’s mates ie. drinking buddies) and set their none-too-bright, cheerfully Neanderthal, crude, sexist, beer-drinking and sports-loving ways up against the zombie apocalypse. This is fairly much the whole conception of Me and My Mates vs. the Zombie Apocalypse.

It is only a few scenes in before you are cringing at the high level of sheer bad taste and offensiveness that the film is willing to venture into as Alex Williamson and Jim Jeffries stand about debating whether to shoot Greg Fleet’s zombified wife and joking about “fucking girls in all three holes”. Elsewhere we readily get jokes about homos or racial slurs slung in the direction of Asian Andy Trieu, while Alex Williamson is wont to opine insights such as “Some of them [the zombie women] are still very fuckable. I find the virus takes them from a 10/10 to a 7/10.”

If this kind of humour, even offered up in a deadpan way, is one’s idea of hilarity then by all means regard Me and My Mates vs. the Zombie Apocalypse as downright hilarious. A far more successful Australian venture into the zombie comedy was the subsequent Little Monsters (2019).