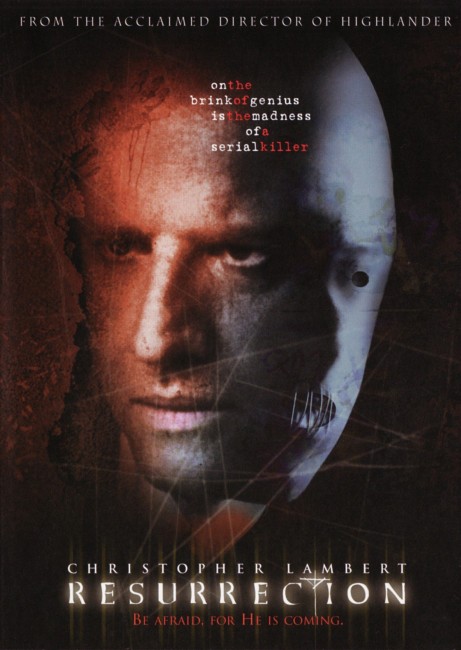 John Prudhomme, a Cajun detective with the Chicago Police Force, is investigating a series of murders where in each case the killer takes one of the victim’s limbs. Prudhomme makes the realisation that each victim has the name of one of Christ’s apostles. They discover that the killer is building a body in the belief that he can resurrect Christ at Easter.

Resurrection is a Serial Killer Thriller. It is directed by Russell Mulcahy, the former MTV director who has made a number of genre films including Highlander (1986) and The Shadow (1994). (See below for Russell Mulcahy’s other genre films). With Resurrection, Mulcahy has teamed up with star Christopher Lambert for the third time – the two having previously worked together on Highlander and Highlander II: The Quickening (1991). Christopher Lambert also takes a producing and co-story credit on the film.

Resurrection has clearly been made in the shadow of Se7en (1995). Like Se7en, it features a serial killer with a Biblical motif who is trying to complete a puzzle, as well as an extended sequence where the killer allows himself be captured by the police. Despite a strong debt to Se7en, Resurrection is original in its own ways and rather interesting. It has a reasonable and absorbing script – the unveiling of the Biblical pattern of the killings is intriguing and there is an effective surprise revelation of the killer’s identity. There are some notably graphic makeup effects, especially the piecemeal Christ body that we see at the end.

Christopher Lambert gives his usual performance, which has little to do with actual acting and everything to do with being able to affect a boyish twinkle. There is a good performance from Robert Joy, while genre director David Cronenberg turns up as Christopher Lambert’s family priest (the film was shot in Cronenberg’s hometown of Toronto). The film as a whole is a reasonable minor entry in the genre.

Russell Mulcahy’s other genre films are:- the excellent killer boar film Razorback (1984), Highlander (1986), which launched a long-running franchise, its sequel the awful Highlander II: The Quickening (1991), the revenge drama Ricochet (1991), the mystical radio superhero adaptation The Shadow (1994), the revived mummy film Talos the Mummy/Tale of the Mummy (1998), the tv mini-series remake of On the Beach (2000), the tv mini-series of Jules Verne’s Mysterious Island (2005), the tv mini-series The Curse of King Tut’s Tomb (2006), Resident Evil: Extinction (2007) and The Scorpion King: Rise of a Warrior (2008). Mulcahy also wrote/produced the killer shark film Bait (2012).