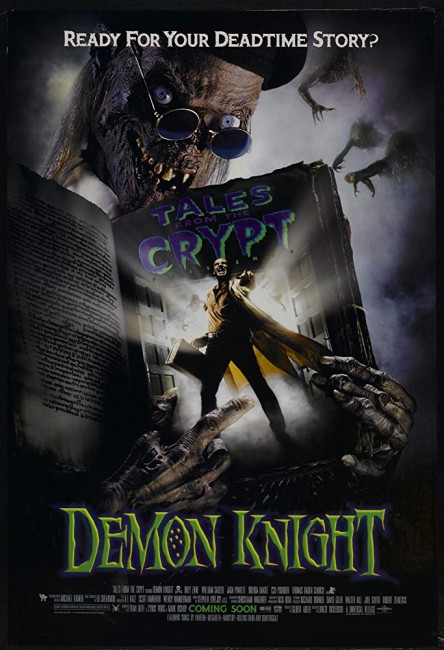 The Crypt Keeper previews his new film ‘Demon Knight’. In the film, Frank Brayker seeks refuge in a fleabag hotel in Wormwood, New Mexico. Soon a bald-headed man known as The Collector comes in pursuit. The Collector controls demonic forces that surround the hotel and try to posses the other tenants to get in. The others discover that Brayker has in his possession a container that contains the blood of Jesus Christ and that this is the only means of stopping The Collector.

Originally, Tales from the Crypt (1950-5) was one of the horror comic titles developed by William C. Gaines, publisher of the infamous E.C. Comics. Gaines published a number of such titles – The Vault of Horror (1950-5), The Haunt of Fear (1950-4) and Weird Science (1951-5) but Tales from the Crypt was the most famous of these. Each issue of Tales from the Crypt would feature several stories that would climax with the selfish receiving their just desserts and would feature a ghoulish narrator who would frame the story with outrageous puns. Gaines and E.C.’s controversy was immortalised by psychologist Frederic Wertham who published a book The Seduction of the Innocent (1953) and led an attack before a Senate Subcommittee, charging that the violence in comics was subverting the nation’s youth, where E.C.’s horror titles were held as the prime exhibit. The Comics Code Authority was instituted and thereafter many distributors refused to carry the E.C. line and Gaines was essentially forced out of business – Gaines of course bounced back in 1954 with a new title Mad Magazine. However, the E.C. horror comics are what William Gaines’s name will forever be associated with.

Tales from the Crypt Presents Demon Knight is directed by Spike Lee’s former cinematographer Ernest Dickerson, who made his debut the year before with the human-hunting film Surviving the Game (1994). The story is standard Tales from the Crypt fare – it just has a bigger budget and some more extreme splatter effects. It is standard fare as the contemporary (1990s) horror film goes – the tone is campy and there is a tongue-in-cheek villain who fires off one-liners. The splatter effects are competent – fists through the head, arms ripped off, demons with exploding heads, a cool looking twelve-foot-tall demon at the climax. As this type of film goes, Demon Knight is competently done. It doesn’t insult the intelligence as badly as most of the moron-level films in this genre do; on the other hand, it does not particularly distinguish itself either.

The script is weak. Nothing is done with the intriguing concept of Christ’s blood – what is the point of the blood? Does The Collector spend all his time pursuing it because it can destroy him? If this is the case then how come, as the twist ending reveals, the blood does not destroy The Collector after all?

William Sadler gives a not-too-bad performance of burned-out intensity. Jada Pinkett, later to become Mrs Will Smith, came to promising attention here, and is quite good. Only Billy Zane, from whom one expected good things in this part, disappoints in an intrusively campy playing.

Ernest Dickerson went onto direct the tv movie Futuresport (1998) and the interesting Blaxploitation/horror homage Bones (2001). Dickerson mostly works as a director in tv these days.