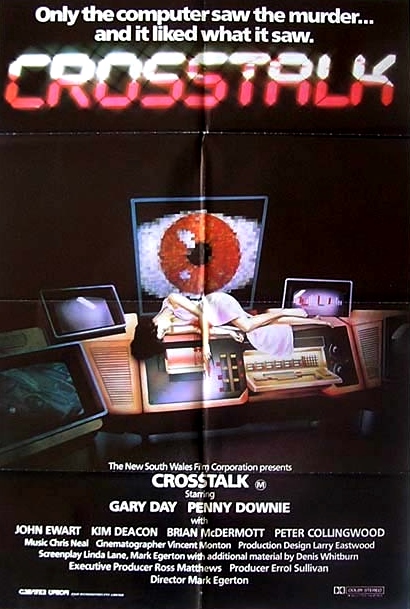 Computer designer Ed Ballinger has been left temporarily wheelchair-ridden following a car crash. His boss sets him up in his apartment so he can continue working on the new designs for the I-500 computer. However, while Ballinger sleeps, the I-500 develops a fascination with wealthy businessman David Stollier in the apartment opposite and keeps playing back to Ballinger the recorded sounds of Stollier’s garbage disposal. Ballinger realises the I-500 is trying to tell him that Stollier has murdered his wife and put her body down the garbage disposal. And so with the help of his nurse, Ballinger plans to break into Stollier’s apartment to obtain evidence.

This Australian hi-tech thriller impresses only with its thorough routineness. The basic premise is a steal from Alfred Hitchcock’s Rear Window (1954) – the man housebound with an injury suspecting that his neighbour has conducted a murder. Worse the computer’s development of artificial intelligence is something of no importance to the story – designer Gary Day seems completely unsurprised, just seems to accept as a matter of course what is perhaps the most important and far-reaching technological breakthrough to face society at the present – the idea of a computer spontaneously gaining intelligence. The AI is only a plot device and then one, along with its implications, that is completely forgotten about. The technology looks clumsy and dated even a decade later.

Mark Egerton’s direction is routine, his visual style dull. Some of the suspense contains the seeds of classic nailbiting tension – particularly the scenes involving Kim Deacon’s venture into John Ewart’s apartment where a van parks in front of the tv monitor preventing Gary Day from seeing Ewart’s car returning; Day trying to crawl to a phone to warn her after his wheelchair tips over; her hiding in the washroom where a dead body is suddenly seen packed into the washing-machine behind her when the light is turned on – but all of this is routinely presented and in need of a far more capable director to bring to life.