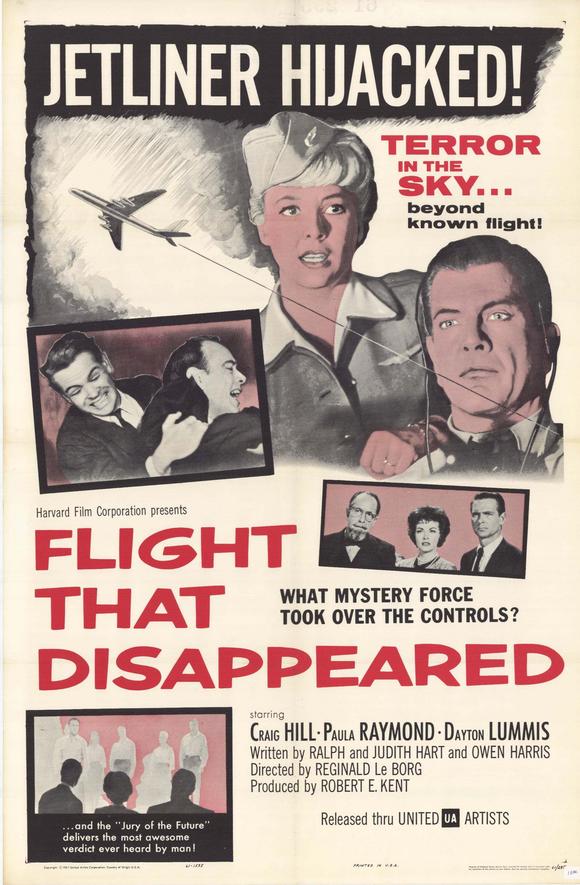 Flight 60 takes off from Los Angeles on a course to Washington D.C. The pilots find they are suddenly unable to stop the plane as it inexplicably starts climbing and keeps going until it is ten miles up. Eventually, the plane arrives in a realm in the clouds that is outside space and time. Three of the passengers remain conscious, including Dr Carl Morris, designer of the Beta Bomb, and ICBM designer Tom Endicott. They are then placed on trial by the unborn children of the future for the deaths and mass destruction that the Beta Bomb will cause.

The Flight That Disappeared is a relatively obscure oddity from the Cold War era. The film was directed by Reginald LeBorg, a prolific director of B movies (see below).

The Flight That Disappeared starts out as an interesting mystery concerning a plane’s abduction. Here the film feels like an effective variant on what would later become the disaster movie formula – indeed, the film’ documentary-like approach in these scenes is far more preferable to the melodrama of a film like The Towering Inferno (1974). Reginald LeBorg generates good atmosphere, aided by an eerie theremin score.

It is 50 minutes until we get to understand what is going on. It is then The Flight That Disappeared falters and disappointingly reveals itself as a heavy-handed morality play, one wherein scientists are put on trial by future generations for developing The Bomb. It becomes a variant on 1940s light fantasy films like A Guy Named Joe (1943) and A Matter of Life and Death/Stairway to Heaven (1946) updated to the Nuclear Age. In the 1940s, the plane would have been whisked up into the afterlife, but now it has been written as 1950s science-fiction cinema, asserting dire warnings about the threat of nuclear war a la The Day the Earth Stood Still (1951), or more closely the Golden Turkey classic The Story of Mankind (1957), which had the human race being tried in Heaven for the Bomb.

What we end up with is a message framed with the stentorious didacticism of a street preacher rather than any moral argument. Moreover, it is one that incorrectly lays the blame for nuclear war at the feet of scientists. While scientists engaged in the creation of weapons of mass destruction have an undeniable responsibility for the things they create, the film is notably lacking in including any military people or politicians amongst the passenger complement. After all, scientists only build the bombs, it is the military and leaderships who unleash them. It is small-minded territorial disputes, prejudices and paranoias that fuel wars, not scientific inquiry. Surely trying to indict a scientist for creating The Bomb is like trying to blame the inventor of the musket for all the gang shootings in The US.

Director Reginald LeBorg was an Austrian immigrant who worked as a B-budget director in Hollywood between the 1920s to the 1970s, mostly being known for a number of the entries in the Joe Palooka series. His other genre films include:- the Inner Sanctum thrillers Calling Dr Death (1944) and Dead Man’s Eyes (1944); the clairvoyance film Destiny (1944); Jungle Woman (1944), the second in Universal’s series starring Acquanetta as a were-ape woman; The Mummy’s Ghost (1944), the fourth of Universal’s Mummy series; Weird Woman (1944) about witchcraft in academic circles; the mad scientist film The Black Sleep (1956); Voodoo Island (1957); the possession film Diary of a Madman (1963); the psychic thriller The Eyes of Annie Jones (1964); and the psycho-thriller So Evil, My Sister (1974).