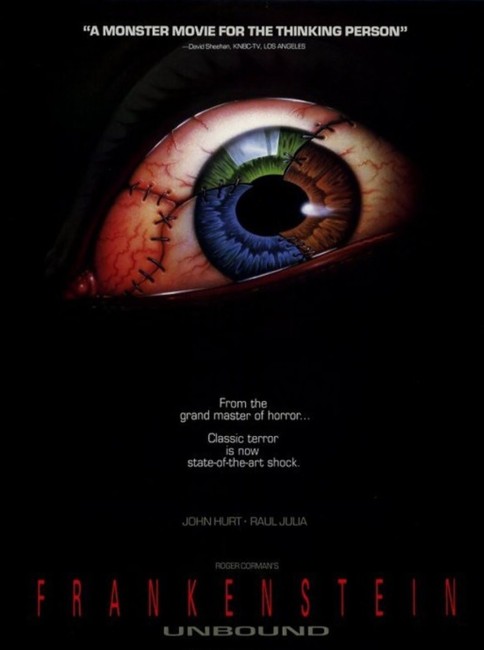 In Los Angeles of 2031, scientist Joe Buchanan has just developed a weapon that can destroy an object by molecularly imploding it. At the same, strange pink clouds have been appearing in the sky, causing objects to disappear. One of these appears over Buchanan’s house and swallows up him and his car. Buchanan finds himself on an unfamiliar lakeside and eventually discovers that he has been thrown back in time to Switzerland of 1816. He is startled to then encounter not only Mary Shelley but also a very real Baron Frankenstein who is being hounded by his monstrous creation.

Roger Corman is one of the legendary names in B movie-making. Corman’s career has passed through a number of distinctive phases, from the entertainingly cheap monster/sf movies he made during the 1950s to the sombre Edgar Allan Poe films of the 1960s, which brought him critical acclaim. From the 1970s onwards, Corman quit active directing and became a producer, forming first New World Studios and then later the Concorde and New Horizons production companies. There he has produced an extraordinary body of low-budget films – over 400 titles, which must be some kind of record.

Unexpectedly, at the age of 64 Corman suddenly announced he would be returning to the director’s chair with Frankenstein Unbound, something he had not occupied for nearly twenty years since Von Richtofen and Brown (1971). He had announced for a good part of the 1980s that he was planning another version of Frankenstein, but eventually he turned to making this adaptation of science-fiction writer Brian Aldiss’s acclaimed novel Frankenstein Unbound (1973).

From someone who invested the Poe films – see The House of Usher (1960) – with brooding, moody atmosphere, you would think that the Frankenstein story would be full of possibilities for Roger Corman. However, Frankenstein Unbound shows that Corman has if anything regressed in his twenty years absence from the director’s chair. Even though he is operating on a reasonable budget, the film looks like a B movie. The sets and period costumes are laughably tatty and the end face-off with the monster in a feeble display of twirling laser lights looks cheap and ridiculous.

Brian Aldiss wrote his novel as a sharp interrogation/deconstruction of the Frankenstein story but Roger Corman merely mounts it as a pulp B-movie. There is no sense of any of the literate metaphors contained in the stories that both Mary Shelley and Brian Aldiss wrote – the script hammers the responsibility for science theme home with a complete lack of subtlety. The ending hints at some transcendental metaphor about the monster having been turned into a more powerful spirit form and the end of the human race, but we are not given the slightest clue about what this means.

There were several other films that came out around the same time – Gothic (1986), Haunted Summer (1988) and the Spanish production Rowing with the Wind (1988) – that were fascinated with the Summer 1816 meeting at the Villa Diodati between Percy and Mary Shelley and Lord Byron, which inspired Mary to write Frankenstein (1818). The events also play out in the biopic Mary Shelley (2017), while the tv series The Frankenstein Chronicles (2015-7) wound Mary Shelley in as a character and featured a police investigation into somebody conducting a series of Frankenstein-like experiments and there was even the Doctor Who episode The Haunting of Villa Diodati (2020) where the apparition that Mary sees turns out to be a Cyberman.

However, the Villa Diodati sequences that Corman mounts here are awful. Jason Patric makes an occasionally dark and magnetic Byron, but INXS lead singer Michael Hutchence is horrendously miscast as Shelley and the posturing poets sequence is entirely risible. As Mary, Bridget Fonda fails to quash an American accent, resulting in some bizarre contortions. Even John Hurt gives an atypically bad, smugly happy performance. On the plus side, Raul Julia gives a burly and effective essayal of the part of Frankenstein. As the monster, Nick Brimble’s playfully curious facial mimes are sometimes effective. However, half the time the creature is played as a blundering comic foil, not a lot different from Chewbacca in Star Wars (1977), and the rest of the time as a brutal killer.

Other Brian Aldiss works adapted to the screen have been the Steven Spielberg film A.I. (Artificial Intelligence) (2001) and the non-genre Brothers of the Head (2005) about Siamese twins.