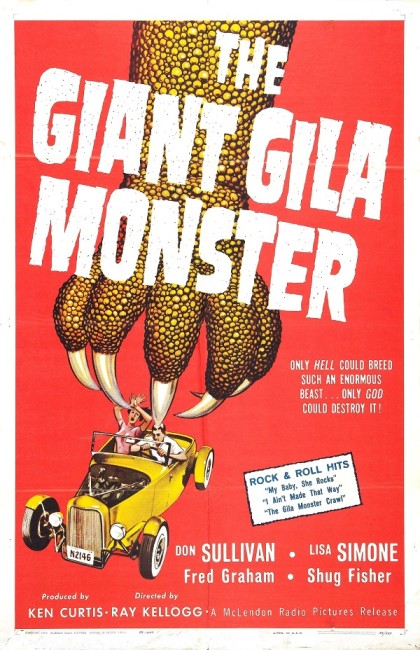 Youthful hot rodder and mechanic Chase Winstead is drawn in to help the sheriff solve the mystery surrounding two of his friends who have disappeared. Around the town, vehicles are found pushed off the road and with the people inside missing. Eventually, they discover that they are dealing with a gila monster that has grown to giant size.

The Giant Gila Monster was a very minor 1950s giant monster film. The film was shot in Texas by director Ray Kellogg and producer Ken Curtis and released on a double-bill with their one other giant monster film The Killer Shrews (1959). Ray Kellogg was a former US Army cameraman who had shot footage of the Nuremberg Trials. Subsequent to the War, Kellogg began to specialize in photographic effects and worked on a number of high-profile Hollywood films. Kellogg also worked as a second-unit director on films like Cleopatra (1963), Batman (1966), Stagecoach (1966) and Tora! Tora! Tora! (1970). As director, Ray Kellogg made only two other films – the boy and his dog film My Dog, Buddy (1960) and the classically bad John Wayne Vietnam War film The Green Berets (1968).

The Giant Gila Monster is a dreary example of the 1950s giant monster movie. Everything follows in the footsteps of what was established in The Beast from 20,000 Fathoms (1953). It is poorly photographed, while Ray Kellogg’s direction is dull and static. More to the point, the special effects are pitiful in comparison to the ones in almost any other film of the era. Unlike the stop-motion animation in The Beast from 20,000 Fathoms, The Giant Gila Monster uses the cheap cop-out of photographically enlarged lizards. These effects look exactly what they are, thanks to some shoddy and unconvincing miniature photography. The scenes with the gila monster attacking a truck and especially the models during the train crash sequence look so pitiful as to be downright laughable. Unlike The Beast from 20,000 Fathoms and most of its ilk, there is no explanation of atomic radiation causing the gila monster to become giant.

Another big minus point is that the pace of the film is as slow as molasses. People spend much of the running time standing around talking and puzzling over the situation. At contrast to this, the cuts away to the rampaging gila monster tell us all we need to know a substantial amount of time before the characters wake up to what is going on. On the plus side, Don Sullivan gives an assured performance as the lead teen. Fred Graham is solid support as the sheriff and there is a likeably amusing performance from Shug Fisher as the drunken Old Man Harris.

Like several other genre films around this era, The Giant Gila Monster jumps aboard the teenage monster fad. The teenage monster fad began with I Was a Teenage Werewolf (1957) and passed through a number of other memorable titles such as I Was a Teenage Frankenstein (1957), Invasion of the Saucer Men (1957), The Blob (1958), Teenagers from Outer Space (1959), Teenage Zombies (1960) and others. Typical of the 1950s teen monster movie, the teenagers run around in hot rods, dance to rock’n’roll, while there are extended dancehall sequences, even numbers where lead actor Don Sullivan gets to perform several songs. Unlike most of these teen monster films, which portray the relationship between teens and adults as a lack of understanding if not outright hostility, or with the teens only seeking to earn the respect of the grown-ups, the relationship between teenager Don Sullivan and the authority figure of the sheriff is a friendly one.

The film ends with Don Sullivan’s teen destroying the monster single-handedly. There is a bizarrely patronizing ending where as reward for having done so, he is told that the railroad will be happy to buy him a new hot rod to replace the one that was wrecked, while the wealthy father whose son became a victim of the gila monster tells Sullivan that he will happily give him a new job now that his employer is dead.