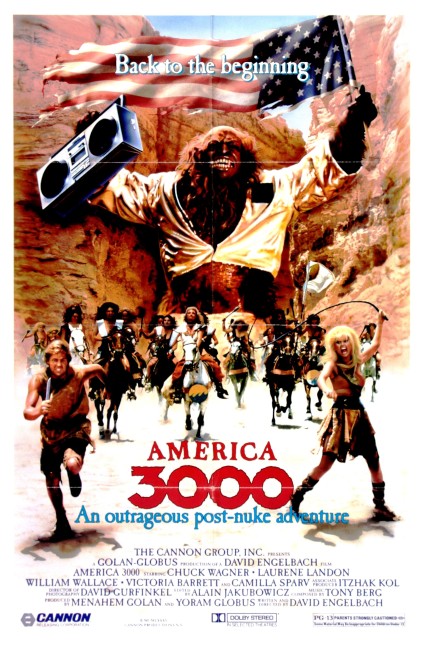 It is 900 years after the Great Nuke and civilisation is in a state of barbarism. There are small communities (Komes) of frals (women) who keep plugots (men) subservient either as seeders (breeders) or machos (slaves). Korvis leads a group of men in an escape from the Frisco Kome. They set up their own community Camp Reagan, frequently venturing forth to raid the women’s Kome. Fleeing after one sortie, Korvis discovers an ancient nuclear missile silo. He returns with a ghetto blaster, weapons and wearing a contamination suit and is thought so fearsome that he is declared the mythic President who it is believed will one day return to reunite humanity. He and the Camp Reagan men begin a ruse to fool the frals into believing that he is The President. Korvis discovers a mutual desire for the Fral Tiara (leader) Vena. At the same time, visiting frals from other Komes are conspiring to overthrow Vena and establish her more warlike sister as Tiara so as to eliminate Camp Regan.

During the 1980s, Israeli-born, American-based producers Menahem Golan and Yoram Globus made a good many films, which were released under their Cannon Films istribution label. Most notably, they gave an entire career to Chuck Norris during this time in the likes of Missing in Action (1984), Invasion U.S.A. (1985), The Delta Force (1986), Firewalker (1986) and Hero and the Terror (1988). They also made a number of bad sword-and-sorcery films – the Italian-made Hercules (1983), Sword of the Valiant: The Legend of Sir Gawain and the Green Knight (1983), The Seven Magnificent Gladiators (1985), The Barbarians (1987), Gor (1987) and Masters of the Universe (1987); various Charles Bronson vehicles; several Tobe Hooper productions – Lifeforce (1985), Invaders from Mars (1986) and The Texas Chainsaw Massacre 2 (1986); a series of cheaply fairytale adaptations; and one or two others such as the excellent Runaway Train (1985) and the ghastly King Solomon’s Mines (1985).

America 3000 was a bizarre oddity that emerged during this time. Golan-Globus shot the film on the cheap in their native Israel. The only recognisable name in the cast line-up was Laurene Landon who seemed almost in danger of becoming a B-budget heroine in the mid-80s.

America 3000 was one of a host of films that came out imitating the success of Mad Max 2 (1981), which created a fad for post-holocaust action movies – amid this genre, Golan-Globus also made the more conventional Cyborg (1989). As the Mad Max imitators became legion, some filmmakers started conducting more tongue-in-cheek versions with efforts like Cherry 2000 (1987), Hell Comes to Frogtown (1987), Warlords (1988) and A Nymphoid Barbarian in Dinosaur Hell (1990). America 3000 was certainly one of the strangest to emerge from this mini-fad.

America 3000 is an almost likeable film. If nothing else, it is one of the few films to attempt to realistically portray a future language and recognise the fact that what would emerge would be a decayed variation of the language we speak today. The whole film is spoken in a strange half-recognisable argot – “the world was woggos”, “everything was going hot plastic,” or people invoking the “Red Cross” as a prayer and the wait for the return of the near-messianic President.

In terms of ideas, the film falls somewhere between Gene Roddenberry’s tv pilot Planet Earth (1974), with its all-women society that keep men as subservient prisoners, and the Star Trek episode The Omega Glory (1968) wherein an alien society existed as a satirically exaggerated version of the present, enacting decayed, half-understood versions of the Cold War.

As such, it all proves vaguely amusing, if an exercise that leaves one scratching their head at the end of it. Certainly, as a concept, it is probably not enough to stretch to a full film. Instead, what one ends up watching are the at least energetically directed fight sequences. The sheer strangeness was far too bizarre for most audiences who ignored America 3000. The film was seen cinematically in only a few places and then released directly to video.

America 3000 is discussed in the Golan-Globus documentary Electric Boogaloo: The Wild, Untold Story of Cannon Films (2014), which holds the amusing scene of Laurene Landon burning her dvd copy of the film in protest against Golan and Globus’s employment practices.