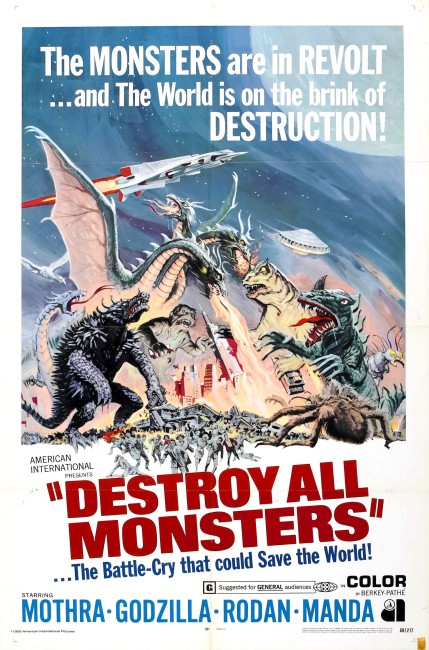 In 1999, all giant monsters have been penned in a special area on Ogasawara Island called Monsterland. Suddenly, Godzilla, Anguiras, Rodan, Mothra, Barugon, Varan, Manda, Spiga and later Ghidrah turn on humanity and start destroying cities all around the world. The crew of the moon rocket SY3 are diverted to deal with the menace and discover that they are dealing with an alien race The Kilaaks who are using the monsters to subjugate humanity and make Earth ready for invasion.

Destroy All Monsters was the 20th monster move from Toho, their ninth featuring Godzilla. To celebrate the occasion, Toho brought back just about every monster they had created before, including Mothra, Rodan, Varan, Ghidrah, Baragon from Frankenstein Conquers the World (1966), Manda from Atragon (1963), Anguiras from Gigantis the Fire Monster (1955), Gorasaurus who Kong battled in King Kong Escapes (1967) and Kumonga the spider from Son of Godzilla (1968).

Destroy All Monsters came out at a time when Toho, as well as their competitor in the monster movie market Toei, had exhausted most of the possibilities of straight monster bashes. Like Universal Studios before them in the 1940s with Frankenstein, Dracula and the Wolf Man, they then ventured into pitting their in-house monsters against one another. Beginning with Ghidrah the Three-Headed Monster (1964), which featured alien invaders wielding monsters against Japan, they attempted to combine monster movies with the popular space opera genre they had also created. The combination of monster movie and space opera became popular throughout a number of Japanese monster movies of the 1960s and 70s and is used here.

In fact, the space opera aspect is allowed to take over a substantial part the film, leaving Destroy All Monsters feeling like more of a space opera than it is ever a monster movie. The exploits of the Moon rocket expedition and the aliens taking people over gets far more time than the monsters do, for instance. The monster scenes are brief and there is little in the way of mass destruction set-pieces that make these films so much fun. Nor is their any clear good guy monster defender.

The plot is simplistic and considerably wrecked by bad dubbing. The show does rise to the occasion at the climax where it finally engages in one of the wonderfully colourful and silly tag team wrestling matches that makes these films so much fun, with the other monsters all beating up on Ghidrah. Certainly, in terms of the landmark film it was intended as though, Destroy All Monsters is underwhelming.