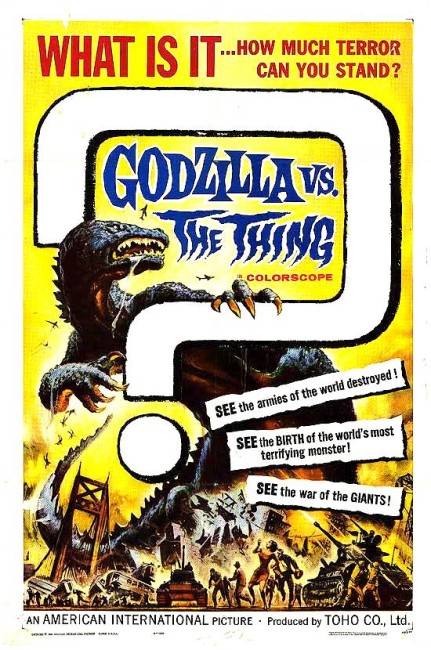 A giant egg is washed up on the Japanese shoreline in the aftermath of a hurricane. A greedy businessman quickly declares ownership and plans to exploit the egg as a tourist attraction. The tiny twin sisters appear, telling two reporters that the egg was swept away from Mothra Island by the hurricane and that it contains the larval children of Mothra. It must be returned, otherwise Mothra’s children will cause much devastation in their search for food once the egg hatches. The reporters try but are unsuccessful in getting the egg back from the businessman. Godzilla starts rampaging across the countryside again and cannot be stopped by the military. The reporters convince the twin sisters that Japan’s only hope lies in them persuading Mothra to take on Godzilla. Mothra eventually comes to the battle but is weak and easily defeated by Godzilla. It is then up to Mothra’s two larval children, just having hatching from the egg, to take on Godzilla.

As Japanese monster films go, Godzilla vs the Thing is colourfully enjoyable. The effects and models are semi-competent, although decidedly variable at times – a supposed giant glass incubator is clearly nothing more than a plastic sheet. The monster battles contain an undeniable vigour with some decent scenes during the American missile attack, Godzilla’s rampages through model factories and houses, and where the military employ the usual tanks, nets and electrical pylons. This reaches a height during the showdown with Mothra with Mothra whipping up a storm with its wings and dragging Godzilla around. It’s a moderately entertaining monster bash, although it was with the subsequent entry Ghidrah the Three-Headed Monster (1964), the best entry from this era, where the 1960s Godzilla films found their paws.

Godzilla vs the Thing is certainly one of the few Godzilla films from this era that takes itself seriously, unlike many of the entries to follow in the early 1970s. Although, there are moments here that do collapse into the unintentionally absurd – the sight of Godzilla prancing around banging the larvae, which look more like turd-coloured chestnuts, on the end of his tail.

As with most of Ishiro Honda’s Godzilla films, the human characters are merely faces present to carry the film in between the devastation and spectacle. There are one-dimensional comic caricatures of a pompous politician and greedily self-important businessman. This is further added to by the flat dramatics of Honda’s direction and the usual terrible English-language dubbing.

The script even holds the odd philosophical message – with the film promoting universal brotherhood and at one point bizarrely commenting upon the decadent upper-class morality of reading newspapers. The metaphor that drove the original Godzilla, King of the Monsters (1954), wherein Godzilla stood in for the wrath and devastation of the atomic bomb, has markedly changed – this film is pro-US military intervention and even stands up to preach against people who hate those that dropped the Bomb. The devastated Infant Island still stands in as a Bomb metaphor – the last occasion Bomb metaphors would be used in the classic Godzilla films.