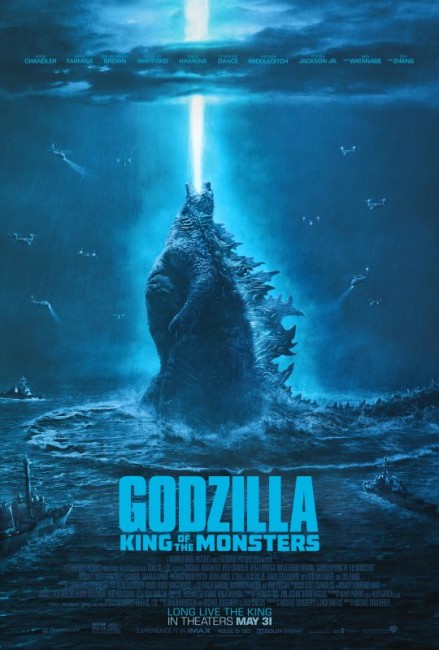 The US government is trying to decide what to do about the Titans, the number of giant monsters that have emerged in the wake of Godzilla. They want to take control away from Monarch, a private company, and place it into the hands of the military. Monarch scientist Emma Russell has developed Orca, a device that can communicate on the soundwaves the Titans do, and uses it calm the unearthed cocoon named Mothra. However, soldiers from a radical eco-terrorist organisation burst in and abduct her and her teenage daughter Madison. Emma’s estranged ex-husband Mark is brought in by Monarch to help find them. He tracks the Orca signal to an Antarctic base. He goes in as part of the rescue team only to see Emma use the Orca to bring the three-headed monster known as Ghidorah to life. She explains that she is seeking to restore a balance to the Earth by allowing the monsters loose. Ghidorah proceeds to bring a host if other monsters to life. In the mass destruction that ensues, Mark sees the only possibility of stopping them is bringing Godzilla in to fight back.

The Godzilla film has a long history that goes back to 1954 and the original Japanese film Godzilla (1954) (or Gojira going by the Japanese pronunciation), which was originally conceived as a giant atomic monster wreaking havoc on Japan. The 1954 film had extra scenes shot with Raymond Burr and was released in the US in 1956 under the title Godzilla, King of the Monsters. A series of sequels followed, while studio Toho created an entire menagerie of other monsters. Godzilla began to face off against other monsters in King Kong Vs Godzilla (1962) and then with other Toho monsters in Godzilla vs the Thing (1964) but it wasn’t until the fifth film in the series Ghidrah the Three-Headed Monster (1964) that Godzilla became a heroic figure defending Japan against other threats. The next decade saw a series of increasingly silly and more cartoonish fights with other monsters, before Godzilla 1985 (1984) made an attempt to go back to being a serious Godzilla film. The 1990s and 2000s have seen the series revisit many classic monster bashes with better effects budgets. (See below for the other Godzilla films).

The English-language Godzilla film has a much more uneven prospect. The big-budget Roland Emmerich directed Godzilla (1998) was regarded as such a disaster there are even jokes made about it in Godzilla: Final Wars (2014) – although one is prepared to argue its merits. Far better was the subsequent Godzilla (2014), which Gareth Edwards brought the Big G to life with an awe-inspiring majesty.

Godzilla, King of the Monsters is a sequel to the 2014 film. Here Warner Brothers have attempted to take a few leaves from the successes that Marvel have been having with their MCU and have created what they call their Monsterverse. Godzilla was followed by Kong: Skull Island (2017), which brought King Kong back to life and layered in background references to other Japanese monsters and the suggestion that would all meet up on screen. Kong and Godzilla are due to face off in the upcoming Godzilla vs King Kong (2020).

Audiences responded unevenly to Godzilla, King of the Monsters with box-office that was well below expectation. My suspicion is that what draws audiences in is not studios announcing “Hey we’re doing a shared universe. You’re going to love this” but people engaging with the individual films before the shared universe is announced. When Marvel started the MCU with Iron Man (2008), they had a long comic-book history and a decade of highly successful film adaptations of their properties to draw from. In other words, we went along because we liked the films and characters and it was fun watching them meet up. DC have had mixed success trying to do the same with Batman V Superman: Dawn of Justice (2016) and Justice League (2017) because nobody much liked either film enough to want to see more and crucially it felt forced when DC were trying to give us a shared universe after only the second film (DC have had much more success subsequently releasing individual films and not worrying about the shared universe). Even less success was had by Universal whose attempts to reboot their classic monsters into a shared universe has fizzled out twice with Dracula Untold (2014) and The Mummy (2017). The crucial question with the Monsterverse is are audiences engaged enough with the characters to want to see them come together? The box-office receipts for all three films so far seem to indicate a ho-hum to passable engagement.

Godzilla, King of the Monsters comes from Michael Dougherty, who started out as a screenwriter for Bryan Singer on films like X2 (2003), Superman Returns (2006) and X-Men: Apocalypse (2016), as well as Urban Legends: Bloody Mary (2005). Dougherty made his directorial debut with the Singer produced horror anthology Trick ‘R Treat (2008) and his previous film as director was the Christmas horror Krampus (2015). Dougherty’s films as director have singularly failed to leave me in any way inspired about his handling of the Godzilla franchise.

With the studio’s clear desire to push the Monserverse, Godzilla, King of the Monsters becomes almost all shared universe. We get appearances from Godzilla and the introduction of the most famous of the Japanese monsters Ghidorah, Mothra and Rodan. There are also reappearances of the MUTOs from the 2014 film, plus several references made to Kong and Skull Island. There are lots of pieces of fanservice that reference the Japanese film series – the frozen Ghidorah is nicknamed ‘Monster Zero’ – the title of the 1960s monster bash Monster Zero (1965), while the military attempt to employ the oxygen destroyer, which was used against Godzilla in the original 1954 film. The film even appropriates its title Godzilla, King of the Monsters from the one given to the US edit of the original 1954 film.

Part of the problem with Godzilla, King of the Monsters is it feels as though Michael Dougherty has taken his cue more from Michael Bay’s Transformers films than he has the Japanese Godzilla films. Although the Godzilla films of recent years like Shin Godzilla (2016) have fallen more into the Bay vein, the traditional Japanese Godzilla film is focused on two rubber monsters engaged in punch-ups. Some of the 60s/70s entries became cartoonishly absurd wrestling matches. The 90s films took the battles towards something more realistically grounded but were still about monster wrestling matches.

Michael Dougherty creates a Bay-type mass destruction spectacular. Like Bay’s films the characters are never more than cardboard cutouts whose job is to duck exploding buildings and assorted mass destruction. The monsters are gargantuan figures that are almost always seen from the ground looking up. This comes in contrast to the Japanese films where the monsters are the central characters and the camera is usually situated up around their eyeline because they are the protagonists. The monsters here are massive and distant from us, lacking almost anything in the way of distinctive personification beyond their design. Godzilla is said to be a protector and Ghidorah an aggressor but you wouldn’t know it from the lack of individuation they get as characters in the film. They fight together but the film does almost nothing to engage us as to why we should be cheering on one monster as opposed to another.

Godzilla, King of the Monsters hurtles from one oversized mass destruction sequence to the next. Like Bay’s films, the spectacle sinks into a numbing chaos that washes over you without any real effect. After a time, all you sit and do is admire the technical proficiency of the effects on display – at which you cannot deny that the various effects houses put on an entertaining show. The effects team produce moments of iconic beauty – the silhouettes of Godzilla and Ghidorah squaring off against an horizon; Rodan emerging through the clouds behind the fighter planes; Ghidorah settling down to roost on an active volcano top.

On the other hand, much of the film is noisy chaos for its own sake – it didn’t really need some of the gratuitous sequences like the bridge at the Antarctic station collapsing as Ghidorah comes to life or the eminently daft scene where Kyle Chandler conducts an impulsive move and allows a copter with rotors still buzzing to enter the bay doors of the plane. The Japanese would have killed to be able to work with budgets like this; on the other hand, you can guarantee they would have made a much more interesting film out of the mix.

(Winner for Best Special Effects at this site’s Best of 2019 Awards).