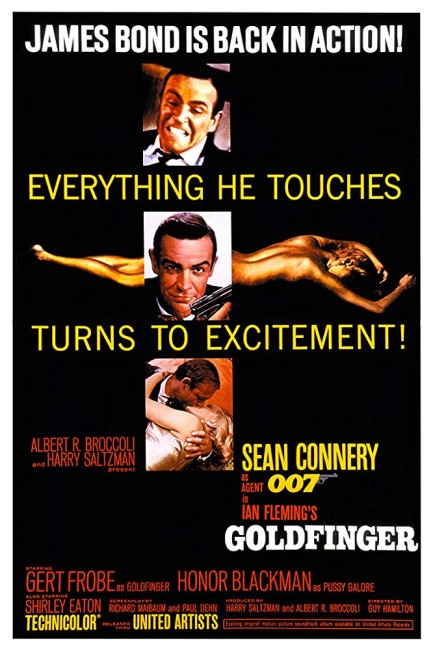 James Bond is assigned to tail Auric Goldfinger, a bullion dealer obsessed with gold who is suspected of being an international gold smuggler. The trail takes Bond from Switzerland to Kentucky where he uncovers Goldfinger’s plan to break into Fort Knox and detonate an atomic bomb that will destroy the USA’s gold reserve, thus making Goldfinger’s own gold supplies the most valuable in the world.

Everything about Goldfinger works. It is the perfect James Bond film. Every Bond film that came subsequently seemed only trying to mimic the things that Goldfinger made gel so well or else to be trying to one-up it in terms of the spectacular. However, it all begins here – the tendency away from the relative realism of the previous two entries into a giant comic-book adventure; the preponderance of gadgetry; the jet setting international locations; the poolside scenes filled out with beautiful women in bathing costumes; the giant-size sets; the self-contained pre-credits sequence; the theme song and credits sequence projected across undressed silhouetted women; and the outrageous world domination plots. Goldfinger is the point that the James Bond series managed to attain a perfect balance between suave cool and comic-book adventure.

Other later films never quite managed to keep the balance in check, with the comic-book usually being allowed to dominate to ludicrous extremes. Moreover, Goldfinger was made when all of this was fresh and original and not just part of the series formula. Compare Goldfinger to say some of the Roger Moore-John Glen entries like Octopussy (1983) and A View to a Kill (1985) and you can see just how fresh it all is here. You can almost detect a palpable sense of fun being had on the parts of both Sean Connery and director Guy Hamilton.

The suavely tongue-in-cheek tone is perfectly set by the pre-credits sequence where Bond sabotages a refinery and then emerges from the water, stripping off his scuba wetsuit to reveal a tuxedo beneath and placing a carnation in the buttonhole before going off to meet a woman waiting in his hotel room. As he kisses her we see, in one extraordinarily stylish shot, an assassin attempting to sneak up on him reflected off her eyeball – Bond shoves the assassin in the bath and electrocutes him by throwing in a heater, then with deadpan drollery comments “Shocking!”

The film is filled with other classically memorable scenes – the golf game between Bond and Goldfinger with Goldfinger cheating with golf balls dropped from Oddjob’s trouser leg; the hi-tech equivalent of the old Pearl White tied to a buzzsaw trick with Goldfinger tying Bond to a bench and directing a laser beam up toward his family jewels; the exciting climactic showdown inside Fort Knox with the countdown naturally stopping at ‘007’ seconds; the grotesquely funny demise of Goldfinger sucked out of the window of a depressurised jet.

Part of what also adds to Goldfinger‘s classic status is the pure decadence it seems to represent – the extravagance of Goldfinger driving in a Rolls Royce made out of pure gold; the remarkable scene where Bond returns to his room to find Shirley Eaton having been suffocated with gold sprayed over every pore of her body – a sequence that Ian Fleming borrowed from the horror film Bedlam (1946); and the pure wastage of an extended sequence where we see a spy killed and left inside a brand new Lincoln convertible that is then placed inside a metal crusher and returned to the waiting Oddjob as a scrunched block of metal.

There is so much that is memorable and classic about Goldfinger. The Aston Martin DB7 was the first of the Bond gadget cars with its arsenal of ejector seats, tire-shredding scythes, oil slicks, smoke screens, radar tracking systems and rotating licence plates. Former Olympic weightlifter Harold Sakata was the first and most memorable of the henchmen as the tight-lipped and unspeaking Oddjob who comes armed with a razor-tipped bowler hat capable of decapitating statues. The sets, from the marvellous multi-tiered Fort Knox interior to Goldfinger’s lair with its incredibly detailed models to demonstrate his scheme, are fabulous.

The script comes from series regular Richard Maibaum who wrote thirteen of the James Bond films, and former film critic Paul Dehn, who later wrote all of the Planet of the Apes (1968) sequels. Their script brims with classic lines: there is the line that has gone on to enter immortality in Bond fandom: “Do you expect me to talk?” “No, Mr. Bond, I expect you to die!” Sean Connery also makes an amusingly snide line that drinking Dom Perignon at room temperature is akin to “listening to The Beatles without earmuffs”. [Apparently not too offended by the comment, Beatle Paul McCartney later wrote the theme song for the James Bond film Live and Let Die (1973)].

As Goldfinger, Gert Frobe gives an amazingly boisterous performance. Up until Klaus Maria Brandauer in Never Say Never Again (1983), Gert Frobe’s Goldfinger was the most memorable of the series’ villains (even if in fact his voice was dubbed – by actor Michael Collins – because Frobe’s own German accent was too strong and his English patchy). The villain’s world domination scheme – to detonate an atomic weapon in Fort Knox, leaving the US’s gold reserves radioactive and thus increasing the value of his own supply – is the most outrageous and ingenious of any scheme in the James Bond series. What is interesting here is that the script actually improves over the scheme in the Ian Fleming novel. Fleming merely had Goldfinger breaking into Fort Knox with the improbable scheme of using an atomic weapon to blow open its doors so that he can cart the gold away. The script here specifically has Bond pointing out the impracticality of removing all the gold and instead comes up with the ingenious idea of blowing it up.

The Bond girl this time out was Honor Blackman, who was recruited direct from the success she was having as Cathy Gale opposite Patrick MacNee in the first two seasons of tv’s The Avengers (1962-9). (Ironically, after Blackman departed The Avengers, she was replaced by Diana Rigg (later to herself become a Bond girl herself in On Her Majesty’s Secret Service [1969]) and the series modeled itself closer to the surreal cartoon world of the James Bond films and became a resounding international success). Honor Blackman was not as overtly luscious and feminine as the preceding or succeeding Bond girls, rather she was a much more assertive and in charge woman. The film certainly tones down the elements from the book where Bond converts her from being a lesbian, although many people read this element as being there even though nothing is ever said in the film itself.

There are some minor flaws to the film. The locations – Switzerland and Kentucky – are not the most exciting. Cec Linder is the worst of the series various Felix Leiter’s, and the gangsters seem like a collection of stereotypes transplanted from out of a 1930s movie. Moreover it is a plot where Bond oddly remains a passive character who is kept a prisoner for a greater part of the running time and where Goldfinger, with villain-ish improbability, fails to take advantage of numerous opportunities to kill Bond off.

Director Guy Hamilton made his with the James Bond series debut here. Hamilton emerged as director of British films such as An Inspector Calls (1954) and The Colditz Story (1955) and would go onto make the likes of The Battle of Britain (1969), Force Ten from Navarone (1979) and several Agatha Christie adaptations. Hamilton made three other Bond films, Diamonds are Forever (1971), Live and Let Die (1973) and The Man with the Golden Gun (1974), all considerably more disappointing than Goldfinger. Hamilton also ventured into spy cinema with the Bond-influenced Harry Palmer film Funeral in Berlin (1966) starring Michael Caine and based on Len Deighton’s books and the wittily enjoyable Remo Williams: The First Adventure/Remo: Unarmed and Dangerous (1985), adapted from the popular Destroyer novels. Hamilton was also the original director on the Christopher Reeve Superman (1978).