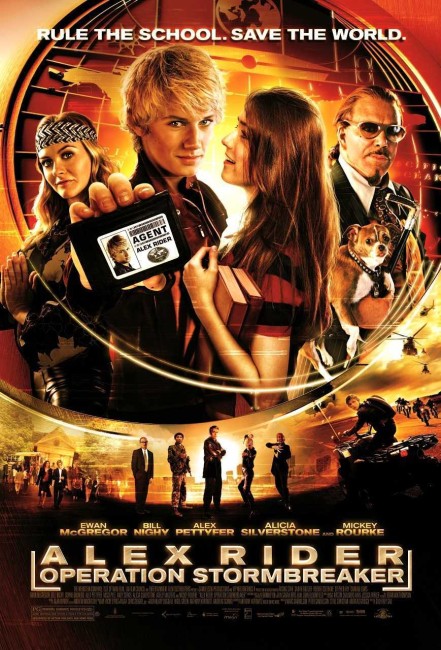 Fourteen-year-old Alex Rider is an orphan in the care of his Uncle Ian, a banker who is always away on business, and the American housekeeper Jack Starbright. Alex then learns that Uncle Ian has been killed in a car crash. After the funeral however, Alex finds that his uncle’s car is riddled with bullets. He follows a trail of clues that take him to an MI6 operations unit where he learns that Ian was not a banker but a spy. MI6 tell Alex that he has been trained by his uncle without his knowledge in the skills to be a spy. They now want to recruit him for an operation. Alex is persuaded to pose as a teen computer genius who has been invited to preview the revolutionary Stormbreaker computer network created by American industrialist Darrius Sayle, which is to be installed free in all British schools. Inside Sayle’s complex, Alex discovers Sayle’s plan to use the Stormbreaker Virtual Reality systems to distribute a deadly virus.

Stormbreaker is based on the popular Alex Rider Young Adult spy novels by Anthony Horowitz. Horowitz is a well known name in British television where he has written numerous episodes of various crime series and created Foyle’s War (2002-15), a detective series set during the Wartime Blitz. Horowitz is best known within the genre for writing a number of episodes of the fine tv series Robin of Sherwood (1983-6), as well as The Gift (1990), a mini-series about a psychically gifted kid, the time travel detective series Crime Traveller (1997) and the light-hearted invisible man series The Vanishing Man (1998).

Stormbreaker represents an attempt to launch the Alex Rider books on the big screen. All the books were optioned as film properties with an eye towards launching the series as a potential franchise – the filmmakers no doubt having the shine of Harry Potter in their eye (which is clearly signalled by a scene where Alex Pettyfer sarcastically wonders if the MI6 complex is Hogwarts). The juvenile spy franchise was attempted elsewhere in the early 2000s – Spy Kids (2001) and sequels Spy Kids 2: Island of Lost Dreams (2002) and Spy Kids 3-D: Game Over (2003), tv’s Kim Possible (2002-7) and Agent Cody Banks (2003) and Agent Cody 2 Banks: Destination London (2004). (For an overview of the genre see Spy Films). I thought Stormbreaker had a good deal of potential because I had been impressed by Anthony Horowitz’s writing elsewhere (he takes both a writing and producing credit on the film), and it seemed to be (at least going by the pre-release publicity) trying to treat the idea seriously unlike all these others.

Only Stormbreaker emerges as a thorough disappointment. The problem largely lies with Geoffrey Sax, a director from British television who previously made tv works like the Paul McGann Doctor Who (1996) tv movie and the acclaimed Tipping the Velvet (2002), as well as the theatrical ghost story White Noise (2005).

It is a bad case of the Alex Rider intellectual property having landed in the hands of a director who seems to have little feel for the material. Horowitz appears to have written the books with a certain seriousness, albeit the same level of tongue-in-cheek seriousness that most of the James Bond films take themselves, but certainly not in an inherently parodistic way. On screen however, you cannot decide whether Sax is trying to play Stormbreaker seriously or as a silly and over-the-top. The film seems to wildly differ in tone from scene to scene.

There was a fad for parodies of the James Bond movies that came out after the success of Austin Powers, International Man of Mystery (1997) and sequels. Some of the time Stormbreaker seems to be trying to do this – Bill Nighy launches into an equivalent of the M role with an amusingly dry sarcasm, while Stephen Fry seems to be trying to conduct a parody of the Q gadgeteer – but the film could not be considered a parody. Certainly, both the aforementioned Spy Kids and Agent Cody Banks films use their teenage spy concept to conduct far more in the way of parody of spy clichés than anything in Stormbreaker does.

The majority of Stormbreaker has been played as a straight spy adventure. Despite this, there are some scenes that come across as incredibly silly – like where Alex Pettyfer returns home and everything is edited in a way to suggest that there is a samurai assassin waiting in the house to kill him, but it only turns out to be Alicia Silverstone who has dressed in traditional Japanese costumery and is using a katana to chop sushi for the evening meal. The worst scene is a fight sequence between Alicia Silverstone and Missi Pyle with either using various kitchen implements as weapons, where Sax keeps cutting away to the tv flipping channel and punctuating the action with various happenings and sound effects, before Silverstone disposes of Pyle by impaling her with the poisonous blowfish she is cooking. One was immediately made to think of the inane fight sequences in the disastrous live-action Thunderbirds (2004).

While the rest of the action scenes are played straight, most of these – the chases on a bicycle, Alex Pettyfer trying to escape from a car that is being crushed, his use of a rope to fight off about a dozen thugs, the climactic horse chase – have never felt more boiler-plated on than they do here. It is hard to think of a recent film where the director could not seem more disinterested in the material.

On a wider level, one ends up disappointed with Anthony Horowitz’s screenplay. Mickey Rourke’s world domination scheme seems rather lame and improbable. Although one was kind of amused by Horowitz’s reversal of the typecasting that occurs in most Hollywood movies where the English are cast as villains, where instead here he has the villain as a vulgar American who has launched a revenge scheme because his vulgarity was made fun of while attending an exclusive British boarding school.

Some of the performances in the film are not too bad. Bill Nighy appears to be having fun with his part, even though he is made up to look like a cadaverous civil servant, while Andy Serkis makes for an alarming henchman and Missi Pyle’s assistant has been construed as the live-action equivalent of a cartoon villain. Even more fun seems to be had by Mickey Rourke – an actor who had been spectacularly treading the comeback trail in the last couple of years prior to this in Sin City (2005) and the subsequent The Wrestler (2008). Rourke is bizarrely made-up, wearing mascara and his face given a weather-beaten pockmarked texture that makes him look like a louche version of Gary Oldman in Bram Stoker’s Dracula (1992). Hero Alex Pettyfer, a few years before becoming a hot Hollywood sensation, has been chosen for his handsome charm and acquits himself reasonably. However, other names such as Ewan McGregor, Robbie Coltrane and the immensely talented Sophie Okonedo are badly underused.