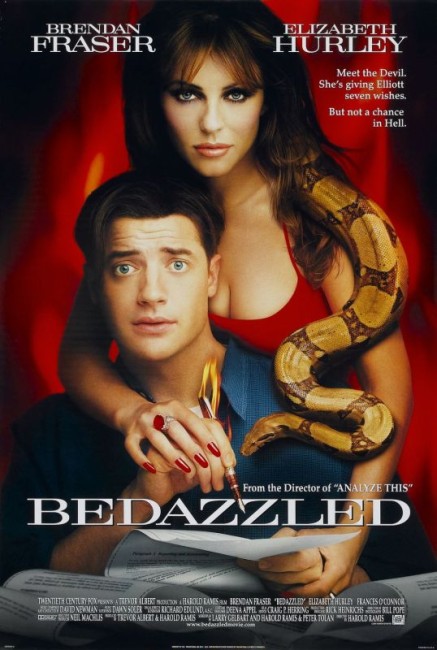 Elliot Richards is a lonely, socially ill-adept San Francisco tech support worker who pines after colleague Allison Gardiner, although has never spoken to her in the three years she has been on the job. He is then visited by a seductive and beautiful woman who tells him she is The Devil and offers Elliot seven wishes in return for his soul. Elliot accepts the offer, using his wishes to win Allison. However, in each case, whatever he wishes for – wealth, success, sensitivity, fame, eloquence – The Devil twists around the wording of his wish to make life miserable for him.

This is a remake of Bedazzled (1967), a British black comedy that starred and was written by two renowned comedy performers, Peter Cook and Dudley Moore. Both films have essentially the same story wherein The Devil offers a hapless schmuck seven wishes but uses trickery to get around the wording of each wish and make his life miserable.

Both are very different films. For one, there is the replacement of the fey, Cockney-accented Peter Cook with Elizabeth Hurley oozing seductivity and thoroughly overacting in the role of The Devil. More so though, Bedazzled 2000 is an A-budget Hollywood mainstream comedy that arrays lavish sets and costumery and CGI manifestations of The Devil, while Bedazzled 1967 was a modestly budgeted comedy where the effect was all in the savagery of its bite.

In fact, the difference between both films is the perfect measure of the difference between British and American comedy – without wishing to overstretch analogies, you could even argue that it represents the difference between both countries culturally. Britain is a country rooted in a firm class hierarchy and as a result its comedy is frequently bitter and resigned to life being the way it is; America, on the other hand, is a supposedly classless society that was founded by the Puritans and prides itself upon democracy and as a result its comedy lacks savagery, is nice to everybody and there is always a positive uplifting moral at the end.

That is in essence the difference between both versions of Bedazzled. Bedazzled 1967 is a conte cruel where the filmmakers rail against the inherent meanness of what is inflicted upon the hapless hero; in Bedazzled 2000, The Devil’s twists are less cruel than they are the punchline of a joke. In Bedazzled 1967, there is something deliciously appealing about Peter Cook’s pranks, ripping out the last pages of whodunnits, flipping parking meters, being mean to old ladies and so on; but the same here only registers as juvenile wit.

At most, Bedazzled 2000‘s scenarios have an amusing cuteness to them, especially in seeing Brendan Fraser’s various transformations – as a Columbian drug dealer speaking subtitled Spanish; into the world’s most sensitive guy, a geek with tousled red hair and freckles; and a giant-size parody of Denis Rodman – but the way the film wheels out each transformation it is intended as the set-piece in itself where we are supposed to applaud the cuteness of Brendan Fraser’s transformation, not the inherent humour in the scenario.

There is little that is funny in the film itself. Every gag is spelt out for its audience. This is all the more disappointing considering that it is directed by Harold Ramis, the comedy actor turned comedy director who has made several forays into fantasy (see below). Ramis’s other films show a good understanding of the mechanics of mainstream comedy so exactly why Ramis allowed the machinery of the A-budget film to wring all the comedy, the irony, even anything approaching subtlety out of this film, is a mystery.

The worst part is probably the ending that dismisses all that has gone before in regard to Brendan Fraser selling his soul with a casual flick of the plot. This is followed by a coda where the hero doesn’t get the girl but instead meets a lookalike. Unlike Bedazzled 1967, the remake reiterates a handful of conservative fantasy cliches – that underdogs are better off accepting their lot in life and that to desire more than they have is to invite a cursed wish; that anything that is worth having is only that which is earned and won through self-determination; and that good-natured people that persevere will eventually get their due rewards.

(Winner Worst Sequel/Remake at this site’s Best/Worst of 2000 Awards).