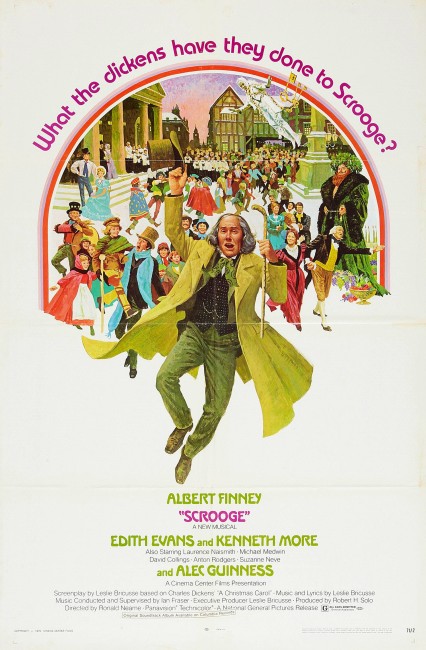 On Christmas Eve, miserly Ebenezer Scrooge receives a visit from the ghosts of Christmas Past, Christmas Present and Christmas Yet to Come who show him how his miserliness affects others and warn him of the fate that awaits him in Hell unless he changes his ways.

Charles Dickens’ A Christmas Carol (1843) is a perennial that filmmakers see some need to trot out a new adaptation of every few years. There is a lengthy list of the numerous film adaptations at the bottom of the page.

This big-budget musical adaptation is no better or any worse than any other version. The story has been padded in a peculiarly oversized way, adding scenes of Scrooge’s trip down to Hell, flights through phantom-filled skies and flashbacks to Scrooge’s romance with Fezziwig’s daughter. These do not serve any particular narrative purpose that the original story didn’t already provide.

There has been a clear attempt to try and turn Scrooge into a 1960s musical a la My Fair Lady (1964) et al, even though such does not easily suit a story like A Christmas Carol – the casting, for instance, tries to squeeze as many members of the British Screen Actors Guild in as possible, although it is not a star-turn type of story. The songs, courtesy of Doctor Dolittle (1967) songwriter Leslie Bricusse, are often nice – Scrooge’s plaintive song for Isabelle “You were so true to me,” comes with naked emotion, especially when it is uttered by a character such as he.

As Scrooge, Albert Finney gives a performance that seems patently and obviously a theatrical one, although is a good performance nonetheless – he convinces one of Scrooge’s misanthropy in a physical way and lets loose with an acidic London accent that hits the character spot on. Although, once the character has repented, the sight of Albert Finney charging about in a bandy-legged, blithering dementia, like an old prospector doped up on moonshine, is a more dubious proposition.

British born Ronald Neame was a former cinematographer who had become a director in the late 1940s. Prior to this, Neame had made the acclaimed The Prime of Miss Jean Brodie (1969) and subsequently went on to make The Poseidon Adventure (1972) and Meteor (1979).