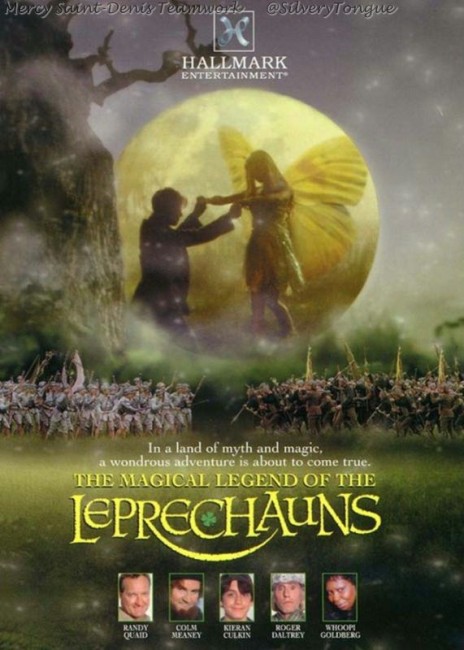 Jack Woods is sent from New York to rural Kerry in Ireland to assess the land for tourist redevelopment. Jack sees a man being washed away on a log and jumps into the river to rescue him. He is startled to find that the man is Seamus Muldoon, a leprechaun who lives in the cottage that Jack has just rented. Jack befriends Seamus and his feisty wife Mary. Jack also becomes attracted to his neighbour Kathleen Fitzpatrick after accidentally seeing her bathing in the river. However, Kathleen and her brothers are determined to lynch Jack as a peeping tom. Meanwhile, Seamus’s son Mickey and his friends have snuck into the Summer Ball of the fairies, the leprechauns’ traditional enemies, to create mischief. Instead Mickey ends up falling for the Fairy King’s daughter Jessica. Mickey’s determined efforts to return and see Jessica bring the leprechauns and fairies to war with one another but because the leprechauns and fairies have ignored The Grand Banshee’s warnings, their war is causing the balance of nature to go amok.

The Magical Legend of the Leprechauns is a tv mini-series from Hallmark Entertainment, the production division of the Hallmark tv channel. Hallmark have made a great many adaptations of classic literary works and mini-series/movies based on fairytales, myths and legends. The Magical Land of the Leprechauns is not based on any other works; rather it roots itself in the leprechauns of Irish legend, which have appeared on films numerous times – see the likes of The Luck of the Irish (1948), Darby O’Gill and the Little People (1959), Finian’s Rainbow (1968), Leapin’ Leprechauns! (1995), The Luck of the Irish (2001), and of course the horror film Leprechaun (1993) and sequels.

The mini-series comes with an appealingly silly giddiness – buggy races, leprechauns riding sheep, dances everywhere (the mini-series has clearly takes a few leafs from the Riverdance fad that was massive at the time it was made). It is all run over with a lively lilting score. There are some lovely locations (which ironically were shot in England rather than Ireland). Director John Henderson creates some appealingly imaginative fantastical touches – butter spirits, a headless ghost, a frog that blows a bubble that encases it and gently carries it up through the air, a salmon leaping out of the river to spit in Randy Quaid’s face.

The sequence where the leprechauns are tossed through the air to assail the fairy palace and the others all scale up on ropes is visually magnificent. The scene where the Fitzpatrick brothers give the leprechauns military training is a comic gem. The visual effects that allow miniature and full-size actors to be combined together are expertly done.

The script is predictable and one can see all the arcs that the characters will take – Randy Quaid has an eminently obvious one of the man from the business fast lane who comes to discover the beauties of rural life; while you can equally easily see that he will inevitably get together with Orla Brady despite their prickly first meeting. The leprechaun/fairy romance across warring factions has been borrowed from Shakespeare’s Romeo and Juliet (1597). It all proves an enjoyable and appealingly lively concoction.