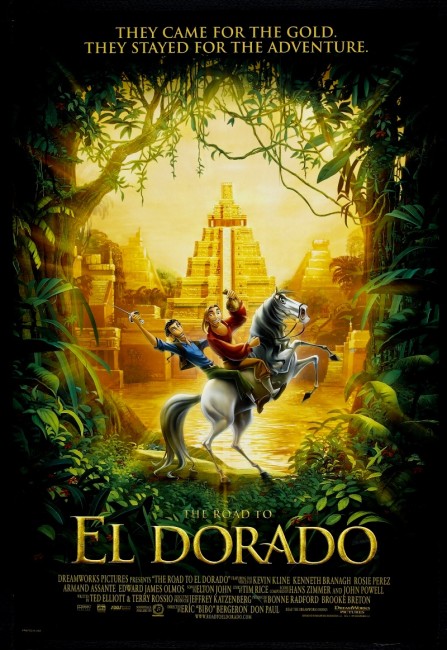 Fleeing a congame gone wrong, two likeable Spanish rogues Miguel and Tulio are accidentally caught on board Cortez’s ship as it sets sail to conquer the New World. Escaping the brig with Cortez’s horse Altivo, they arrive upon land and follow a map that Miguel won in a dice game that leads them to El Dorado, the fabulous lost Aztec city of gold. There they are hailed as gods and fill the roles with the help of the conniving Aztec girl Chel who wants to return to Spain with them in return for a cut of the profits. However, the scheming high-priest Tzekel-Kan insists that as gods Miguel and Tulio must institute fear and human sacrifice.

The Road to El Dorado stirs all the cliches of the South American adventure genre – of white men encountering lost tribes and fabulous cities of gold, tribes mistaking the first white people they see for gods yada yada. (About the only cliché of the genre the film doesn’t use is the one about the white men about to be sacrificed and using their convenient knowledge of solar eclipses to silence the disbelieving sun-worshippers). There are a number of plot holes – the Spanish and Aztecs are able to speak to one another without any linguistic divide. And if Tulio and Miguel are the first White Men to El Dorado, who created the map they obtained in Spain?

The film adopts the new Politically Correct views of modern Disney and paints Hernando Cortez as a pillager of native cultures. No problems with that but the film’s portrait of Aztec culture falls into a certain wiggist jingoism of its own wherein the culture is seen as being neatly divided between the evil human-sacrificing priest on one side and the good, pure-hearted native peoples on the other. This bowdlerises Aztec culture in ways that make it historically inaccurate – human sacrifice was very much part of the Aztec culture but it was born less of fear and control than it was out of respect for life – it was considered a huge honour to be sacrificed. Furthermore, the Aztecs were a ferociously warlike race who subjugated and enslaved other tribes for hundreds of miles around – to call them simple and ordinary people is wildly inaccurate.

While also on the subject of anachronism, Rosie Perez’s ‘gold’-digger is far too much of a modern characterisation – she is too liberated for what would have been permissible in such a society and moreover her desire to steal the gold and wanting a share of the profits does not ring believable as the Aztecs simply had no concept of the monetary value of their gold.

For all its cliches, plot holes and creative cultural rewriting, The Road to El Dorado is an enjoyable effort. And that is for the simple reason that it avoids the two recurrent sins of modern Disney films. Firstly, it is without Disney’s exaggerated artistic pretensions – the artwork is unobtrusively spectacular, it is not trying to dazzle and awe us every moment, although it often does. (The design work does make some uniquely colourful and psychedelic usage of Aztec art).

And secondly, the film tells a good-natured, rollicking adventure where the action is not constantly being distracted, as in Disney’s Aladdin and Hercules (1997), by contemporary culture in-jokes and references. The action scenes do feel routinely grafted on at regular intervals – flights from bulls and incarnated monsters and the race to bring down the pillar, although there is an enjoyable soccer game sequence.

On the minus side, the film seems to lead up to but fails to deliver a grand face-off with Cortez. Armand Assante gives a wonderfully oily performance as the high priest and The Road to El Dorado, in its lightweight, unassuming way proves unpretentiously enjoyable.

Eric ‘Bibo’ Bergeron subsequently went onto co-direct DreamWorks’ Shark Tale (2004) and solo direct A Monster in Paris (2011) in his native France. Don Paul has yet to direct another film.