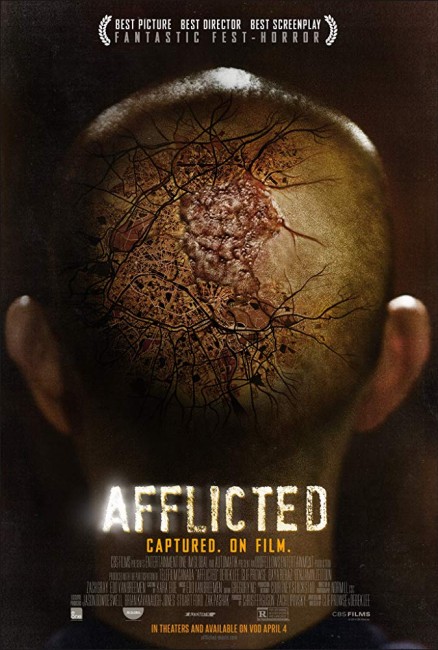 Best friends Clif Prowse and Derek Lee depart from Canada on a world tour. Derek has been diagnosed with a potentially fatal brain aneurism and wants to go on a big adventure before he might die. Cliff, a filmmaker, has taken a bunch of video equipment with them so that they can record and upload their experiences to a blog. In a French bar, Derek picks up a woman Audrey and takes her back to his hotel. The others come back to find Derek covered in blood. The next day, despite obvious signs that he is not well, Derek insists that they head on to Italy. Soon however, he starts to become progressively more ill – being burned by sunlight and vomiting violently after eating garlic. He then begins to demonstrate super-strength and the ability to leap fantastic distances. As Derek demonstrates a preference for blood, Clif realises that Derek has become a vampire.

Afflicted was not the first genre attempt to conduct a Found Footage vampire film – the idea had been done before by the British Vampire Diary (2006) – and was followed not long after by Black Water Vampire (2014) and skewered with hilarious results in the New Zealand comedy What We Do in the Shadows (2014).

Afflicted comes from Canadian directors Clif Prowse and Derek Lee. Prowse had previously worked as an assistant director on several films. The two had earlier made four short films as co-directors and make their feature-length debut here. The two also play the central characters and do the good old Blair Witch standby of naming the characters after themselves. Afflicted premiered at the 2013 Toronto International Film Festival and played at several fantastic film festivals before obtaining a theatrical release in 2014.

In the initial parts of Afflicted, with Lee and Prowse introducing themselves and setting out on their world tour, the film failed to get one terribly excited. It just seemed to be trying by a little too much to work – the two characters never seem to do much to engage us, for instance. Moreover, the Found Footage genre is so played out you are tired of yet another film trying to copy its moves. I went along with it as the tour started but then, after about the point that the film arrived at the Italian vineyard, a funny thing happened – Afflicted started to work.

A Found Footage vampire film is stuck with certain constraints. With its constant handheld and shakycam effect, it is restricted in terms of creating atmosphere on which the vampire film is traditionally dependent. Thus, rather than anything akin to any vampire film that has gone before, the early scenes resemble something more along the lines of Chronicle (2012) where the characters are discovering their superpowers – scenes with Derek Lee’s skin bursting into flame in the sunlight; he getting frustrated and punching holes in stone walls or smashing boulders with his fist; making massive leaps up the frontispiece of buildings; running at super-speed; throwing people they encounter in the street about and so on.

This soon settles down into a fairly solid horror film. The basic plot set-up is one stolen from An American Werewolf in London (1981) – two tourists in Europe get infected by a classic monster and spent the rest of the film trying to come to terms with what this means. We get some more than effective scenes with the bugged-out Derek Lee reduced to a zombie blankly reacting to the nearness of human blood or found halfway up the wall. There is a worthwhile scene with Lee fighting his sire Beya Rehaz in an abandoned building near the end where she tries to impart the truth of his condition to him.

Essentially though, Afflicted in one-gag film – once the not terribly well kept secret of what is happening is out of the bag, that is the whole of the film and the rest consists of watching various aspects of vampire lore played out as Found Footage. Nevertheless, the film must be commended for playing its premise out logically and doing so with quite reasonable effect.