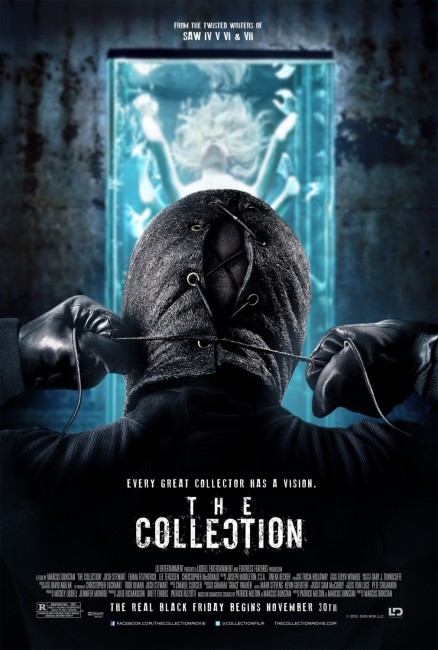 Elena and two friends go to an underground nightclub being held at a warehouse. This turns out to be a trap set by The Collector who massacres all the attendees. In the midst of this, Elena discovers a box with Arkin imprisoned inside and frees him, only to then be captured herself. Arkin makes an escape from the building by jumping out the window. Coming around in the hospital, he is recruited by a team of armed mercenaries headed by Lucello who have been hired by Elena’s father to find her. They want Arkin to lead them to The Collector’s lair. Arkin agrees so long as he does not have to go inside. He follows a route that takes them to the abandoned Hotel Argento but once there Lucello forces him at gunpoint to go in with them. Inside, they encounter the victims that The Collector keeps imprisoned for his sadistic games. As they move through the building, they discover that The Collector has turned the entire hotel into a series of deadly traps.

The Collector was always set up for a sequel and it emerges here with The Collection. No matter how you regard The Collector, The Collection emerges as a considerable disappointment in comparison. The focus of the two stories has changed. The Collector was about a man trapped inside an ordinary home and trying to navigate through something familiar that had been turned into a surreal world of deadly traps.

The focus in The Collection is very different. Josh Stewart is still the hero – however, this time he has been forcibly recruited by a team of armed mercenaries who are entering into The Collector’s lair in a disused hotel. The Collection almost resembles a Halloween haunted house as the members of the group venture into a series of rooms, each of which holds a different menace or trap – even a cellarful of zombified drug addicts during one of the film’s more absurd points. Equally, the original’s furtively subterranean darklit look has been abandoned in favour of standard, run of the mill videography shot at ordinary room lighting levels.

More importantly, The Collection disappoints in terms of the Torture Porn extremes of the first film and Dunstan and Melton’s Saw films. You get a sinking feeling with this one when the first major sadism set-piece is the absurd looking one where The Collector brings a scythe device that looks like the thresher on a combine harvester down to massacre dozens of dancing patrons at a nightclub. None of the rest of the film improves on that much – a victim crushed in an iron maiden, throats being slashed, various mercenaries being impaled by trap devices – and so on. These are routinely conveyed and hold none of the grimness with which we saw people being despatched in Hostel (2005) or the Saw sequels.

Marcus Dunstan subsequently went on to direct The Neighbor (2016).