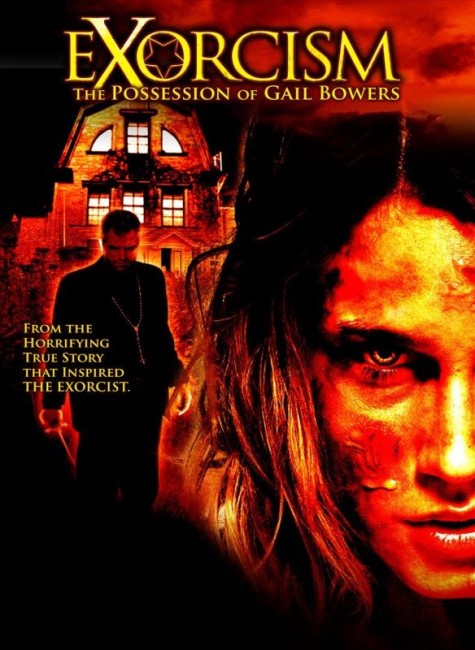 Following the death of her parents, teenager Gail Bowers has come to stay with her older sister Anne and Anne’s husband Clark. They have custody of Gail until she becomes an adult but Gail rebels against their insistence that she go on to college after graduating. Gail befriends neighbour Francie who bring an ouija board over to play with, suggesting that Gail can use it to contact her parents. At night, Gail feels a dark presence in her room and on top of her. Afterwards, Gail’s behaviour becomes more malicious. After Anne finds Gail coming on to Clark sexually, they take her to a psychologist. However, when she starts to manifest psychic phenomena, his only advice is that they bring in a priest to conduct an exorcism.

The Asylum is a company that has had some success in recent years specialising in low-budget films that come out mimicking the titles of big-budget, high-profile releases in the hopes that people won’t look too closely or notice the difference. It is a strategy they call ‘mockbusters’ and has produced titles such as Snakes on a Train (2006), Transmorphers (2007), Allan Quatermain and the Temple of Skulls (2008), The Day the Earth Stopped (2008), The 18 Year Old Virgin (2009), Paranormal Entity (2009), Battle of Los Angeles (2011), Abraham Lincoln vs. Zombies (2012), Age of the Hobbits (2012), among others.

Exorcism: The Possession of Gail Bowers was The Asylum’s mockbuster response to the hit of The Exorcism of Emily Rose (2005) – a few years later they offered a far more direct Found Footage knockoff with Anneliese: The Exorcist Tapes (2011). The Asylum have simply riffed on all the cliches of the exorcism and possession genre that were well and truly set in place by this point and would be ground into tedious repetition by other imitators over the next few years. There is the implied conservative Christian agenda – the possessed is a teenage girl who is rebelling against (step)-parental authority telling her how to run her life; she becomes possessed after using an ouija board; she begins to act in an assertively sexual way after becoming possessed.

The first half of Exorcism: The Possession of Gail Bowers is fairly shabby. There are random deaths for no real reason – the morning after Erica Roby uses the ouija board, her friend Rebekah Kochan comes to visit, flees back home after Erica turns mean where she starts scratching her cheeks in the bathroom and then gets into the shower and gouges her eyes out. Leigh Scott even blatantly borrows the memorable jumpshock of a white figure unexpectedly running across a hallway in the background from The Exorcist III (1990).

On the other hand, there is the mid-point where the film starts to discover itself and Leigh Scott leaps in with a go-for-broke trashiness that all of the possession films that came after Emily Rose balked at. There is the scene where Brick Firstone (a pseudonym for Asylum regular actor and director Griff Furst) is in the kitchen and Erica Roby comes out, slides her hands into her pj bottoms and starts touching herself, before she is discovered there by Griff’s wife Noel Thurman, Noel puts her to bed whereupon Erica starts taunting her about their lack of sex life and offering to do things for Griff, including taking it up the ass. Later Erica Roby is troubled by dream sequences of her bloodily stabbing Griff and Noel in their beds. In another scene, Griff is having sex with Noel Thurman and she turns into Erica Roby beneath him where even we are not sure which woman he is having sex with. (It is also fairly daring for a film showing sex with what it is telling us is an underage girl). The climactic exorcism is old hat stuff but Leigh Scott launches into it with barnstorming regard. It is something that readily transcends the cheapness of the rest of the film and indeed most of The Asylum’s mockbusters.