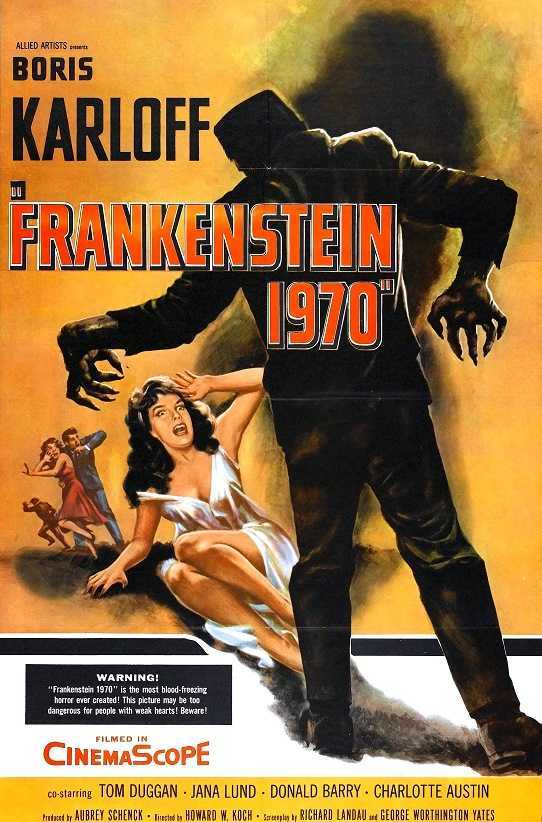 Baron Victor von Frankenstein is trying to keep the family tradition alive. Impoverished and with no funds to buy the atomic reactor he needs, the Baron has been forced to rent the family castle out. It is currently being used as a location by an American film crew who have come to Germany to make a film about the 250th anniversary of the original Frankenstein experiments. The Baron uses his newly purchased atomic reactor to reanimate the corpse he has built. However, the hulking monster then starts preying on the film crew.

The horror genre where Karloff came to fame had peaked in the 1930s and 40s but was fading in popularity by the 1950s. As a result, Karloff ended up appearing in some cheap fare to pay the bills. Indeed, you cannot help but think that the plot of the film – an aging Frankenstein has become impoverished and resents having to sell off the family heirlooms and rent out the castle to crass American filmmakers just to keep his experiments going – is symbolic for the state of Karloff’s career at that point in time. At the age of 71, he launches into the role with a determined venom. It’s a part that gives him something to get his teeth into, the likes of which he hadn’t had for a few years.

Frankenstein 1970 is a B movie but it looks a good deal better. It was shot on the Warner Brothers lot and clearly had access to the studio’s stock sets, which are used to create a fairly impressive looking castle interior, especially when we get down to the catacombs. The film is also shot in widescreen Cinemascope (although not in colour) but was only released to VHS in a tv-cropped print for many years until this was restored in the 2009 dvd release.

The title makes an attempt to drag the Frankenstein story into what was then a future setting (twelve years ahead of when the film was released) – although in all other regards it appears to be set contemporary. There are some interesting cotemporary references such as Frankenstein comparing horrors to the Belsen concentration camp. And of course the fact that he employs an atomic reactor rather than bring the monster to life with the usual harnessed electricity (which technically means that the Frankenstein monster here falls into the 1950s fad for atomic monsters). The idea of a date appended to the Frankenstein name was used by several subsequent films with Frankenstein ’80 (1972), Frankenstein 90 (1984) and Frankenstein 2000 (1992).

The plot is routine and unexceptional. Frankenstein attempts to perfect his monster, monster is revived and starts picking off the American film crew one by one. That is about the sum of the film. Mostly the show is made by Boris Karloff’s performance. One of the cheaper disappointments is that when the monster is revived it is played by 6’8” former wrestler Mike Lane. It comes with bandages across its face for the entire show, which make it look as though Lane is wearing an oversized bucket on his head (and tends to make the monster resemble a mummy). The disappointment is that we never get to see its face until right at the end when it is unmasked and it puzzlingly proves to be Karloff’s own face.

Director Howard W. Koch made a handful of dramatic and drive-in films during the 1960s but no other genre works. He did far more work as a producer, making a great many Westerns during this period, later moving into tv and producing several of the Academy Awards shows. His other genre works as producer include The Black Sleep (1956), The Pharaoh’s Curse (1957), Voodoo Island (1957), The Manchurian Candidate (1962), The President’s Analyst (1967), On a Clear Day You Can See Forever (1970), Dragonslayer (1981) and Airplane II: The Sequel (1982).