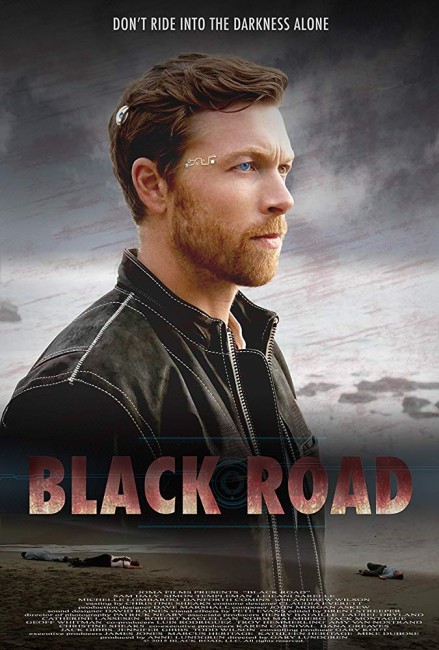 The year 2029 after seven US states, including California and Oregon, have seceded to form the Free State of Jefferson. Dylan Grant, a former soldier who has a neural implant in the form of the A.I. Clyde, returns to Jefferson after a long absence to find his wife Sarah has taken up with another man. He is in need of money but the whole area is in a financial slump. After saving Lisa Clark from an attacker in a bar, Dylan spends the night with her. In the morning, Lisa offers Dylan a job – that of securing a divorce settlement from her husband Sterling, a former cult leader turned weapons manufacturer. However, Sterling proves a dangerous individual, while insisting that what Lisa is telling Dylan is not the truth.

Black Road creates the interesting setting of a not-too-distant future where several US states have seceded from the rest of the country – it is not specified which states but included amongst these are California and Oregon. This is not too improbable a scenario as in recent years various US states have openly threatened to do on different occasions depending on their liking of Presidents Obama and Trump, although so far this has never amounted to much more than hot air. The disappointment with this though is that the setting is never integral to the story beyond forming a backdrop in the opening few scenes – I, for instance, would have liked to have seen more of the politics that led to such a situation and how the secessionists would interact with the rest of the country.

The film features a cyborg hero. On one level, you could compare Black Road to one of the future cyborg action films of Albert Pyun – Cyborg (1989), Knights (1993), Nemesis (1993) and sequels, Heatseeker (1004), Omega Doom (1995) – but Gary Lundgren has little interest in making an action film. Rather what we have could almost be considered a futuristic version of a 1940s film noir detective story. Leilani Sarelle is the morally ambiguous femme fatale who persuades down-on-his-luck ex-soldier Sam Daly to undertake a investigation into her estranged husband Simon Templeman in search of a big payoff only for Daly to uncover a whole can of worms where he cannot be sure who to trust. It would not be hard to see this rewritten substituting Oregon’s wide open spaces for the cliche slatted venetian blinds and twirling fans of film noir and with Templeman cast as a wealthy L.A. businessman and Sam Daly as perhaps a former G.I, drawn into the scheme and his A.I. implant as a secretary.

Black Road works okay. The set-up and the hero holds attention for a time. Sam Daly makes for a passable lead – I did not realise until I looked up what else he had done afterwards that he was the son of Tim Daly. The main problem is that Gary Lundgren doesn’t have a large budget at his disposal and so lacks the resources to make the world or story that interesting in terms of science-fiction scenarios. The plot eventually peters out in a not terribly interesting mundane resolution. Despite a reasonable effort made, it is just a little on the low-key side.