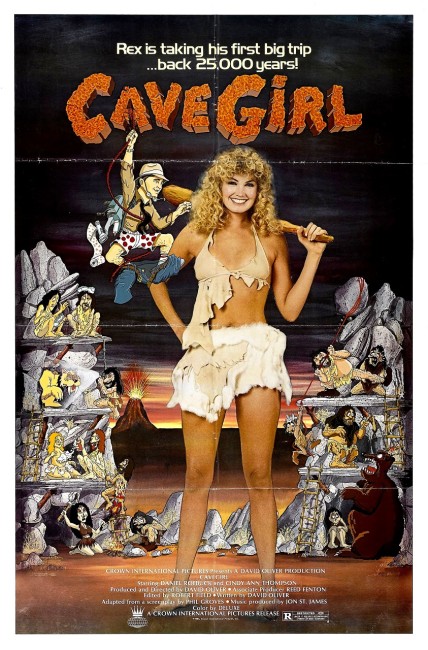 Rex Tarrison is the class nerd at high school. During a class field trip, Rex wanders onto a missile test range and comes across a cave in which he discovers a strange crystal. When he touches the crystal, its vibrations throw him back in time to the Stone Age. There Rex’s 20th Century knowledge gives him a distinct advantage over the bumbling cavemen. However, he is still faltering when it comes to getting anywhere with the beautiful Eva.

The prehistoric drama, with its cavemen in loincloths and cavewomen in fur bikinis battling dinosaurs, has always been a fairly creaky genre. It reached its apotheosis with the classic One Million Years B.C. (1966) but the genre died away almost entirely after the early 1970s. Any films that came after this point either deconstructed the genre with anthropological realism – Quest for Fire (1981), Iceman (1984) or Clan of the Cave Bear (1986) – or spoofed it – Caveman (1981), tv’s Dinosaurs (1991-3), Encino Man/California Man (1992). Cavegirl is a modern effort that can fall into this second category. It might be considered a conceptual collision between the prehistoric spoofery of Caveman – albeit without any dinosaurs – and the teen makeout film of the 1980s a la Lemon Popsicle (1978) or Porky’s (1982).

That the first thing that Daniel Roebuck teaches cavegirl Cindy Ann Thompson to say is “I want to sit on your face” should give a clear indication of the level that the film is coming from. Indeed, Cavegirl only exists as a rambling series of witless gags – Daniel Roebuck finding glue has been placed on his seat in class; or someone removing the ‘wo’ from the ‘Women Only’ sign on the girl’s locker room, resulting in Roebuck being pursued by a horde of topless girls.

Even when we get into the past, the lame gags go on and on with the cavemen upsetting everything Daniel Roebuck does – causing his makeshift bed to collapse, fooling about with his shaving cream, using his tarpaulin as a trampoline. All the film seems to consist of is this inanity up until about the two-thirds mark when it gains some drama as Daniel Roebuck is forced to use his modern knowhow to save Cindy Ann Thompson and the rest of the cavemen from a rival tribe of cannibals.

A distractingly bland pop score warbles away most of the time, often inserted entirely inappropriately to the action going on. It is never explained what the crystal is or even the significance of the missile tests. Daniel Roebuck is a rather dopey and stolid lead and does not exactly make for a likeable hero. On the other side of the coin, as the titular cavegirl, Cindy Ann Thompson has a sweetly sunny smile that proves quite catching.