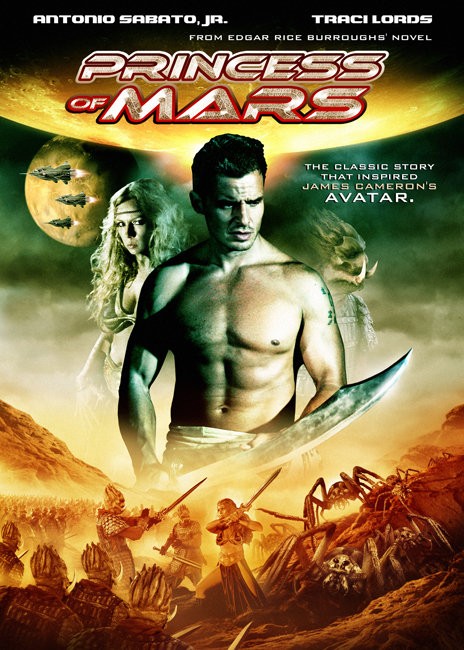 aka Avatar of Mars; The Martian Colony Wars

John Carter is a US Special Forces operative undercover in Afghanistan. After being shot and left for dead during a skirmish with opium dealers, the military take Carter’s dying body and introduce him to an experimental program. They need someone to explore the newly discovered planet of Mars 216 and have a process that allows his mind to be uploaded and he bodily relocated on the other planet. Arriving on Mars 216, or Barsoom as the locals call it, Carter finds that he now has enormous strength and can leap more than a hundred feet into the air. He is taken prisoner by the reptilian humanoid Tharks but earns the respect of the troupe’s leader Tars Tarkas by showing himself in battle against attacking giant spiders. Tars Tarkas grants Carter the rank of Jeddak among the Tharks. The Tharks then shoot down an airship. Boarding it, Carter learns that Dejah Thoris, the Princess of Helium, has just escaped. He rescues her but is forced to surrender her into Thark custody. When Dejah is taken before the Thark leader Tal Hajus, Tal becomes angry and demotes Tars for promoting Carter, as well as throws Dejah into his harem and places Carter in the arena. Carter then learns that Sarka, the opium dealer who shot him on Earth, has also been incarnated on Barsoom and wants Dejah for himself. Carter escapes and sets out to prevent Sarka’s plan to take control of the air pumping stations and become the ruler of Barsoom.

A Princess of Mars (1912) was a novel by Edgar Rice Burroughs, the creator of Tarzan. Indeed, A Princess of Mars was Burroughs’ first published novel, initially serialised in All-Story Magazine under the title Under the Moons of Mars and later released in book form under its commonly known title after Burroughs’ subsequent success with the Tarzan stories. Edgar Rice Burroughs created a memorable fantasy version of Mars that was designed as pure adventure. The popularity of A Princess of Mars proved such that Burroughs produced a further ten John Carter books. More importantly, Edgar Rice Burroughs created the genre that has become known variously as ‘planetary adventure’, ‘planetary romance’ or ‘sword and raygun’. This mixes the interplanetary space opera escapades of Star Wars (1977) and E.E. ‘Doc’ Smith with the sword and sorcery of J.R.R. Tolkien and Robert E. Howard – here the story is restricted to a singular planetary locale and with rayguns and forcefields in lieu of swords and magic. The most famous example of the planetary romance is Flash Gordon, while other works like the Darkover series by Marion Zimmer Bradley and John Norman’s Gor books owe a huge debt of inspiration to Edgar Rice Burroughs. Even the recent Avatar (2009) falls very much into the planetary romance genre. Edgar Rice Burroughs’ influence on the fantasy of Mars is such that many works of science-fiction – Kim Stanley Robinson’s Mars series and tv’s – call the first city on Mars Burroughs, while John Carter also makes an appearance in the League of Extraordinary Gentlemen graphic novels.

A film version of the Burroughs book has been planned as far back as the 1970s, even an animated version touted in the 1930s, and announced at various points under directors such as John McTiernan, Jon Favreau, Robert Rodriguez and Kerry Conran of Sky Captain and the World of Tomorrow (2004). This finally emerged with the big budget, live-action production John Carter (2012) from Pixar’s Andrew Stanton, the director of Finding Nemo (2003) and Wall-E (2008), with Taylor Kitsch as John Carter, Lynn Collins as Dejah Thoris and Willem Dafoe as Tars Tarkas.

With international copyright on Burroughs’ works having expired in 2000 (fifty years after Burroughs death) and the works now in public domain, there was nothing to stop The Asylum making this adaptation of A Princess of Mars and stealing Andrew Stanton’s thunder. They also made an adaptation of Edgar Rice Burroughs’ The Land That Time Forgot (2009) the same year. (Although for all that, Edgar Rice Burroughs receives no on-screen credit anywhere in the film). Director, writer, cinematographer, editor and general one-man band Mark Atkins had directed several other of The Asylum’s films with Evil Eyes (2004), Halloween Night (2006), Allan Quatermain and the Temple of Skulls, Merlin and the War of the Dragons (2008), Dragonquest (2009), The Haunting of Winchester House (2009), Battle of Los Angeles, Sand Sharks (2011), Alien Origin (2012), Jack the Giant Killer (2013), Knight of the Dead (2013), Android Cop (2014), Dragons of Camelot (2014), P-51 Dragon Fighter (2014), A Perfect Vacation (2015), Road Wars (2015), Planet of the Sharks (2016), Empire of the Sharks (2017), Jurassic School (2017), 6-Headed Shark Attack (2018) and Monster Island (2019).

What is surprising is that, though produced on one of The Asylum’s characteristically impoverished budgets, Princess of Mars emerges as halfway reasonable. It doesn’t quite work but that is more due to reasons other than its treatment of the source material. Mark Atkins conducts some smart modern updatings of the story – rather than being a Confederate soldier in the 19th Century, John Carter is now a Special Forces operative in modern Afghanistan. As opposed to passing out in a cave and being transported to Mars through American Indian mysticism, Carter’s materialisation on Mars comes via a military experiment (although how downloading Carter’s memory into a flash drive and a medical process that combines mental projection and repairing his near fatally damaged body works makes for a decidedly baffling wave of the hand explanation). In a nod towards astronomical reality, we learn that the Mars that Carter visits is not the Mars of the Solar System but an entirely different planet that has also been named Mars.

Once arrived on Mars, however, the film follows Burroughs’ plot reasonably faithfully. We get the Green Martian Tharks, Carter’s friendship with Tars Tarkas and how he wins his way up through the ranks; his rescue of Dejah Thoris and their subsequent love; the drama over the air-pumping stations; the rendering of Carter’s superpowers, including the ability to leap great distances; even little pieces like the impropriety of referring to Dejah Thoris as “my princess”. The plotting is slightly curtailed in scope and missing the war against Zodanga that unites the Red and Green Martians, no doubt due to the film’s low budget. In its stead has been invented a bizarre plot wherein an Afghan drug lord is also translated to the planet and becomes a super-villain who sort of inhabits the minor role of the Thark traitor Sarkoja (who was a woman in the book). A few other things have been curtailed – the Tharks are green but are missing their four arms and are normal-sized instead of four metres tall. For some reason, the Martian pack animals, the Thoats, though digitally created have been rendered in approximate size but with only two instead of eight legs. Nor does Dejah Thoris come with copper skin and entirely naked as is supposed to be the Martian custom according to Burroughs.

While it is reasonably faithful to Edgar Rice Burroughs, on-screen Princess of Mars emerges as at best a routine planetary adventure. It may simply be that the approximate circumstances that served to create a classic work of adventure nearly a century ago no longer exist and the same material only translates routinely amid today’s greater sophistication of the science-fiction genre. If anything, what Princess of Mars resembles is a B-budget planetary romance of the 1980s such as Metalstorm: The Destruction of Jared-Syn (1983), Prisoners of the Lost Universe (1983), Spacehunter: Adventures in the Forbidden Zone (1983) or Gor (1987).

The major problem that Princess of Mars has is its casting. In the role of John Carter, we have male model/actor Antonio Sabato Jr, who had previously appeared as a regular on another planetary romance for tv, the underrated Earth 2 (1994-5). Sabatao, who regularly tops various Sexiest Man polls, is buffed and physically perfect for the role of John Carter. Unfortunately, Antonio Sabato holds the part in clear disdain. Surrounded by green-skinned lizard-like aliens, Sabato comes off more as a stand-up comic delivering glib quips. Placed in the Thark arena, for instance, he regales the watching audience: “What is wrong with you Tharks? Don’t you have reality tv?” When he tries to play the part seriously, Sabato comes out exactly like he were the stocky and inexpressive bodybuilder hero of an Italian peplum of the 1960s.

The other bad performance comes from Traci Lords. The former underage former porn star has eked out a minor clothed mainstream career in B-budget films of the 1990s. I cannot say I have a great liking of Traci Lords as a straight actress. She gives the perpetual impression that she is not happy with life – in fact, I do not recall any role I have seen her in where she ever cracks a smile. Cast as the bikinied warrior princess, the sour-faced Lords proves useless aside from the basic physical assets – not to mention at the age of 41 is ever-so-slightly too old for this type of role (even though she looks remarkably well preserved).

Where Princess of Mars falls down considerably is the introduction of the character of the Afghan drug dealer Sarka (Chacko Vadaketh) in the last quarter. The film never credibly establishes why the US military incarnate the same treacherous drug dealer who shot Antonio Sabato Jr. on the planet as well. In no time at all, Sarka suddenly develops evil super-villain motivations and wants to marry Dejah Thoris and conduct a stranglehold over the planet by turning off the air-purifying plants. The battling that goes on between Chacko Vadaketh and Antonio Sabato Jr. is noted for Sabato’s laughable delivery of lines like “You’re a shitty opium dealer, you’re a shitty tea seller and now you’re a shitty destroyer of the world.” The scene has to be seen for the remarkable lack of intonation with which Antonio Sabato delivers such a line. The climax of the film is also rather funny, borrowing a leaf from Total Recall (1990)’s instantaneous regeneration of planetary atmosphere.

The visual effects are better than might be expected. They are far more competent than is usually the case for The Asylum’s films. The giant spiders and Thoats are reasonably convincing. The only point the effects work shows through is Antonio Sabato Jr.’s battle with the spiderlings where the scene keeps cutting between a wide angle shot of Sabato fighting on top of it, which is obscured by dust, and a closeup, which is clearly him sitting on the back of a mock-up. The Thark makeup also looks extremely uneven – there are scenes where we can clearly see the mouth and eyes of the actors beneath the appliance.