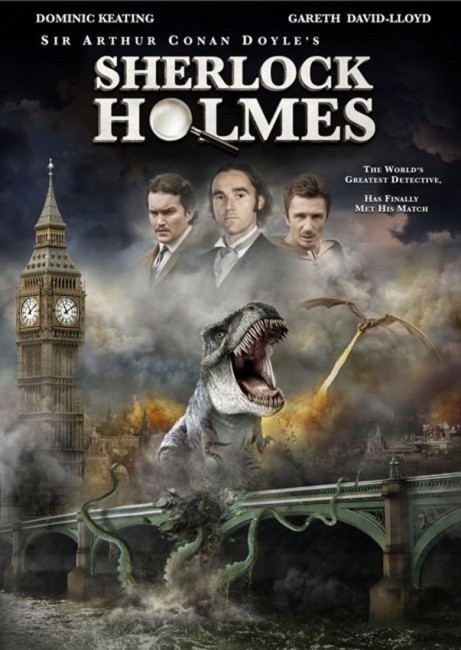 In 1940, during the London Blitz, the aging John Watson tells an incredible story to his maid Lucy Hudson. Back in 1882, he and Sherlock Holmes investigated reports of sea monsters attacking shipping and encountered dinosaurs loose in London. The trail of these led Holmes up against a criminal mastermind of surprising identity.

The US production company The Asylum had modest success after making War of the Worlds (2005), a low-budget copy of the H.G. Wells novel, which they released one day before the Steven Spielberg film hit theatres – the book was in public domain and this allowed them to sneakily capitalise on the free publicity of the bigger film, letting unsuspecting renters think they were about to watch the big-budget film.

The Asylum have also made a number of copies of works that are in public domain at the same time as other big-budget adaptations come out with the likes of Journey to the Center of the Earth (2008), 3 Musketeers (2011), Grimm’s Snow White (2012), Hansel & Gretel (2013), Jack the Giant Killer (2013),d Hercules Reborn (2014), Sleeping Beauty (2014) and King Arthur and the Knights of the Round Table (2017). In this case, Sherlock Holmes was quickly shipped out by The Asylum at the same time as the big-budget cinematically released Guy Ritchie version Sherlock Holmes (2009) starring Robert Downey Jr.

There have been a spate of what might be termed gonzo Sherlock Holmes books and stories since the 1970s – ones that pit Holmes up against everybody and everything from Count Dracula and The Phantom of the Opera to H.G. Wells’ Martian invaders and H.P. Lovecraft’s Elder Gods. Cinema hasn’t quite coined onto these as yet – apart from the adaptation of The Seven Per Cent Solution (1976) wherein Sherlock Holmes met Sigmund Freud or in having Sherlock Holmes solve the Jack the Ripper murders in Murder by Decree (1979).

Most of Sherlock Holmes here starts out as a standard mystery adventure but the latter half takes a leap off into Steampunk territory, which makes for rather interesting bedfellows. These sections of the film throw in some completely madcap elements – robots, dinosaurs, mechanical dragons, balloons with copter vanes and Dominic Keating turning up in an Iron Man-type steam power suit. It all makes for one of The Asylum’s more entertaining films, particularly during the climactic scenes.

The film’s downside is the casting of Ben Syder in the title role. Syder gives us a very subdued Holmes. He almost never taps into the one characteristic that is associated with the character – his dazzling mental agility. Indeed, in his scenes, Ben Syder gives us a Holmes who is neurotic and subdued to the point of being too polite, not one who commands a scene with his intellectual presence. At least, Dominic Keating, the film’s only recognisable name, previously a regular on tv’s Enterprise (2001-5), has a good deal of fun chewing the scenery as the villain in the latter half.

The problem in some of this must rest with the script, which is never much concerned with being a detective story or unveiling a mystery and uncovering clues by deductive reasoning – something that was always one of the central facets of the Arthur Conan Doyle stories (the same problem the Guy Ritchie film had). Of the mystery we get, it is dull and uninvolving – and many aspects, like what the dinosaur is doing inside a building, are left unexplained.

The era’s sense of period is unevenly depicted. The design work is not too bad for an Asylum film but there are a number of grating (and Americano-centric) anachronisms – references to illegal immigrants and search warrants, which did not exist as concepts back in Victorian England. The film is also somewhat cavalier-like with its interpretation of the mythos established by Arthur Conan Doyle – revealing Sherlock Holmes’s real first name as Robert, while neglecting any mention of his brother Mycroft and giving him a new brother in Dominic Keating’s Thorpe.