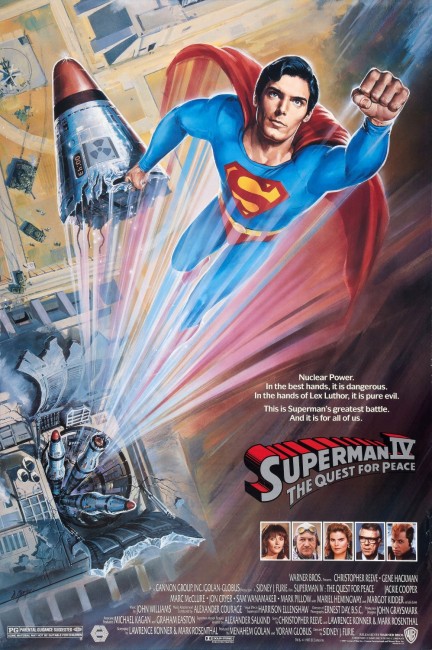 Entrepreneur Alan Warfield acquires The Daily Planet in a hostile takeover and announces that he intends to take the newspaper in more exploitative tabloid directions. Warfield’s daughter Lacy is attracted to Clark Kent’s guileless ways. When a young schoolboy writes to Superman asking him to do something about the nuclear arms race, Superman is troubled and eventually decides that it is his duty to his adopted planet to intervene. And so he gathers all the nuclear weapons in the world and throws them into the sun. However, Lex Luthor, escaped from prison with the aid of his nephew Lenny, attaches a lock of Superman’s hair to one of the missiles. This reacts in the sun to create Nuclear Man, a solar-powered creation capable of destroying Superman.

Producers Alexander and Ilya Salkind had had great success with their lavishly produced adaptations of the comic-book legend, Superman (1978) and Superman II (1980). However, with their subsequent entries in the series, Superman III (1983) and Supergirl (1984), the Salkinds’ pushed the series in a disastrously campy direction. Both Superman III and Supergirl were box-office flops. With the exception of the tv series Superboy (1988-90), the Salkinds’ then sold their interest in Superman off to Israeli-born, American-based producers Menahem Golan and Yoram Globus and their Cannon distribution chain. During the 1980s, Golan-Globus were responsible for numerous ninja, Charles Bronson and Chuck Norris action films, a host of Death Wish sequels, the terrible likes of Hercules (1983) and King Solomon’s Mines (1985), and one great film Runaway Train (1985).

Golan and Globus managed to entice Christopher Reeve back to take up the role of Superman, with Reeve agreeing so long as he had story input this time. It was Reeve who devised the film’s anti-nuclear message. Golan-Globus also persuaded Gene Hackman to come back on board as Lex Luthor once again, after Hackman had refused to return to shoot more scenes for Superman II over the Salkinds’ firing of director Richard Donner, as well as Margot Kidder, whose role in Superman III had all but been written out because she had been spoken out in the press about her disagreement over Donner’s firing. The director this time was Canadian Sidney J. Furie, who had made such films as The Ipcress File (1965) and The Entity (1982), plus two Hammer films copies, The Snake Woman (1961) and Dr Blood’s Coffin (1961) early in his career..

Superman IV: The Quest for Peace was a big flop. That said, it is not an uninteresting entry and is at least better than the previous two Salkind entries. Immediately noticeable is the dispensing with the camp elements that dogged the previous two films – with the exception of the cursory addition of Jon Cryer as Luthor’s excruciating comic relief nephew. In its place, the film attempts to tell a human story.

There are some often moving scenes like where Lois Lane tells Clark Kent of her feelings about Superman, unaware that they are one and the same person. Or the scenes where Superman stands up before the UN to say Earth is his home too and at the end of the film returns to say he has realized humanity must deal with its problems in its own time, scenes that bring a surprising maturity to the series. (The introduction of the yellow sun theory of Superman’s powers shows that the writers have been paying more respect to the comic-book).

Christopher Reeve gives another fine performance, although he is looking decidedly less than super in physique and the bumbling Clark Kent schtick gets overplayed to the point of irritation. There is a cute scene where Lois and Lacy Warfield go on a double-date with Clark and Superman. It is nice to see the comic-book being treated with respect again.

Unfortunately, Superman IV: The Quest for Peace has an equal degree of bad plotting. The film’s biggest black mark is the character of Nuclear Man. The character is the equivalent of the comic-book figure of Bizarro Superman – something the screenwriters should have gone back and studied. Mark Pillow gives a vacant muscle-headed performance as Nuclear Man. What is particularly laughable about the character is that when he comes out of the sun forged out a lock of Superman’s hair, he is not only brought to life with a cape and costume but one that is also emblazoned with the letter ‘N’. With equally indifferent regard, characters seem to have no trouble not only talking but also breathing without oxygen in space. The film also copies Superman II in throwing in a superfluous scene where Superman reveals his secret identity to Lois Lane, takes her on a flight through the skies of Metropolis, before giving her another big cop-out amnesia-inducing magic kiss, which has now become a plot device that is the superheroic equivalent of Rohypnol.

The bad plotting is matched only by the exceptionally shoddy level of effects work – Superman looks pasted onto the screen whenever he is flying. Part of the problem here is that just prior to shooting, Golan-Globus slashed the budget in half, forcing the drastic curtailing of much of the film’s scope. Furthermore, a reported 40 minutes were cut from the film following an initial preview screening. Somewhere in this, the film lost the entire character of an earlier version of Nuclear Man played by Clive Mantle. Despite its shoddy level of effects, Superman IV: The Quest for Peace, nevertheless has a conceptual ambitiousness that many of the other series entries did not in scenes with Superman unwinding twisters, plugging volcanoes, rebuilding the Great Wall of China after it is damaged by Nuclear Man and even moving the orbital path of The Moon.

The screenwriting team of Lawrence Konner and Mark Rosenthal went onto write the scripts for a number of other genre films, including the Stephen King adaptation Sometimes They Come Back (1991), Star Trek VI: The Undiscovered Country (1991), The Beverly Hillbillies (1993), the remake of Mighty Joe Young (1998), the remake of Planet of the Apes (2001) and The Sorcerer’s Apprentice (2010).

Alas, the flop of Superman IV: The Quest for Peace killed off interest in any Superman films for a few years. There were various revival attempts touted throughout the 1990s, before emerging as Bryan Singer’s Superman Returns (2006).