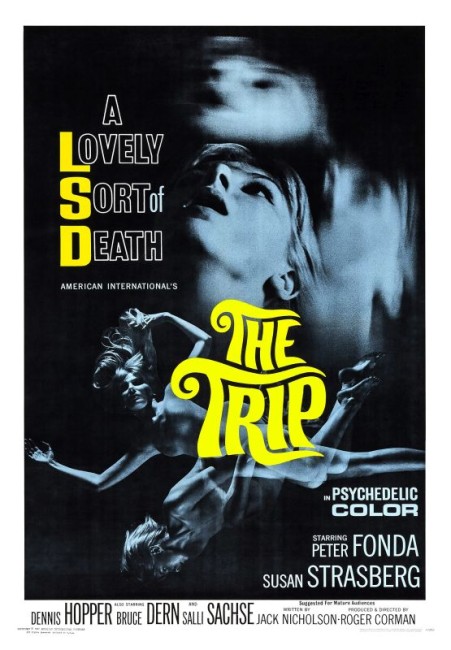 Commercials director Paul Groves decides to try an LSD trip. Under the influence, he experiences psychedelic hallucinations of making love and of being placed on trial by hooded figures. While tripping, he flees into the street, thinking he has killed his friend, and is then pursued by police.

The Trip is a genuine one of a kind. Director Roger Corman had just had a big hit with his biker film The Wild Angels (1966) and The Trip was an attempt to further exploit the youth counter-culture market he had stumbled onto. Roger Corman was not the originator of the LSD film but The Trip was the most high profile in the brief fad for LSD films during the late 1960s. (For greater detail see Films About Drug Hallucinations).

The film’s totally off-the-wall anything-goes weirdness is exactly what one might expect when one packs together under one camera such essential 1960s counter-culture cinema names as Roger Corman, Peter Fonda, Bruce Dern, Dennis Hopper, as well as Jack Nicholson (no less!) on script. Most of the group would reunite two years later for the essential 1960s counter-culture hit Easy Rider (1969).

Some of the psychedelia seems only dated lighting effects today but the rest of The Trip is a wonderful mixture of wild surrealism, cod pretentiousness and undeniable altered consciousness euphoria. The psychedelically painted interiors of Bruce Dern’s pad have to be seen to be believed. Dennis Hopper places Peter Fonda on trial for his middle-class lifestyle. We have a side trip that looks as though it has strayed in from one of Roger Corman’s Edgar Allan Poe films – the exteriors of the castle most certainly have – replete with torturers, dwarves and hooded executioners. And there are love-making sequences in psychedelic lighting – a sequence that attains a beautifully hypnotic and soothing effect.

If anything, the straight scenes are more whacked out than the hallucinatory ones. In one sequence, Peter Fonda wanders into a laundromat and starts peering into and slamming the lids of the washing machines and then suggests to a girl “Let’s communicate with our minds.” In another scene, Peter Fonda wanders into a home and encounters a little girl who asks who he is. “I’m a man,” he answers with exaggerated over-emphasis, as though he were declaring himself in front of an alien.

And then there are the sequences in Bruce Dern’s pad where the everyday achieves a genuine sense of alienation – the words ‘living room’ with emphasis on the ‘living’ seem to take on literal meaning in Peter Fonda’s mind – a chair becomes a threatening object and in one wonderful moment Fonda tries to hide in a cupboard but is driven out by the psychedelically flashing lights inside. The outright entertainment value of this helps to disguise many of the film’s shortcomings, such as Peter Fonda’s wooden acting.