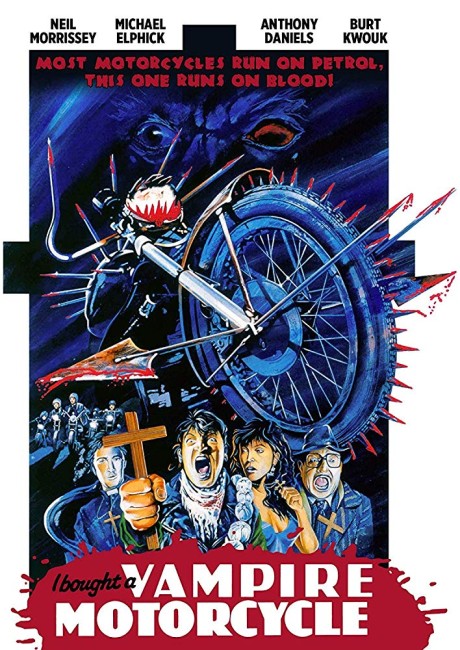 A motorcycle gang attack a group of Satanists conducting a backstreet Devil worship ceremony. In his dying gasps, the Satanist leader spills his blood into the gas tank of a Norton Commando motorcycle. Motorcycle courier Nick ‘Noddy’ Oddie subsequently purchases the Norton. He is puzzled when it refuses to go out in daylight and starts developing a mind of its own and a thirst for blood, leaving him with no other conclusion than that he has bought a vampire motorcycle.

This British jump in on the over-the-top splatter trend is a thoroughly offensive film. To which one might object is surely the point. After all both The Evil Dead (1981), Re-Animator (1985) and the entire cinema of Peter Jackson around this period – Bad Taste (1988), Meet the Feebles (1990) and Braindead/Deadalive (1992) – which the author holds candles up to, skirted bad taste and offence with equally campy outrage and tongues planted heavily in their cheeks. The almost indistinguishable difference is that I Bought a Vampire Motorcycle is a trend-jumper upon these other films. Moreover, they do what it does with far greater style and wit, while I Bought a Vampire Motorcycle is a film that has a demeaning view of its audience’s intelligence.

In concept, the idea and tongue-in-cheek approach behind I Bought a Vampire Motorcycle are fine, but by about the third vomiting and the fifth time the bike leers at Amanda Noar’s ass, the willful vulgarity starts to lapse into a passe tedium. In fact, the barrage of orders, crude references to sex and gropings that Neil Morrissey subjects Amanda Noar to become quite offensive. One scene where a turd comes to life and leaps out of a toilet bowl and down Neil Morrissey’s throat only seems crass.

There are numerous bad puns and gags – graffiti artists joking about how they need more red on the wall before a biker’s body is splattered against it, peanuts tossed in the mouth’s of severed heads – that seem to be straining to be funny. Director Dirk Campbell certainly imbues proceedings with a good deal of energy – it’s just that there is so little imagination coming in the slapstick splatter-a-body-every-five-minutes mentality that the film becomes interminably dumb.

There is little left to admire but Image Animation’s work – the moment where a nurse stands against a wall before her body topples over severed at the middle is technically brilliant but presented so coldly it seems gratuitous. The talking head and turd are fine, but like the crucifixion, the severed legs, the thigh impaling and Anthony Daniels’ severed fingers – seem rarely connected to anything.