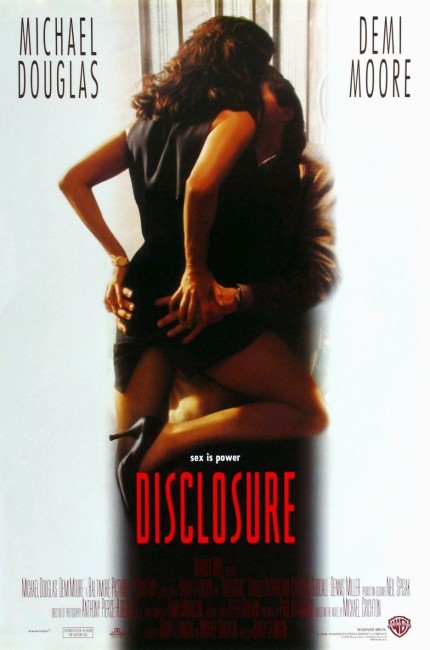 Tom Sanders, head of the Advanced Products Division at the Seattle branch of the Digicom computer firm, heads to work on the morning that a new merger is to be announced, expecting that he is going to be promoted head of the Seattle branch. Instead, he is informed that he has been passed over for the position in favour of Tom’s former lover Meredith Johnson. That evening, Meredith invites Tom up to her office to discuss work and then wants him to have sex. However, the married Tom pulls away from her embrace. The next day, Tom comes to work to learn that Meredith is contemplating pressing a sexual harassment suit against him. He responds by launching his own suit against her. He then discovers that his privileges at Digicom have been cancelled and that nobody in the firm will help him. As he starts to dig deeper, Tom finds that behind the charges are things that Meredith and the firm want to keep covered up.

Michael Crichton emerged as a novelist in the late 1960s. He became a best-selling author and then a film director. Crichton was at a peak in the 1970s with films such as The Andromeda Strain (1971), Westworld (1973), The Terminal Man (1974) and Coma (1978). However, interest in Michael Crichton’s brand of techno-phobic alarmism began to falter in the 1980s and he retired as a director in 1989. That was until the mega-success of Jurassic Park (1993), adapted from Crichton’s book. Michael Crichton’s name was suddenly back in vogue all over again and the rights to all of his books instantly snapped up.

This adaptation of Michael Crichton’s 1993 novel was made by Barry Levinson, the celebrated director of the likes of Diner (1982), Good Morning Vietnam (1987), Rain Man (1988) and Bugsy (1991). Barry Levinson has also made various other genre films, including Young Sherlock Holmes (1985), the delightful offbeat fairytale Toys (1992), the Found Footage ecological catastrophe film The Bay (2012), while he would later return to Michael Crichton in his adaptation of Sphere (1998) about the discovery of a UFO.

There was a strongly conservative element to Michael Crichton’s writing. The book version of Rising Sun (1991) argues that Japanese business practice is a direct threat to the American economy in terms that are blatantly racist, while State of Fear (2004) ardently argues that Global Warming is not merely questionable science but a conspiracy created by environmentalist groups thinly modelled on Greenpeace. This adaptation of Disclosure, which Crichton claims that he based on an experience of a friend, came mired in controversy and was accused of contributing to the male backlash against feminism. A large part of the controversy is that Disclosure features a man suing a woman for sexual harassment. (The same year also saw David Mamet’s Oleanna (1994) taking up very similar issues.

It is significant that the only film to have been made about workplace sexual harassment up until North Country (2005) a decade later is one that paints the female as a predatory aggressor – a situation that in reality is overwhelmingly rare in comparison to the male harassment of women). Secondly, Disclosure accrued controversy for its steamy sex scenes – although for once this is steamy sex whose reputation exists more in regard to what is being talked about than what is shown (there is a complete absence of nudity, for instance).

One is not entirely sure whereabouts on the political spectrum the film of Disclosure sits. It is undeniably part of the male backlash. If there is any doubt about that then the casting of Michael Douglas, who became a poster-boy for the politically incorrect in films such as Fatal Attraction (1987), Basic Instinct (1992) and Falling Down (1993), would. (Both Fatal Attraction and Basic Instinct are perhaps the most prominent of the male backlash films). Throughout both the book and film of Disclosure, the character of Meredith is painted as sexually aggressive, therefore dangerous. Sexual aggression is about the only motivation she is ever given in the film, while her motivations in regard to the thriller aspect of the story are kept murky; rather the film sees her as all-embracingly evil and sees no need to write her any greater depth than that. Certainly, the usually bland Demi Moore gives a performance that in its assertiveness manages to hold attention when she is on screen, never more so than the scenes in the courtroom where she refuses to apologise for being someone who likes sex aggressively.

Despite the apparent Political Incorrectness of Disclosure, the script goes some way to try and redress matters – more so than Michael Crichton did in the book. The giving of the job to the Stephanie Kaplan character at the end amidst much talk of the best person for the job – a piece added over the book – comes as a hopeful attempt to right matters. Roma Maffia’s lawyer gets an intriguing offhand line about how she met her husband after he asked her out at work, “These days he’d need the UN to negotiate any further.” There is a telling and interesting piece in a scene – invented over the book – where Michael Douglas’s wife Caroline Goodall quietly argues that she has suffered harassment in the workplace too but has learned to ignore it and why should it only be important when it suddenly happens to him. One particularly good addition is the scene where Michael Douglas’s secretary Jacqueline Kim is placed on the stand and her innocently honest comments about his casual touches are brutally hounded and turned around to make it seem that he is a sexually harassing monster.

All the controversy surrounding the issues in the film tended to obscure what Disclosure is actually about. Once past the steamy sex and the haggling over the issues in the courtroom, Disclosure becomes a different type of story altogether – a corporate thriller. If anything, Disclosure gives the appearance of the sexual harassment having been designed as a sensationalistic selling angle. In the book, once past the actual issue, Michael Crichton appeared to become completely disinterested in the resolution of the harassment case.

While the film does cop out on following up the political storm it raises, it does segue into a reasonably gratifying thriller. The courtroom sequences maintain an excellent suspenseful edge. Particularly good are the scenes in the Virtual Reality net, which hold something genuinely science-fictional and frightening in the image of a blank digitised block with Demi Moore’s head on it advancing to eliminate files. Try as he might, Michael Crichton appears unable not to get back to his fascination with technology – even Crichton’s one other non-sf book-become-film, the equally controversial Rising Sun (1993), contains a strong element of experimental cutting edge technology.

Disclosure could be counted as one of the few worthwhile screen adaptations of a book. (Throughout the 1990s, Michael Crichton tended to write his books as virtual screen treatments). The script nips and tucks a few pieces here and there. What is most missed is some of the motivation – it is not clear why the company is backing Meredith as opposed to Sanders and why they continue to back her when she is clearly proven to be in the wrong. All mention of her affair with Garvin from the book has been dropped and as a result the ending lacks the upbeat satisfaction it should – Kaplan is appointed the new exec but Garvin’s corruption has not been excised. On the whole though, the film tightens the book extremely well, dropping many elements that are not needed, such as the sensation-seeking tv journalist. Paul Attanasio’s script actually improves on Michael Crichton in many areas. Crichton’s characters almost entirely tend toward the wooden, whereas Paul Attanasio delivers some wonderfully snappy dialogue that makes the script positively sing.

Michael Crichton’s other film adaptations include:- The Andromeda Strain (1971) about an extra-terrestrial virus; the neurosurgical Frankenstein film The Terminal Man (1974); Jurassic Park (1993); Rising Sun (1993), an adaptation of Crichton’s book about Japanese business practice; the lost world film Congo (1995); The Lost World: Jurassic Park (1997); Barry Levinson’s underrated Sphere (1998) about the investigation of a crashed UFO; John McTiernan’s The 13th Warrior (1999), an historical epic about the meeting between Vikings and Neanderthals; Richard Donner’s dull adaptation of Crichton’s Timeline (2003) about time travel to Mediaeval France; the tv mini-series remake of The Andromeda Strain (2008); and the tv series remake of Westworld (2016– ). Michael Crichton’s films as director include:– Westworld (1973) about an android amusement park that goes amok; the medical thriller Coma (1978); The Great Train Robbery (1979) about a Victorian train heist; Looker (1981) about virtual models; Runaway (1984) about a police force to stop amok robots; and the courtroom thriller Physical Evidence (1989). Crichton also created the hit hospital drama ER (1996-2009) and wrote the original screenplay for Twister (1996) about tornado chasers.

(Winner for Best Actress (Demi Moore) at this site’s Best of 1994 Awards).