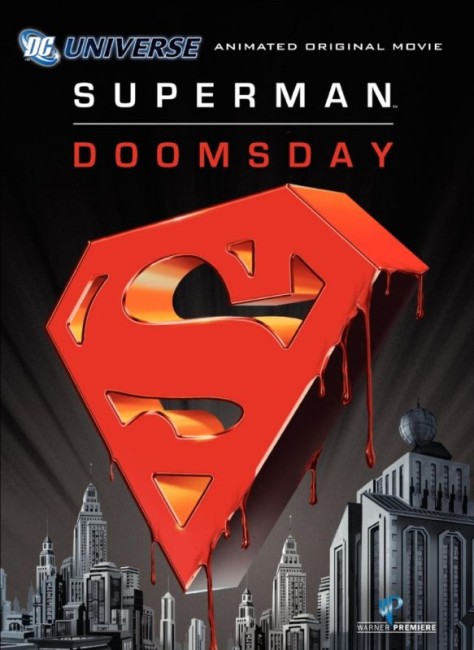 Employees of Lexcorp are drilling two miles underground to create a lair for Lex Luthor that is free from Superman’s view when they uncover a vault of alien origin. As they attempt to ascertain what is inside the vault, a monstrous creature smashes its way out and begins rampaging through Metropolis. It destroys everything in its path and is unaffected by any weaponry brought against it. From Kryptonian archives, Superman discovers that this is Doomsday, a creature that was artificially created as a near-invincible soldier but was buried because it was unable to distinguish between friend and foe. Superman tackles Doomsday in a massive battle that ends up killing both of them. There is worldwide mourning for the death of Superman. Not long after, Superman reappears over Metropolis and seems to be about business as usual. Lois Lane finds him distant and she and Martha Kent are suspicious about the continuing absence of Clark. This is in fact a clone of Superman created by Lex Luthor, one that he has designed to be compliant to his will. However, the revived Superman is much harsher than the old one, even willing to kill criminals. The populace of Metropolis begin to fear him. The real Superman’s body is in a recuperative coma, having been removed from his grave and taken to the Fortress of Solitude by his robot servant. Returning to consciousness, Superman sets out to stop the clone but this means having to fight against himself with his powers not at full strength.

Producer Bruce Timm gained a considerable following with the animated tv series Batman (1992-4). Batman came directly modelled on the look of the Tim Burton Batman films and was one of the finest and most innovative animated series ever made. Stories were written to an adult level and readily delved into the dark, brooding places where the modern Batman comic-book dwelt. Bruce Timm and co then went onto adapt Batman’s DC stablemate Superman into an equally fine animated series Superman (1996-2000). Various of the creative team went onto make the original futuristic Batman Beyond/Batman of the Future (1999-2001) and other DC Comics adapted animated series such as Justice League/Justice League Unlimited (2001-5), Teen Titans (2003), Krypto the Superdog (2005) and Green Lantern: The Animated Series (2011-3). In between these, Timm and co had begun a series of Batman films with Batman: Mask of the Phantasm (1993), Batman and Mr Freeze: Sub Zero (1997), The Batman Superman Movie: World’s Finest (1998), Batman Beyond: Return of the Joker (2000) and Batman: Mystery of the Batwoman (2003). Amid these, there had been two animated Superman movies – Superman: The Last Son of Krypton (1996), a compilation of the three-part pilot episode for the series, and the original DVD release Superman: Brainiac Attacks (2006).

Superman: Doomsday is the third-and-a-half animated Superman film (the half if one counts Superman’s appearance in The Batman Superman Movie) and the first of Bruce Timm’s films to be based on an actual storyline in a DC comic-book. In this case, Bruce Timm and company have adapted The Death of Superman story arc that played out over a year between 1992 and 1993. The storyline featured Superman’s death at the hands of genetically engineered Kryptonian killing machine known as Doomsday and the worldwide grief that followed. The subsequent storyline had Superman’s absence filled by four pretenders – a cyborg copy of Superman; an alien villain known as The Eradicator who had formed itself into a copy of Superman; the weapons designer John Henry Irons aka Steel, who later became a regular DC superhero and even appeared in his own live-action film with Steel (1997); and a cloned version of Superman known as Superboy. The Death of Superman was a massive success – the No. 1 best-selling title of the 1990s. It wrought considerable change in the way DC dealt with superheroes – within the space of a year, Batman suffered a fatal back injury and various other characters underwent killing/revival/abrupt life changes to the point that this became a cliche referred to as a Comic-Book Event.

During this time, there were efforts made to adapt The Death of Superman into a film version to be called Superman Lives. Kevin Smith worked on the script of this version – in fact, Smith appears here in a two-line voice cameo, making scathing comments about Superman destroying a mechanical spider (one of the notorious changes that producer Jon Peters tried to force into his script). A full account of the Tim Burton-Nicolas Cage Superman Lives can be found in the documentary The Death of “Superman Lives”: What Happened? (2015). Doomsday and a condensed version of The Death of Superman was subsequently incorporated into Batman V Superman: Dawn of Justice (2016), while the animated series later redid the story as the two-parter The Death of Superman (2018) and Reign of the Supermen (2019).

The joy of many of Bruce Timm’s animated series (particularly Superman) is always their massively scaled superheroic battles. Part of the reason that Timm took on Superman: Doomsday, one suspects, is the opportunity to go wild in terms of superheroic action. Much of the film has been construed around two major sequences – the battle with Doomsday and the climactic battle against Dark Superman. The Doomsday battle is a massively exciting set-piece – with the two cannoning through office blocks and out the other side as they fight, pounding one another into the pavement, Doomsday falling down through every level of a skyscraper, and finally Superman dragging Doomsday up into orbit, the two falling and creating a massive crater as they impact into the ground. The climactic battle between the two Supermen with them using power punches that send shockwaves, blasting one another with their heat vision, more smashing through buildings, even attempting to batter each another using a boat, is an exhilarating show capper.

Superman: Doomsday follows the story arc of The Death of Superman – of Superman’s death at the hands of Doomsday, the whole world’s grief and then the arrival of an impostor(s) – albeit in a condensed way. Timm and co do differ notably from The Death of Superman storyline on a number of points – Dark Superman was not one of the Superman impostors in the comic-book storyline, although seems to have been composited from the attributes of some of the other characters; while various other DC superheroes who were engaged in battling Doomsday are also absent.

The film does retain many other small details – Superman’s solar suit, his return with long hair, the scenes where he reveals his identity to Lois Lane. Certainly, the story arc is there in its essence and it works fine on screen and with a suitably mythic size to the story. One is kept intrigued by the mysteries of the script, wondering what exactly is going on with the Superman duplicate and what happened to Superman’s body. The script questions what a world without Superman would be like (as the comic-book series did), he being seen as representing an ideal of good in the world, with Perry White even going so far as to comment how it is possible to lose a moral grip without Superman there as a symbol.

Bruce Timm and co abandon the Art Deco look of the animated tv series. Superman still gets his jutting larger-than-life jawline and physique but Metropolis is less stylised and much more realistically detailed. The degree of background detail that has gone into Superman: Doomsday is also much richer than in the series and other films (excepting perhaps Batman: Gotham Knight) and the animation much more vibrant. Superman: Doomsday also has a more adult tone than any of the previous DC animated works – it was released in the US with a PG-13 rating – it is directly implied that Superman and Lois have slept together at the Fortress of Solitude, Doomsday tears the heads off soldiers, Lex Luthor shoots one of his employees (in a beautifully stylish silhouetted slow-motion shot), while Lexcorp employees crack jokes about shoving industrial pumps up Luthor’s rectum.

Amid the voice cast, Adam Baldwin makes an acceptable stand-in for Tim Daly who voiced Superman/Clark Kent through the tv series and Brainiac Attacks. (In fact, there do not appear to be any voice actors in the film who were also present in the original tv series). The piece of recasting that does not work is that of Anne Heche as Lois Lane. Dana Delany was perfect as Lois in the tv series (and also Brainiac Attacks) where she played the part with a tough sass. On the other hand, Anne Heche gives Lois a Midwestern drawl that makes the part sound much more like an older woman and not at all what one imagines Lois to be. James Marsters voices Lex Luthor, which is adequate but one misses Clancy Brown’s wonderful basso voicing of the role from the tv series.