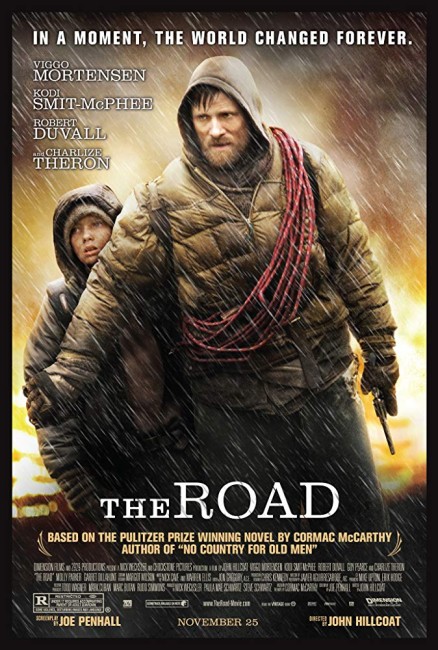 A holocaust has destroyed most of the world. Civilisation lies in ruins and nothing grows anymore. A man and his young son struggle across the devastated landscape, pushing their belongings in a shopping trolley, hoping to get to the coast. It is almost impossible to find any food. Life on the road is dangerous as they try to avoid gangs and marauders who will kill just for something to eat. Worse are those that have fallen into cannibalism and kill other people to eat their flesh.

It is almost certain that The Road was greenlit around about the day after the Coen Brothers’ No Country for Old Men (2007) won that year’s Academy Award for Best Picture, along with a host of other awards. No Country for Old Men was adapted from a 2005 novel by Cormac McCarthy. And still buzzing in people’s ears at the time No Country for Old Men came out was the praise heaped on Cormac McCarthy’s then most recent novel The Road (2006). The Road received some extraordinarily glowing reviews, including winning the Pulitzer Prize for Literature that year. All of this served to suddenly provoke great interest in the works of Cormac McCarthy with several other planned film adaptations of his works having also been announced with the only to emerge so far having been McCarthy’s original screenplay for The Counselor (2013) directed by Ridley Scott and James Franco’s adaptation of Child of God (2013) about a necrophile serial killer.

Cormac McCarthy has been writing since the 1960s – he is now in his mid-70s. The majority of his work has been Westerns. His crowning achievement is Blood Meridian, or the Evening Redness in the West (1985), an extraordinarily nihilistic Western that is drenched in grim violence (and frequently borders on horror). It shocked many at the time but the book is now hailed as one of the great literary works of the 20th Century.

What took everybody’s breath away with The Road was the sheer poetry of Cormac McCarthy’s writing, the terseness of the prose and the evocative imagery of desolation. The way that McCarthy turns phrases, paints images of the end of the world and illustrates the slow death of hope in the unnamed protagonist’s heart is truly extraordinary. The novel reminds of British artist Joseph Turner, especially his paintings of the fires of Parliament – scenes in which the human figures are rendered indistinct and all that remains is a vast seething cauldron of impressionistic landscape. (The book never explains what caused the apocalypse, nor even grants any of the characters that appear throughout names).

The film version of The Road has been placed into the hands of Australian director John Hillcoat. Hillcoat has only made three films before – Ghosts … of the Civil Dead (1988), a brutal and harrowing depiction of life inside a maximum security prison; the little seen contemporary relationship drama To Have and To Hold (1996); and the excellent The Proposition (2005), a harsh and disturbing Western set in the 19th Century Australia (that comes from a script by musician Nick Cave who has worked in various capacities on all of John Hillcoat’s films). Subsequently, Hillcoat went onto make the non-genre likes of the Depression Era bootlegging drama Lawless (2012) and the heist film Triple 9 (2016).

The Road goes out into general US release only two weeks after Roland Emmerich’s mega-budgeted 2012 (2009). I mention this because of the marked contrast between the two. Both films are variants on a theme – the end of the world – but exist at entirely opposing extremes. 2012 is drunk with spectacle, serving up mass destruction to thrill and amaze us. Human life seems of little importance – people die, effort is made to save them, but the details are not dwelt on (certainly you never feel any tragic loss as anybody is killed while you are watching 2012). Moreover, no thought whatsoever is spared to those who do not survive – at the end, it could be as though they have been erased from memory as well.

The Road stands at 180 degrees remove from all of this. It has no interest in spectacle to the point that the disaster itself is not even specified or depicted beyond the glow of fires outside a window. Where Roland Emmerich seems unconcerned for anybody who was wiped out in the disaster, The Road is all about painting a human face on that. While Emmerich trades in big cliches like passover and survival for those he nominates as heroes, The Road takes place in a world where all notions of heroism and decency have been obliterated, where it is a struggle for Viggo Mortensen to try and maintain a semblance of humanity. In contrast to Emmerich’s spectacle, The Road inhabits a grey, desolate world where humanity is reduced to pushing shopping carts in the ashes of civilization and scrabbling to eat bugs. It paints a grim human picture of what is left of the world and inside humanity after all the marvellous wow-inducing mass devastation has hit. As such, The Road is surely the anathema to the modern Disaster Porn cycle – indeed it is the perfect anti-box office movie.

There have been numerous post-holocaust films before. It is important to see The Road in contrast to these. The success of Mad Max 2 (1981) created a fad during the early 1980s for post-holocaust action films with people dressed in ragged punk fashions driving ramshackle vehicles in crazed demolition derbies. They were essentially Westerns in science-fiction drag that took place in a world of tough survivalism where the helpless and dispossessed could at least rely on a tight-lipped loner hero to ride in, save the day and vanquish the clearcut bad guys. The Road goes far beyond that where heroism is no more than a vague mantra about keeping the fire in the heart that the man tries to impart to the boy. Nor is there anything here akin to films like Damnation Alley (1977) and I Am Legend (2007) where the trek across the post-holocaust wasteland is eventually rewarded with an absurdly upbeat ending as survivors arrive at some remaining pocket of untouched civilisation.

There were earlier works like Panic in Year Zero! (1962) about brutal survivalism in the aftermath of a nuclear strike, although that advocated harsh self-first survival attitudes, and the British tv series Survivors (1975-7), which dealt well with issues of survivalism, although that fell more into the John Wyndham vein of rustic utopianism. To find something that The Road compares to you might have to go to the bleak British nuclear war mockumentary The War Game (1965), or else the emotionally shattering anime Barefoot Gen (1983) with children trying to survive in the aftermath of Hiroshima. These are works that emasculate hope, reduce the survivors to shell-shocked and hungry people trying to pick their way across the ruins of a world that has been obliterated and only ash and rubble left. What these and The Road say is that the end is not an opportunity for car derbies and heroes to find their place, but a grim world where all trace of civilised certainty has vanished in an instant.

John Hillcoat does a fine job of translating Cormac McCarthy’s novel to the screen. All of the detail is drawn from the book, there are no embellishments for the sake of creating drama or the pumping up of scenes to create more action. The film keeps with McCarthy’s convention of not specifying the names of the characters, the areas they are passing through or even the cause of the holocaust. The film exists, just as the story did for Cormac McCarthy, as one where the desolate and ruined landscape is the most prominent character in the book and the journey taken along the titular road is less anything to do with the incidents the characters encounter than it is about the subtle moral erosion that goes on in their heads. The result in both book and film is less about telling a story than it is a poem of desolation.

John Hillcoat’s visuals do an excellent job of illustrating the landscapes that Cormac McCarthy describes – Viggo Mortensen and Kodi Smit-McPhee pushing their shopping cart across a horizon line covered with vast fires; walking down highways of toppled power lines; entering abandoned buildings and kicking through the strewn litter of useless money; where ships have been bizarrely stranded atop freeways. Everything is covered in ash – indeed, all colour is bled out of the frame to a uniform grey where the only brightness is the flames or Viggo Mortensen’s flashbacks to life with Charlize Theron. It is here that the film succeeds in tapping an author’s voice superbly.

Viggo Mortensen does a fine job of looking gaunt and showing us the slow draining away of his humanity, while young Kodi Smit-McPhee is excellent counterpoint to him. As Cormac McCarthy did, John Hillcoat lets the bulk of the story be the relationship between the two – the contrast of Viggo’s increasingly harsh survivalism and abandonment of the past, balanced out by the boy who is constantly reminding him of basic human decency.

On the other hand, though all concerned try their utmost, the film is one that necessarily never fully conveys the extraordinary poetry that Cormac McCarthy did. It is not a betrayal of the novel, just one where the difference in mediums means that the author’s voice loses much of its impact. Enjoy the film but regard it more as a primer to go and track down the novel and then be completely floored.