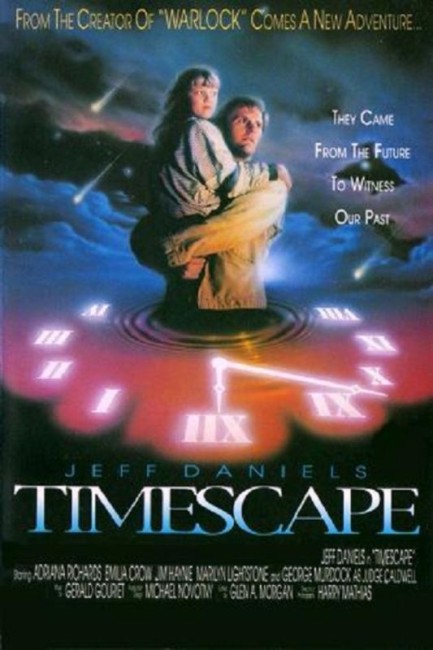 aka The Grand Tour; Disaster in Time

Ben Wilson, a builder in Greenglen, Illinois, has sunken into alcoholism following the death of his wife. He has bought and is renovating a hotel with the help of his daughter Hilary. They receive a visit from a tour guide who offers whatever price they name if a party of nine can lodge there despite the fact the hotel is in disrepair. Ben agrees but soon finds odd things about the group. He then makes the discovery that they come from the future and are in fact tourists who travel through time, viewing the great disasters of history. The town is then suddenly devastated as it is hit by a meteor, although they are spared because the hotel is above the main township. This is followed by an explosion of the school boiler, in which Hilary is killed. As the party departs, one of the group sneaks Ben one of their time travel passports and he makes the decision to go back 48 hours in time to warn the townspeople and save Hilary.

Despite poor distribution treatment, Timescape is a surprisingly good film. David Twohy brings a maturity of themes to the run of time travel films that had begun with the likes of The Terminator (1984) and Back to the Future (1985). He does perhaps develop things a little too hurriedly – the principal revelation about the tourists being time travellers comes without much build-up and almost none of the usual puzzling over odd behaviour. Similarly, the disaster occurs without much drama – there is far more drama afforded to the explosion of the boiler that occurs later on. Possibly part of the reason for this is the low budget, which appears to not have been enough to allow any widescale depiction of the disaster – the only ruins we see, for instance, is a single set of part of the devastated main street.

It is almost as though Twohy is impatient to hurry to cut to the chase of the plot. Certainly, when he does get to where he wants the film to go, the production takes a major leap forward. The scenes with the two Jeff Daniels’ arguing with one another and particularly the scene in the jail cell where the future Daniels tries to explain to his present self what is happening, are scenes that start at last to show just what the cinematic time travel genre can be capable of.

There is one great shot focused on a doorway as the Oscar character passes through to investigate the flicker of the lamp and a moment later Jeff Daniels appears, coming through the doorway from the other direction and we realise that the doorway, which had previously been buzzsawed through by Daniels, is now whole again and that he has succeeded in travelling back in time – all in the space of one shot. It is a purely science-fictional shot – going back the space of a day without the camera even moving – that almost matches the bone-into-spaceship shot in 2001: A Space Odyssey (1968) for visual audacity.

The film has its occasional moments of hokiness – like the bit about time travel being conducted by having the date stamped on the passport. Also the ending where the tour supervisor comes to take the future Jeff Daniels ‘back to tomorrow’ does not make sense – his tomorrow would no longer exist and surely Daniels would object to being returned to a timeline that he has just fought to change. Or if it is meant that he is merely being taken into the next day on the same timeline, which is surely pointless as his present self would also be there.

Despite such minor quibbles, Timescape represents a strong and mature handling of time travel themes. One of the overriding motifs in the current run of time travel movies is about how to change the past on a personal level for the better – and the film predictably ends with the feelgood suggestion that Jeff Daniels has brought his wife back from the dead.

Jeff Daniels is always a performer who suggests that he can do better than the material he is stuck in – he seems to get cast as a hapless schmuck in light comedy – and then there is the likes of Dumb and Dumber (1994). The best performer in the film is Ariana Richards, later to appear in Jurassic Park (1993), who is an intelligent, warm and very adult performer who should have made far more films than she did.