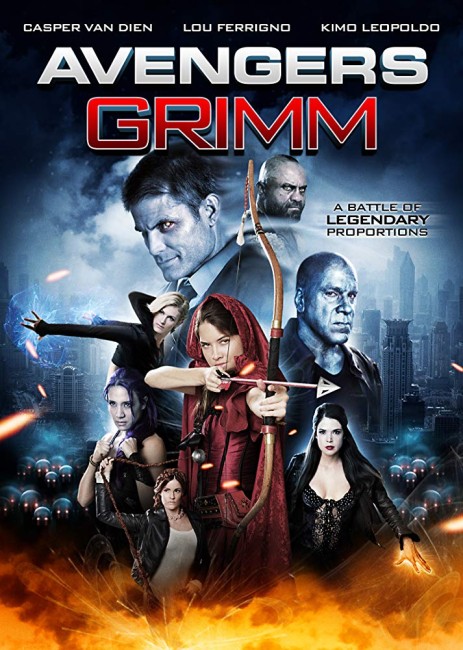 Avengers Grimm was The Asylum’s response to the release of Marvel’s Avengers: Age of Ultron (2015). The way they have gone with this one has as much ingenuity as it does cheekiness. Though The Asylum have had a prolific output of films in the last decade, there isn’t much there that they could build an ensemble out of – unless you wanted to consider some Godzilla vs ___’ type monster bash featuring their various Mega Shark, Sharknado and Multi-Headed Shark Attack creatures. There simply isn’t a roster of superheroes (or any other types of notable heroic figures) for them to work with.

Instead, in their ingenuity, The Asylum have turned to their various fairytale adaptations – of which they have conducted quite a number in recent years with the likes of Grimm’s Snow White (2012), Hansel & Gretel (2013), Jack the Giant Killer (2013), Sleeping Beauty (2014), Hansel vs Gretel (2015) – and brought together the fairytale princesses as a kickass team and given them superpowers. The nearest Avengers Grimm gets to Marvel’s The Avengers is the casting of Lou Ferrigno, who played The Hulk in tv’s The Incredible Hulk (1977-81), who is covered in grey bodypaint and plays a character who undergoes a Hulk-alike transformation.

The idea sounds fantastic. Alas, being The Asylum, Avengers Grimm is made as cheaply as possible and the actuality is miserable. The five girls the film features as the respective fairytale princesses are all minimally talented starlets you have never heard of before – their sole ability is to parade around in tightly clad outfits, engage in some mild kickassery and project sarcastic attitude – it is hard to think of anything that might be further away from say a Disney fairytale princess than that. (It seems appropriate that their first thing upon arriving in the present-day world is not any kind of cultural shock but the question of where to get hot-looking outfits). The girls frequently engage in indifferently directed and staged fight scenes, accompanied by some tatty animated magic effects. Equally Casper Van Dien, the most well-known name present, plays Rumpelstiltskin as a slick businessman/super-villain – it feels almost impossible to close your eyes and think of this same character as the wizened dwarf figure that Rumpelstiltskin is usually portrayed as.

The idea makes for a great concept but there is no cleverness in the playing. It could have been amusing – a parody, a deflation or something wryly meta-textural but it is just a bunch of bad actresses displaying the most minimal engagement with the exercise pretending to kick about some stunt people. The other thing is that the concept is stretched. To make the film work as an Avengers ripoff, the film has to invent a bunch of superpowers for the princesses – none of which they are associated with in their customary incarnations. Little Red Riding Hood fires a mean bow and arrow; Cinderella for some reason has the ability to deliver cold blasts from her fingertips and produce icicles from her wrists that act as daggers. The most absurd of these is when Rapunzel goes into action swinging her plaited hair as a weapon to whack people with.