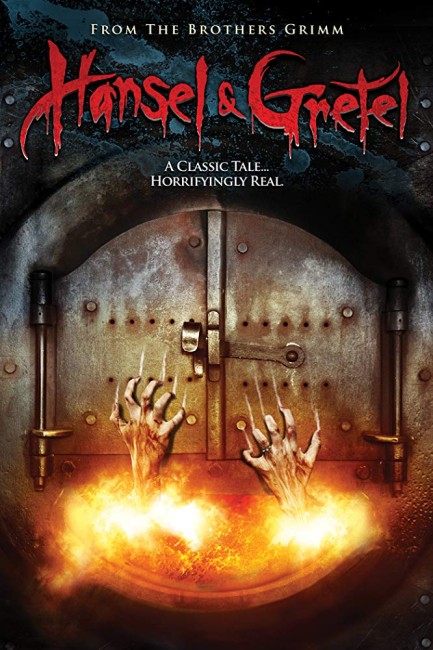 In small town of Kendlewood, Gretel Grimm works at The Gingerbread House, a bakery run by Lilith. That evening, Gretel’s father announces to Gretel and her brother Hansel that he is going to marry Ruby and is intending to sell up the family house so that they can go travelling. Hansel, a stay-at-home slacker, melts down at the thought of having to move out and runs into the woods. Gretel runs after him and finds Hansel having twisted his ankle. The two seek refuge at a nearby house in the woods, which turns out to be owned by Lilith. She welcomes them in but in the morning, they discover that they have been made prisoners. They are placed with several other missing people that Lilith and her two brutish sons keep chained up in the basement, fattening them up so that their flesh can be used in Lilith’s special meat pies.

The early 2000s saw a spate of theatrically released adult fairytale adaptations with the likes of Red Riding Hood (2011), Mirror Mirror (2012), Snow White and the Huntsman (2012), Jack the Giant Slayer (2013) and Maleficent (2014). With the original stories in public domain, The Asylum readily leapt aboard and offered up their own cheap copies with the likes of Grimm’s Snow White (2012), Jack the Giant Killer (2013), Sleeping Beauty (2014) and Little Dead Rotting Hood (2016).

Hansel & Gretel was another mockbuster released at the same time as the theatrically-released Hansel & Gretel: Witch Hunters (2013). It promptly becomes the best of The Asylum’s low-budget modernised fairytales. While their other fairytale adaptations were all over the map attempting to find some cheap modern equivalent of the story, this sticks to the basics and essentially gives us Hansel and Gretel by way of The Texas Chain Saw Massacre (1974). Some of the film’s modern interpolations are amusing – like the opening scenes that recast Hansel as a live-in-his-room videogame junkie who runs off into the woods after having a meltdown upon learning that his father is going to sell the family home.

Anthony C. Ferrante was also the director of The Asylum hit Sharknado (2013), which was released seven months later the same year as this. Ferrante goes for horror movie effect with highly entertaining regard. The influence of Texas Chain Saw is clearly evident in the scenes with Dee Wallace’s two hulking imbecilic sons and a not dissimilar design scheme for the insides of the house. The film is filled with various scenes where the imprisoned victims are chained and manacled up, cut to pieces, where Stephanie Greco is imprisoned inside a bag or with various girls being tied up in their underwear and threatened. The most entertaining scenes are the ones where Hansel (Brent Lydic) gets Lilith’s candies all over his skin, starts eating them and finds them so delicious that he starts eating the flesh they are stuck to and then tearing out his intestines. At the same time, Sara E. Fletcher is trapped in a room of razor wire that slices her skin and body parts off every way she turns.

The film’s ace is Dee Wallace, a genre regular who was cast in mom roles ever since E.T. – The Extra-Terrestrial (1982) and more recently grandmother parts. Wallace takes the opportunity to pulls all stops out and go completely nuts in the role – all considerably to the film’s entertainment value. Not to mention that she gets assorted scenes shoving pitchforks and machetes into victims and bashing heads in with rolling pins.

The Asylum made a sequel with Hansel vs Gretel (2015) where the only returnee was Brent Lyric as Gretel.