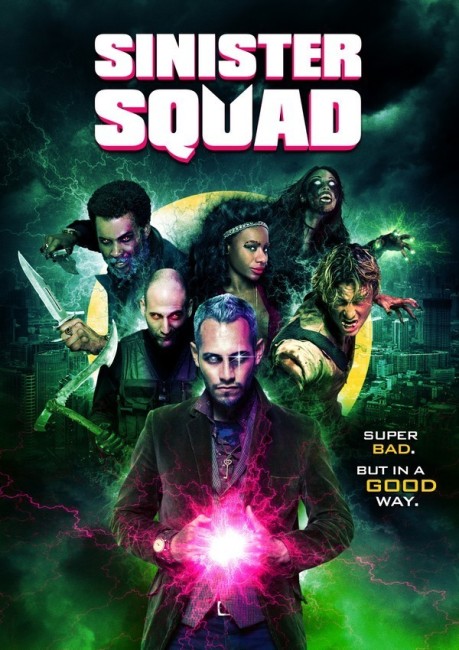 The Asylum also enjoyed some success in the early 2010s with their various fairytale adaptations, including Grimm’s Snow White (2012), Hansel & Gretel (2013), Jack the Giant Killer (2013), Sleeping Beauty (2014) and Hansel vs Gretel (2015), most of which came out on the back of high-profile Hollywood retellings. In time for Marvel’s Avengers: Age of Ultron (2005), they released Avengers Grimm (2005), featuring a team-up of characters from various fairytales. Sinister Squad is a loose sequel to Avengers Grimm and features a team made up of fairytale villains. It was similarly released in time to capitalise on DC’s super-villain team-up film Suicide Squad (2016). This was followed by a further sequel Avengers Grimm: Time Wars (2018).

Sinister Squad comes from Jeremy M. Imman who also made Avengers Grimm and plummets to a similar level of near-unwatchability. As in Avengers Grimm, Imman throws most of the customary fairytale characterisations up in the air and plays mix and match with them. Traditionally, Bluebeard is no more than a wife murderer who kills his wives after they annoy him and then keeps their bodies preserved; here he has become a supernatural serial killer who keeps the souls of his murdered victims in his knives, referring to them as his wives. The Pied Piper’s pipe has developed a handy ability to fire blowdarts. Both Rumpelstiltskin and the Wicked Witch seem to have now developed mind control powers.

Equally, you would not recognise Alice in Wonderland (who is strictly not a fairytale character), played by one of the film’s no-name actresses who is well into her thirties with an incredibly fake British accent. Or else Goldilocks who gets to charge into battle at the climax with a gun in either hand.

The film is shot contemporary – and even there most of the action seems to take place in a warehouse – with a vague explanation about how Rumpelstiltskin’s meddling has changed reality. It is very confusing trying to follow what is actually going on. The plot seems to involve Death having been unleashed, although it is not clear what Death is up to, while some members of the team are also conspiring with Death for their own ends. All of the no-name actors, men and women alike, use the opportunity to campily posture with complete abandon.