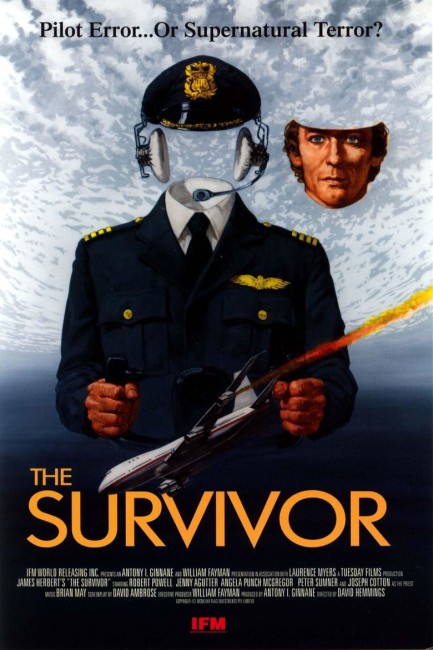 Airline pilot David Keller walks away, the sole survivor of a plane crash that killed everybody else aboard. He is unable to remember what happened. Soon though, he and the people around him are haunted by mysterious happenings.

James Herbert (1943-2013) was a British horror writer of dubious literary capability. What Herbert does have is an enormous ability when it comes to the depiction of graphic dismemberment. His stories are worth reading not for their plots, which are only routine variations on classic horror themes but for their alternately interspersed chapters, each delving into the unbelievably sordid life of a victim who at the end of the chapter becomes mutilated by the resident menace. James Herbert’s books include the likes of The Rats (1974), The Fog (1975), The Spear (1978), The Dark (1980), Moon (1985) and Sepulchre (1987). Later Herbert novels, which dump these characterisations, lack the searingly sadistic savagery of his earlier works.

This Australian-made adaption of James Herbert’s The Survivor (1977) is a huge disappointment. Directed by actor David Hemmings, probably best known for Blow Up (1966), this naturally dumps the alternately interspersed chapters and comes out disgracefully tame. It could have been made to work but David Hemmings’s attempts to build atmosphere are tediously drawn out. The payoffs frequently verge on the ludicrous – like the scene where Jenny Agutter is possessed or the woeful attempt to make a batch of photos in a developing vat seem threatening.

All that is left of the book is a twist ending – see below – that a show like The Twilight Zone (1959-63) would have gotten over in a third of the time. Robert Powell gives a typically lofty and impenetrable performance. When asked what he had thought about the film in an interview, James Herbert confessed that it had made him fall asleep.

The Survivor is [PLOT SPOILERS] a rehash of Ambrose Bierce’s An Occurrence at Owl Creek Bridge (1891), which was filmed as An Occurence at Owl Creek Bridge (1962). In the story, a man is hung but the noose breaks, allowing him to escape whereupon he runs home to his wife, only for his neck to snap just as he arrives and everything is revealed as an hallucination that occurs in the last seconds before his death.

The Survivor is discussed in the documentary Not Quite Hollywood: The Wild, Untold Story of Ozploitation! (2008).

Other James Herbert screen adaptations are:– Deadly Eyes (1982), adapted from The Rats; Fluke (1995) about a man reincarnated as a dog; the ghost story Haunted (1995); the ghost story tv mini-series The Secret of Crickley Hall (2012); and The Unholy (2021) about a sinister miracle-healing girl.