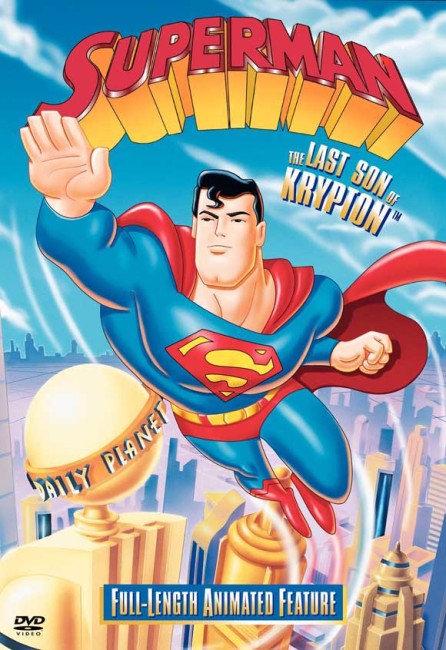 On the planet Krypton, the scientist Jor-el determines that the planet is about to explode due to geological instability. The ruling council dismisses this idea after the planetary computer Brainiac rejects Jor-el’s calculations. However, Jor-el discovers that the treacherous Brainiac has lied and is planning to evacuate its CPU from Krypton. Branded as a criminal by Brainiac and hunted as a fugitive by Kryptonian law enforcement, Jor-el places his infant son Kal-el in a rocketship and launches it just before Krypton explodes. The rocket travels through hyperspace to Earth where it crashes in Smallville, Kansas and is found by Jonathan and Martha Kent. The Kents adopt the infant Kal-el as their own son, naming him Clark. As Clark grows into a young man, he discovers that he has remarkable powers and abilities. Moving to Metropolis, Clark takes a job as a reporter with the Daily Planet newspaper where he meets feisty fellow reporter Lois Lane. Clark also emerges from behind his glasses in a caped costume and uses his superpowers to help the city. Lois gives him the name Superman. He and Lois then discover that billionaire entrepreneur Lex Luthor has been illicitly selling robotic weapons to Kaznian terrorists.

Superman: The Last Son of Krypton was the pilot film for the animated tv series Superman (1996-2000). (The series actually has no name and is only represented by the Superman ‘S’ logo but is given the name Superman throughout this site for ease of titling). In some places, the pilot was screened on tv as a movie, in others was broken up into a three-part episode entitled The Last Son of Krypton. The pilot was later released as a separate video/dvd movie, which is viewed here.

The Superman animated series came from the creative team of Alan Burnett, Paul Dini and Bruce W. Timm who had previously made the superb animated Batman (1992-4) tv series, as well as several feature-length Batman spin-off films and then the original futuristic Batman Beyond/Batman of the Future (1999-2001) series. Subsequent to Superman, various of the creative team went onto make other animated DC Comics adaptations with Justice League/Justice League Unlimited (2001-5), Teen Titans (2003), Krypto the Superdog (2005) and Green Lantern: The Animated Series (2011-3). All of these have done an excellent job of bringing characters from the DC Comics pantheon to the screen. Batman, in particular, imported the dark and brooding look of the Tim Burton Batman films into the realm of the children’s cartoon, creating something substantially more adult than the genre had seen before. In both Superman and Justice League, the series’ were notable for their spectacular battles and feats of superheroism.

Superman: The Last Son of Krypton keeps great faith to the comic-book Superman. The design team throws out the depiction of a crystalline Krypton that came in in the Christopher Reeve movies and return to the quasi-Grecian futuristic look of the Silver Age Superman comics. Lois Lane even gets a line comparing the as-yet unnamed superhero to Nietzsche’s Superman (the name that inspired Jerry Siegel and Joe Shuster in the original comic-books), which is then turned around and suggested as a name. There is even a cameo appearance from Bibbo Bibbowski, a minor character from the comics who was created as a spoof of Popeye.

Equally, Superman: The Last Son of Krypton offers up some interesting interpretations of aspects of the comic-book. Brainiac, who in his various comic-book incarnations is usually a green-skinned alien or an android from the planet Colu, has his origin rewritten to make him into the Kryptonian super-computer. (In later episodes of the animated tv series, Brainiac moved through the universe assimilating information – not unlike Star Trek‘s The Borg Collective – and took on humanoid form).

In an interesting twist on the Kryptonian origin stories, Jor-el is identified as the inventor of The Phantom Zone and comes up with the idea of putting the inhabitants of Krypton inside The Phantom Zone and sending the tiny single person rocketship to another planet where the Kryptonians could then be removed and allowed to reestablish their community. As usual, the Kryptonian council dismisses Jor-el’s findings – but this time because the self-interested Brainiac has misled them. Oddly, at no point in the film do we ever get any explanation of Superman’s powers – none of the usual yellow sun or denser gravity theories offered up – rather his powers just ‘are’.

Though a concerted effort has been made here to break away from the Christopher Reeve movies, many ideas that were introduced by the films are retained here – such as Lex Luthor becoming a businessman rather than a scientific genius, the ‘S’ seal on Superman’s chest being a family crest and the hologram left by Superman’s parents explaining his origins. Much of Superman: The Last Son of Krypton follows the essential origin story and plot of the first Christopher Reeve movie Superman (1978).

One of the finest things about Radomski, Timm and Burnett’s Superman series was the fabulous superheroic action scenes. There is a wonderful sequence here with Superman saving an airliner from crashing and bringing it down to a landing in a park – a sequence that was almost recreated shot-for-shot by Bryan Singer in Superman Returns (2006). Towards the end of the film, there is a spectacular knockdown battle between Superman and John Corben in the Lexor robotic suit. On the minus side, the Kryptonian scenes tend to be undercut by the superfluous need to have to turn them into action sequences – Jor-el fighting off a monster as he takes geological measurements in the cave, his flight from the Kryptonian authorities and a flying vehicle chase. Once the film arrives at Metropolis, the film takes on a wonderfully stylized Art Deco look – a design scheme that became even more pronounced in the subsequent series.

Actor Tim Daly, best known for tv’s Wings (1990-7), gives a fine and authoritative voicing to Superman. Particularly good is Dana Delany’s Lois Lane. Previous screen Lois’s – notably Margot Kidder in the Christopher Reeve movies and Teri Hatcher in tv’s Lois and Clark: The New Adventures of Superman (1993-7) – have been cast in the Meg Ryan mold – a ditzy, somewhat confused, even airheaded, woman who sits pining for true love. By contrast, Dana Delany gives us an assertive motormouth Lois and a go-getter that runs rings around Clark. One of the series’ best castings is also Clancy Brown whose mellifluous basso voicing makes for a great Lex Luthor.