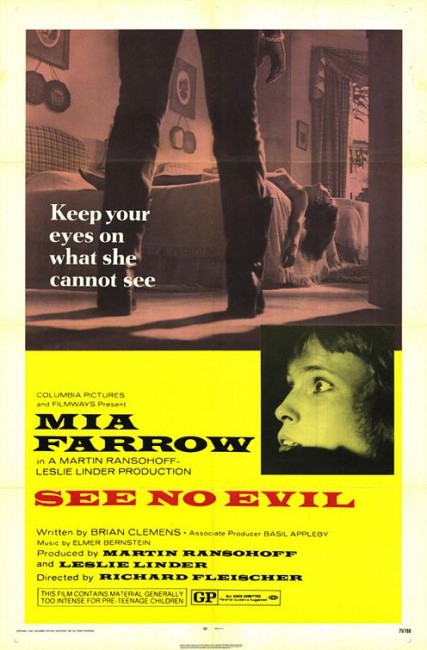 The blind Sarah goes to stay on her uncle’s farm in the English countryside. While Sarah is out with her old boyfriend, a killer slaughters her uncle, aunt and cousin. She returns home, unaware of the bodies in the house, even in her own bedroom. The killer then returns for the locket he has dropped. When the killer finds Sarah there, unaware of his presence, he determines to dispose of her as well.

This little seen psycho-thriller was a fruitful collaboration between British screenwriter Brian Clemens and American director Richard Fleischer. Brian Clemens has found acclaimed as producer and story editor on tv’s cult The Avengers (1962-9) and later as creator of The Professionals (1977-83) and writer, sometimes director (see below for his other genre films). In the director’s chair was Richard Fleischer, a versatile American director of vehicles such as 20,000 Leagues Under the Sea (1954) and Fantastic Voyage (1966) among others (see below). Alas, See No Evil was little seen when it came and is one of Richard Fleischer’s rare flops. It is also a film that has failed to ever emerge into video/dvd release.

Brian Clemens essentially reworks the basic set-up of the Audrey Hepburn-Alan Arkin thriller Wait Until Dark (1967), stripping away the contorted crime caper plot and turning it into a psycho-thriller. Clemens is unconcerned with anything more than the minimal set-up required to get to the cat-and-mouse game. Once there, Richard Fleischer is in his element with Mia Farrow’s character unaware of bodies in the bed next to her, the killer rifling the pockets of her clothes while she bathes and so on. Fleischer’s confident use of low-set, wide-angle lenses creates a strong sense of unease. Mia Farrow, the only recognizable name on board, is good. The film’s principal failing is the denouement where the unmasking of the killer comes without any significance.